Carson City is a real city now. No, really.

There are lots of ways to measure this, but in my mind the true mark of a city is whether or not you can do all your Christmas shopping there. Amazingly perhaps, if you haven’t been paying attention, Carson City qualifies. There are brand name box stores clustered here and there in Carson City now, along with a zesty sprinkle of smaller shops downtown.

More than that, there are meals awaiting that you’ll describe fondly and in detail when you get home, and as I have pointed out before, Carson City is no longer a one-martini town after dark. On top of that, there are hotels! In living memory there have always been motels in Carson City — it’s at the junction of US 50 and 395 — but hotels have been scarce since the 19th century. Now along with the motels, they welcome a growing number of visitors from eastern Nevada who make regular pilgrimages to Costco, Trader Joe’s, Home Depot and Lowe’s, stay overnight in comfort and go back home to Elko or Austin or Ely with a quiet glow of satisfied self-indulgence.

Who knew you could come to Carson City for the fun of it?

Carson Street is the great north-south boulevard that was US 395 until the freeway bypass of a few years ago, and it turns out you can drive Carson Street from one end to the other and see 90% of what a visitor is looking for in the way of dining and lodging, and a lot of the shopping too. And so with the major exception of the Gold Dust West (with bowling alleys!) east on US 50, a drive the length of Carson Street constitutes a self-guided tour to most of the city’s restaurants, hotels and motels, and some of its most appealing attractions. So let’s do it. First, a map:

We’ll start at the far south side of town, about a mile past the junction of US 50 with US 395 where there’s major shopping on the west side of the road: Wal-Mart, Best Buy, Bed Bath & Beyond, Michael’s, Marshalls, Petco — you get the idea. As I see it, the star of this show and a modern pioneer is Trader Joe’s. I like Trader Joe’s because I always feel as if I’m shopping for a party even though I’m almost always not. I think the Trader was a pioneer, and his arrival marked the first flowering of this new Carson City. The local In-n-Out Burger is also here as reason #2 to pull in.

And less than another mile to the south is Khristopher’s Ristorante*. It’s actually across the line in Douglas County but we claim it for Carson City anyhow; watch for it on the right as you go down the hill toward Mica Drive, and turn right when you get there.

Khristopher’s is as far south as we go, so now we’re turning around and heading back up the hill and into town, heading north past that big shopping center on the left, past Bodine’s — Costco is a short distance to the left up Clear Creek Road — and the junction with US 50 is just ahead. 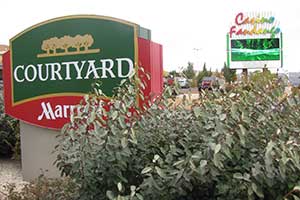 Just beyond that is an agreeable cluster of attractions: the Galaxy movie theater, the full-service Casino Fandango and a Courtyard by Marriott hotel. I’d stay there if I’d driven in from Ely or Tonopah craving a taste of city life. It doesn’t get more urban than this in Carson City. 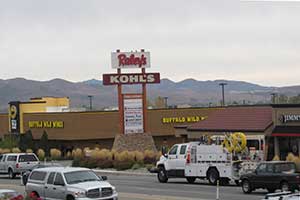 We continue north, car dealers to the left of us, shopping to the right. Watch for El Charro Avitia* on the right. There’s a new Peg’s Glorified Ham and Eggs next to the Raley’s. Ahead there’s an Applebee’s on the left and Grandma Hattie’s on the right, and then the Nevada State Railroad Museum on the left, one of Nevada’s greatest attractions. This is a true treasure house, and provides a unique experience to visitors.

Fairview Avenue is the dividing line between the southern outskirts and the city itself. A left turn puts you into the Railroad Museum; take it before you go home. A right turn puts you on course for the 395/580 Freeway to Reno; don’t take it until you’re ready to leave.

Ahead on the right is the impressively large Sportsman’s World with a Bealls store right next door and the The Bead Store a bit to the north of that. There is a cluster of small restaurants around back behind the big stores on the Stewart Street side.

Next on the right is the Bistro at Tahoe Ridge, just beyond that is Red’s Old 395* and across the street from both of them is the Wyndham Gardens Hotel with the Max Casino inside. And just north of that: the Ormsby House. Aha, you might think as you approach the closest thing Carson City has to a high-rise hotel, maybe I will stay there tonight. Not this trip, you won’t.

The Ormsby House is in a state of arrested renovation. I’m told the owner is paying for the work from cashflow from another business rather than borrow money to do it. It has been closed for — is it ten? 15? — years so far, although each year on the appropriate date, the minimum number of slot machines (2) are wheeled into the empty casino floor, declared open for business and someone puts a nickel into each one and pulls the handles. Thus is the gaming license preserved.

North of Fifth Street we are entering the heart of town.

On the right is the Legislature building and the State Capitol within the thickly forested Capitol Plaza grounds. The most recently planted of these trees, a scented cedar, commemorates the state’s 150th birthday in 2014. The Capitol Building is an exceptional building and open to visit during the business day. You can spend an hour here, and you should, especially if you’re a Nevadan — it’s yours.

Across Carson Street is a row of commercial buildings where the local flavors begin to emerge, vivacious and beguiling, right across the street from the stern stone temples housing our basic institutions of government. Comma Coffee* is in this stretch as are Firkin & Fox and Pop’s Diner, before government intrudes once again with more stone temples. 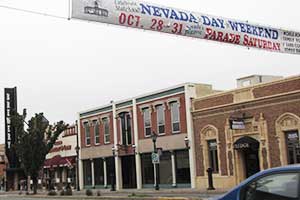 For the next several blocks there’s commerce on the west side of Carson Street and on Curry Street a block west.

Food, drink and small shops in a stretch of four or five blocks. Telegraph Street is also busy with The Westside Pour House (the former Mo & Sluggo’s) and the Nevada Day Store, both on West Telegraph Street. You’ll want to come back here and park so you can stroll and explore old Carson City in this New Age.

On the east side of Carson Street there’s the brick Carson City City Hall and then three of the city’s most popular restaurants, Basil Thai*, Garibaldi’s Ristorante Italiano and Kim Lee’s Sushi & Oyster Bar on the corner.

Just beyond them is the old Post Office, a late Victorian pile of bricks with a clock tower, now the home of the Nevada Division of Tourism, the state’s marketing arm for its largest industry. And just north of that is the Carson City Nugget, the first modern gambling venue in the city about 60 years ago. The parking lot across the street was once the Arlington Hotel, the grandest hotel of its day — which began with its construction in 1877 and continued until it was torn down in 1966.

North of Robinson Street on the west side is the Nevada State Museum which occupies the former United States Mint — another reason you’ll want to spend some time downtown. And on the southwest corner of Washington Street is the Carson City Visitors Center, the perfect source of further information about local area recreation resources.

The next several blocks are motel-heavy. Watch on your left for Heidi’s, quite popular for breakfast and lunch at the corner of William Street. Cast your gaze to the right as you cross William and notice The Cracker Box*, famous for bigboy breakfasts. Adele’s*, a local shrine to human happiness (gastronomic division), is further north, on the left.

We’re into motels here. There’s a shopping center at Winnie Lane with the San Marcos Grill and Bleu Cafe in it, both worthy of attention.

A little farther north is Pho Country. Glen Eagles Restaurant and Lounge*, a highly regarded restaurant for 60 years, is ahead on the left, and farther still Mi Casa Too on the right.

The Carson Tahoe Hospital complex is visible on the left ahead, perhaps accounting for the presence of the Holiday Inn Express and the Hampton House on the east side of Carson Street just before the Freeway at the north end of town.

If you go that far, turn around and come back south as far as College Parkway; take it to the east as far as Roop Street and turn south. On the left just past the Wal-Mart/Home Depot complex you’ll see the popular Villa Basque Cafe & Deli for breakfast and lunch, and right next to it Z Bistro* for an exceptional dinner. 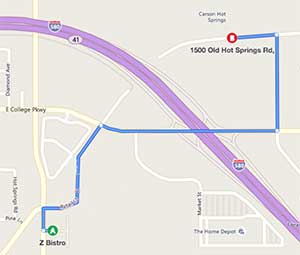 There’s one more restaurant you should know about but it’s a little off the beaten path and you’ll want to bring your bathing suit too. Sassafras bills itself as an eclectic food joint and is located at Carson Hot Springs, a historic and locally beloved resort built around the pool and soaky tubs. It’s not so easy to find since the Freeway was built, so here’s a little map. 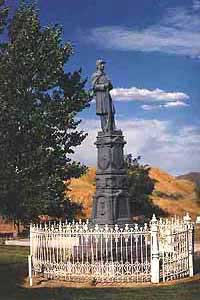 Return from this digression and continue south a short distance on Roop Street to the Lone Mountain Cemetery, which contains the remains of some of Nevada’s most prominent citizens, and is guarded by a cast-iron sentry. This is a pioneer burying ground of considerable interest. Keep going south, back into the city and have fun with what you’ve seen, learned about and grown curious about.

There have been fine restaurants in Carson City over the years, but not very many at a time. Now there are at least a dozen excellent choices — more than enough if you’re just visiting, three or four of which will become favorites if you move here. (Complete list of Carson City Restaurants here)

My Personal ‘Top Ten’ faves in Carson City are marked by an asterisk in the text above. We welcome your Carson City recommendations in the Comments form below.