On October 31, 1864, President Abraham Lincoln signed the Act which created Nevada a state in the Union. As his pen touched the document the Sun and the Moon were in the sign of Scorpio with her ruling planet Pluto set in midheaven. Thus Nevada is a double Scorpio with Leo ascending. 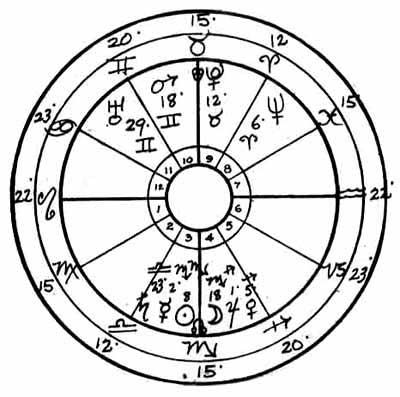 Scorpio is the most secretive and powerful section of the Zodiac. It merges the spiritual and the material. It is the world, the flesh, the Devil: and also the spirit which seeks to temper them.

It is represented by the Scorpion (death), the Snake (wisdom) and the Eagle (spiritual attainment). Scorpion, snake and eagle, symbols of Scorpio and creatures of Nevada.

Dreams are an important channel between the spiritual and material worlds. Nevada has always been a peddler of dreams, rags to riches, the alluring promise of the gold fields and the green felt tables. In no other sign do the forces of light and freedom so closely approach the forces of darkness and slavery.

The whole nature of the state is fiercely independent, quite capable of telling the rest of the world where to get off, and solidly unwilling to let anyone else tell it what to do. Nevada has always tempted a person to ride the fine line. Anything goes, any time. This state will not be your stern father or your compassionate mother.

Mythologically, Pluto, the rich one, is ruler of the Underworld and the underground regions of the earth. He wraps himself in a concealing cape and wears a helmet producing invisibility. Nevada is historically notorious as a haven for underworld characters, from “Farmer” Peel in the 1860s to Baby Face Nelson in the 1930s. Well-known for being little-known, Howard Hughes also sought obscurity in the folds of Nevada.

The subterranean occupation of mining is within the domain of Scorpio and Pluto, and the Moon in the fourth house indicates great wealth to back Nevada’s independent attitude.

Scorpio: death and sex. Legal prostitution is an unusual facet of our state. We are not yet famous for death or dying, but they’re working on it, as the architects of the Yucca Mountain Nuclear Waste Repository prepare to build.

But Nevada is also the phoenix rising from the ashes. As important within the life cycle as sex, conception and death is the promise of renewal and resurrection.

The rising sign, or ascendant, describes the outward personality and physical appearance of a person or place. Leo is a fire sign, ruled by the Sun, hot and dry like most of Nevada. Leo is a sign annoyed by smallness, ruling grand ideas and large-scale ambitions. The enormous mountains, vast deserts and great valleys of Nevada’s 110,000 square miles keep the grand image.

Black and shades of red are kin to Scorpio and Leo. Black and red dominate the motifs of casinos and gaming houses throughout the state. Also the Moon and its node are in conjunction with each other, bringing a great deal of luck. Moreover, this conjunction occurs at the very nadir of the chart, at midnight, between the Sun and the Moon. No wonder that inside the state’s casinos midnight and noon are indistinguishable.

On Nevada’s chart Pluto is in opposition to the Moon. Pluto shares some of the nature of Mars, and is something of a daredevil. Pluto is in conjunction with Mars in the Midheaven, both of which have a great deal to do with warfare. Thus it is not surprising that Nevada was admitted to the Union during the Civil War (“Battle Born” is the state motto), nor that the nuclear bomb testing facility is here, the ammunition depot at Hawthorne, and Yucca Mountain is still to come. Our relationship to the rest of the nation is dominated by warfare (and its attendant death) rather than by what we do to support ourselves.

In the third house we see indications of close neighbors and relatives. In Nevada’s case, with the Sun, Mercury and Saturn there, the suggestion is of the close ties we have with Utah and California. The Mormon Church and the California tourist both exert profound influences on Nevada life.

Uranus is in conjunction with Mercury, activating our hopes and desires. The position of Uranus also suggests that Nevadans tend to be eccentric and individualistic.

And the conjunction of Mars and Pluto in the midheaven suggests violent action of some kind. The image is of a tidal wave, clearly farfetched in our inland desert state, but the impression remains of a catastrophic event of enormous magnitude in Nevada’s future.

Nevada’s chart is that of a renegade state, proud and independent, and exemplifying the spirit of the wild West.

From the Gold Hill News Archive