For more than five years residents of the Comstock tried to keep an upstart mining company from digging an enormous pit mine in the the Virginia City National Historic Landmark just above Devil’s Gate in Gold Canyon. Despite our efforts the pit was dug.

But the mine was a bigger failure than the resistance. More than $200 million in stockholder money spent over five years with nothing to show for it except an endless chain of zeros in the profit column.

Why? Because the company’s inexperienced executives indulged in aspirational prognostications, and what they discovered when they dug was: there was no ore there. 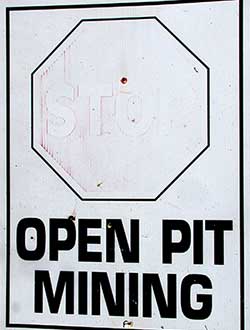 So, let’s make lemonade. Let’s get our Tourism marketers to promote the Lucerne Pit as a new attraction on the Comstock. Call it the Monument to Futility or to Overenthusiasm — why not hold a national contest to select the name? After all, it will be a big part of the National Landmark for the next hundred thousand years or so.

A Viewpoint with parking will invite visitors to look into the abyss, and informational signage can tell the story of how Comstock Mining Inc (or is it LLC?) became the biggest loser in the history of the Lode. These informational placards can perpetuate the names of the County Commissioners who so eagerly welcomed CMI into Storey County to dig this hole without even a credit check. 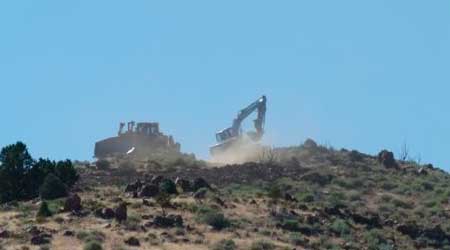 Mention can be made of the company’s unwillingness to monitor air quality as it put dust into the air from this national priority mercury Superfund site. And the $250,000 fine imposed on CMI for a major environmnetal violation adds a touch of humor. With the eager assent of Storey officials, most of that amount went for the purchase of a street sweeper delivered to the county, which the company described as a ‘Special Project’ when it was handed over. Everyone was smiling, presumably to keep from laughing out loud. 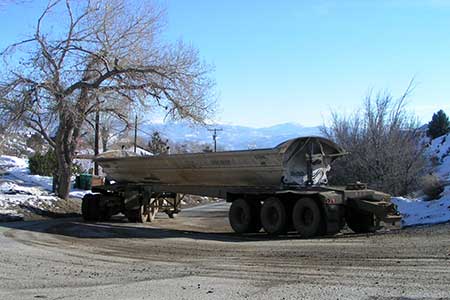 The infamous “Gentlemen’s Agreement” regarding the company’s ore trucks on the highway can be cited as a hint of things to come. “Some people scoff at criticism of CMI for reneging on its promises,” one such critic said. “But doesn’t it seem obvious that people who can’t be trusted in small things shouldn’t be trusted in big ones?”
The displays can point out the futility of trying to replicate the glory days of the 19th century in modern times. This was a great place to mine gold and silver in the 19th century, now not so much. 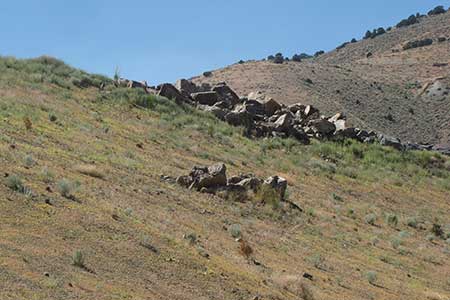 As visitors to the Overlook take in the view, they will not see much of the Comstock as it was. Apart from the huge hole, the company has completed ‘reclamation’ of some of its upcanyon property, and has made a new bed for Gold Creek on its way to Devil’s Gate. Mom Nature’s treatment of the Comstock landscape was rough and rocky, with holes all through it. As J. Ross Browne famously described it, this was a place where the bones of the earth show through its skin.

Where the company had been at work, Gold Canyon has had a make-over. No more tangles of rusting cable poking out of the tumbled ground, no brick footings from long-forgotten structures devoted to long-forgotten uses, no more tipped and tilted posts, flattened oil cans, shards of crockery, broken bottles, traces of old roads interlacing on the hillsides. All gone from the west side of the canyon.

This section of old ground has been given a new look better suited to a suburban park than a historic landmark on the western frontier. Every contour is smooth, supple, modest and mild, with focus points of big boulders strewn carefully about for contrast. This is in contrast to the scarred and raggedy landscape that existed here, and that it pretends to reclaim.

If this were an opera — which it deserves to be — the fat lady would be standing in the wings, spraying her throat.

So prevalent is the local understanding that CMI has failed that the Comstock Chronicle (one of two newspapers in Virginia City) asked the celebrated John Tyson, a former CMI employee, to act like a journalist and interview CMI executive Scott Jolcover about it. The resulting article — reposted here — should be required reading in journalism schools as a sweet piece of puffery. John lobbed his questions over in slo-mo, big fatties the size of beach balls, whistling Yankee Doodle on their way to the plate, so even a blind man could hit them.

He concluded his article, “So the question remains, is CMI solvent or is time running out? According to Jolcover, mining has its ups and downs just like in years past, but the mine is still operating. And to this reporter who has to take things at face value, I couldn’t help but notice the gate is still open. There are still cars in the parking lot. There are still people working in the main building and it appears no one is ready to throw out the cat, turn off the lights and lock the doors.” [emphasis added]

Needless to say, a reporter who takes things at face value is about as useful as tits on a boar. The article reminds me of a story about a man who fell from the Empire State Building, and was heard to call out as he passed the tenth floor on his way to the sidewalk, “I’m all right so far!”

Comments on the company message board weren’t so optimistic: “I see the Gold Hill Hotel is on the market again — $1.4 million. Can you say cash flow problems?”

“The Gold Hotel has always been a money pit, that’s why it was sold by the previous owner. Maybe CMI didn’t do due diligence. Or maybe they thought they needed a tax write off for all the $$ they would make on the Lucerne pit mine. Or perhaps they were seeking the prestige (a prestige-seeker and his money are soon parted), of owning an historic landmark that would demonstrate their commitment to historic preservation and being ‘part of the community’, neither of which anyone believes.”

“Two more mining trucks were being loaded on transporters to be carried away this morning. Hope they have enough trucks left to carry the impending bonanza of gold to the leach pad.”

“Or enough trucks to transport their office furniture to the auction block.”