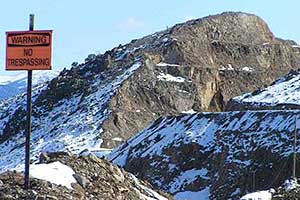 The CRA is not opposed to mining, and we don’t oppose pit mining where it is appropriate and done responsibly. But it’s not appropriate within a National Historic Landmark, in the national priority Carson River Mercury Superfund site, or where people live. We’re all three. CMI has embarrassed itself and the state’s mining industry with its clumsy and increasingly desperate efforts to avoid environmental oversight.

The struggle began in November 2010 when CMI’s president, Corrado De Gasperis, appeared at a Silver City Town Meeting and announced the company’s plan to turn about 15% of the historic town into thin air. The great hole it planned at the Dayton Consolidated mine would take the southwestern part of Silver City with it.

“We’re here and we’re doing this, so get used to it,” De Gasperis said, or words to that effect. Before he put away his Power Point presentation the Comstock Residents Association was convened in the back of the room and the war was on.

It has been on ever since.

Here’s what’s happening now. Recently the BLM changed its rules for Right Of Way (ROW) access on public lands, requiring everyone with a permit to re-apply, including CMI. In October, 2011, the company applied for ROW access to use the haul road connecting the Lucerne Pit with the processing facility at American Flat. In this application CMI stated emphatically (three times) that it would be crossing public land.

When the BLM returned the application as incomplete (no Mining Plan, among other discrepancies), the company did not reapply.

Nevertheless, in the spring of this year CMI’s beleaguered CEO launched a 76-trombone “March to Production”. De Gasperis promised shareholders that this golden outcome would occur this summer, and there would be an August pour (meaning an ingot of precious metals derived from the local ore).

And yet the leaves tore themselves off the calendar . . . April . . . May . . . June . . . and still no ore. For a time an endless chain of trucks came grinding up the highway hauling materials for the expanded leach pad in American Flat, and then hurrying back down empty to get another load. There was a truck going by every two minutes.

But without the haul road, how could CMI move any ore? Had it literally dug itself a hole it couldn’t climb out of? So it seemed.

And then De Gasperis made a sudden, desperate move: he closed off the haul road to the public and started sending the 50-ton Haul-Paks over it without permission, asserting that it was private land after all, and under company control.

That decision defines CMI: Fumble the application, but then take what you want anyhow, and make up a plausible-sounding story to justify it if you get caught.

And of course CMI got caught: BLM served the company with a Cease & Desist Order citing Trespass, and closed the haul road to CMI’s traffic. The company has been given temporary ROW access for street-legal vehicles (but not the huge ore trucks) on a second road under dispute.

Now CMI is desperate. It can’t operate but it can still wriggle. Early in July the company requested a change in the County Special Use Permit (SUP) modified most recently in 2004.

If the request is granted, fully-laden truck and trailer combinations will enter the highway here from a dead stop and proceed up the steep grade, adding an unexpected obstruction on the main southern access road to Virginia City.

It wants to use the state highway to haul its ore and it wants no County constraints on the kind of trucks it uses. The request was presented on the Planning Commission agenda as a “minor administrative adjustment”.

CRA objected, and on July 19 the court room upstairs in the Storey County Court House was packed as the Planning Commission meeting was called to order at 6 pm. For almost five hours company employees and contractors spoke in favor of granting the request and local citizens spoke against it.

The BLM representatives performed well, explaining in simple and straightforward terms the process by which CMI had been red-tagged.

But it was Corrado De Gasperis who took the Oscar. Once again he flung himself and his “March to Production” on the mercy of the Commissioners, groveling and whining over the bad hand that fate had dealt him. As hard as he and his minions had tried to be compliant, he sobbed, they hadn’t been able to satisfy the rigid demands of the heartless regulators. Never once had the company avoided any environmental rule or regulation, he sniffled, his innocent eyes brimming with tears, and the dog ate his homework.

When a nearby spectator laughed under his breath, Corrado called him out: “When have we?”

“When you withdrew your ROW application to use the haul road because you don’t dare face an Environmental Impact Study,” the man said. (It was Larry Wahrenbrock of Silver City).

Corrado glared at him for a moment, and then wilted. “I wish you were in my shoes,” he said.

In the end the people lost. The Commissioners voted 3-2 for approval. But the people are winning the war. We’re Grant, CMI is Lee.

Or, the Commissioners might decide that the time for “minor administrative adjustments” lapsed many years ago and refuse the request, while inviting the company to apply for a new SUP with the conditions it wants.

If the company succeeds in pit mining lower Gold Hill, the integrity of the National Historic Landmark will be ruined. Our history will be hauled off, pulverized and treated with cyanide like the rest and when it is done there will be nothing but an enormous empty crater, forever.

And when it becomes a poison pond in our grandchildren’s time, as the Anaconda pit at Yerington has become in ours, they might wish CMI had been made to follow the rules from the beginning.