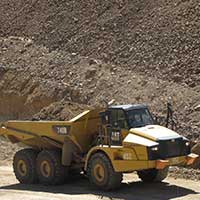 By Friday February 7 the Lyon County Commissioners and the mining company had been served with notice of the action.

The battle for Silver City has been joined!

“We now have an opportunity for an impartial judicial review of the action taken at the hearing on January 2nd,” said Silver City resident and CRA Board member Gayle Sherman. “What we have asked for from the beginning of this decision process was a level playing field when it comes to land use decisions. But the January 2nd hearing was far from a level playing field — CMI purchased its favorable decision and we are requesting that the decision be overturned.”

CRA attorney John Marshall filed the complaint “. . . because Lyon County provided no basis to depart from its prior precedent, acted contrary to law and without proper notice and record support, and was unduly influenced.” The 35-page document notes the procedural errors made by the Commissioners and details the history of the Master Plan, its creation and modification over the nearly 50 years it has been in place and relied upon.

The complaint points out the $17,500 contributed to successful candidate Bob Hastings — well over half his total cash contributions — set an amazing record. “[This amount] dwarfed all prior contributions to any candidate from a single interest by 350 percent.” The complaint also noticed the company’s employment of family and friends of county officials, including Commissioners Keller and Hastings.

It discusses at some length the secret meeting of Commissioners Keller and Mortensen with CMI officials and contractors on New Year’s Day. It states: “Lyon County BOC violated both the Nevada Open Meeting Law requirements by failing to agendize the action actually taken and deliberating on the action outside of a public hearing.” Thus CRA contends it’s void.

Thus the basis for the First Cause of Action is Violation of the Open Meeting Law. The Second Cause of Action is Denial of Due Process, because both Keller and Hastings took advantage of their position to reward their benefactor, CMI, and by doing so violated the rights of the Silver City residents. They should have recused themselves, but did not, and therefore the vote is void on a second count.

The Third Cause of Action is for Abuse of Discretion, in that the Commission’s vote constitutes Spot Zoning, which is contrary to the Master Plan.

Silver City resident Theo McCormick resigned from the Lyon County School Board less than month after the Commission’s vote. “I find I must spend my time defending my town from open pit mining and raising money to fight Lyon County government,” he wrote in his letter of resignation. “This unfortunate decision by the Lyon County Commissioners leaves me no time for my duties as a School Board trustee.

“I want to be clear to everyone,” McCormick wrote. “I am proud of the Lyon County School District and would love to continue serving on the School Board, but my time and money must now be spent fighting for the survival of my home town.”

The Complaint/Petition ends with the request that the court rule in CRA’s favor, that the Causes of Action valid, and that Lyon County’s approval of the CMI requests is null and void. It asks for an injunction preventing the county from going forward on its erroneous path, and for the payment of costs incurred in bringing the suit, including legal expenses.

The Comstock Residents Association is a community focused public interest group representing the residents of Virginia City, Gold Hill, Silver City and Dayton, with a common interest in preserving the integrity and sustainability of the Virginia City National Historic Landmark and the quality of life in the Comstock communities it embraces.