Originally the highway was to reopen on November 12, then postponed to November 22, still in advance of Thanksgiving, and then postponed again into December. It was this third postponement that the company is crowing about being ahead of, adding “These improvements will enhance the quality of life on the Comstock and reduce costs to the state and local municipalities, and thus, taxpayers.”

The ‘improvements’ were carried out to benefit the mining company after it had shaved the east wall of the pit too steep, too deep and too close to the road. When SR 342 collapsed, Virginia City’s southern connection to the outside world was severed and traffic was rerouted via the serpentine SR 341, built in the 1930s for the slow moving trucks of the time. Silver City was bypassed and the sudden disappearance of the daily traffic during Hot August Nights caused the closing of the town’s only retail establishment. Doodads was a fun and friendly little store by the side of the road in Silver City, and the town is poorer without it.

Actually, almost everybody on the Comstock is poorer with CMI struggling in our midst, and that includes employees who’ve been laid off wholesale and the company’s investors. CMI stock has fluttered down from 50 cents to 38 cents, and is trembling at around 40 cents now.

Here’s an assessment from the Yahoo Message Board for LODE:
“cmi appears to be in a death spiral. Been following since 2007. In 8 years has burned thru tens of millions of dollars without a penny of profit to show for it. Been surviving solely thru borrowing and offerings. Shares have been diluted by a factor of 8 since the reverse split. Shareholders have taken a beating while officers have stuffed their pockets. No future here unless gold soars, which is unlikely. Time for an honest assessment folks.” 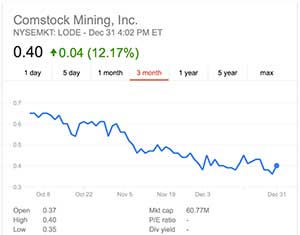 Here’s another:
“I’m not expecting anything approaching profitability next year. In the October interview the CEO said; ‘2016 is really going to be jam-packed with catalysts in the sense of major achievements in mine development, reserve development and resource expansion. And quite frankly, we don’t want to be involved in anything other than that right now.’
“Development, some more development and expansion. All needful things but not money makers.
It’s become obvious that they really misjudged the assets available for open pit mining and that is a real confidence shaker. I was and still am really pleased that there are no more preferred shares but I took the recent offering like a kick in the teeth.”

And a third:
“I have been in this for a very long time and have lost 75%. I will hold out and see how this plays next year,
I am disappointed in the results and probably should have sold when it was over 2.75.
“But like I said I am in for the long haul. Bashing does not help the situation and I made the decision to hold. And I am an optimist by nature.”

They seem unanimous in thinking only an optimist (or a fool?) would invest in this hole in the ground, but two of them are hanging on anyhow, shining examples of how strong the grip of Gold Fever can be.