I was born in Carson City Nevada in 1962 and grew up in Gold Hill. I spent my first 20 years on the Comstock Lode and at that time the Golden Gate Bar in Silver City was run by Pat Staab, a retired prison guard from San Quentin and his wife Betty, who had grown up performing in a traveling circus.

Betty made a point of collecting a card from every traveler who had one, and stapling it to the wall next to the pool table. I remember that wall of cards. I pored over it as a kid, and the thing that struck me the most was the distance these folks had come to have a beer at The Golden Gate. 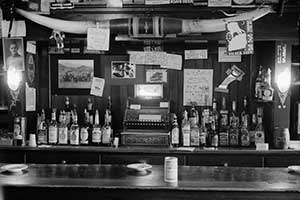 What strikes me now is that each card has a story behind it, and taken all together they are the story of America, or at least the part of America that made through the door of the Golden Gate, past the cage of “Baby Rattlers” set at the entrance to get them laughing. My goal is to take a card off the wall every so often and post the story it tells.