The first thing I looked at was the phone number. Pat and Betty took ownership of the Golden Gate Bar in the early 1950’s when the country was still calling with the numbering system that had been in use since the 1920s. Beginning in the mid-1950s, ATT began changing the exchanges across the country to the system that it uses today. Hal’s card has one of the older numbers. 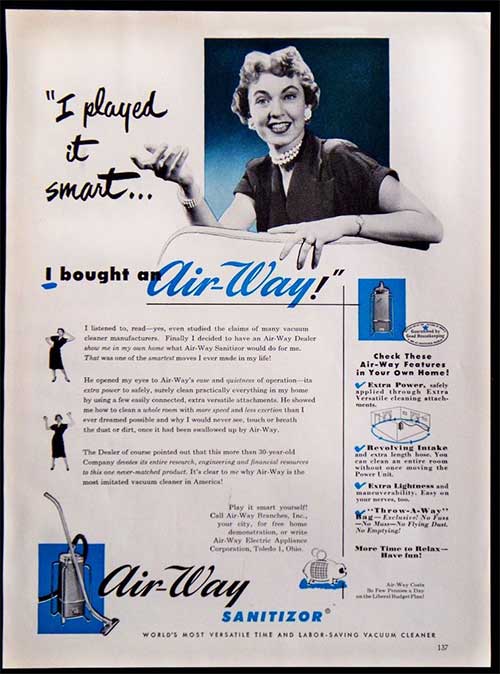 Then I looked at the company where he worked. The Airway Vacuum Cleaner was one of four competing floor cleaning machines introduced during that heady period of time when women were being given more leisure time as machines like refrigerators, washing machines and other mechanical devices were easing the burden that women shouldered in the late 19th Century. The Airway Sanitizer 88 was the top of the line vacuum of the day and Airway was a leader in technological advances in vacuum technology.

They were the first company to move from an upright to a canister, first to introduce a second motor at the nozzle to agitate the carpet, and first to introduce the bag that filtered and “Sanitized” the air using a glycol substrate that they adhered to the sides of the bag. In the 1920’s the company spun off the motor manufacturing of the vacuum to a company that would become Black and Decker. 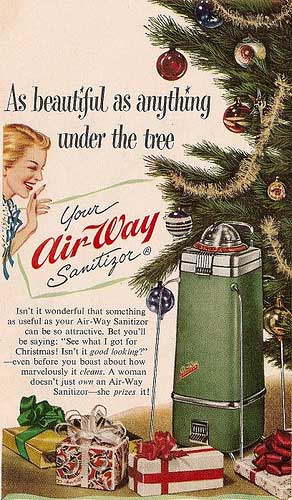 There are some cool vacuum websites and there are folks out there who collect them. An informative study of this innovative company that lasted into the 21st century could be where this story ends. 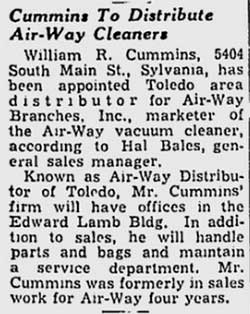 A search of Hal Bales provided a single mention of him in the November 23rd Edition of the Toledo Bladewhere he announced the installation of the Toledo Airway Sanitizer Dealer inside the Edward Lamb Building: 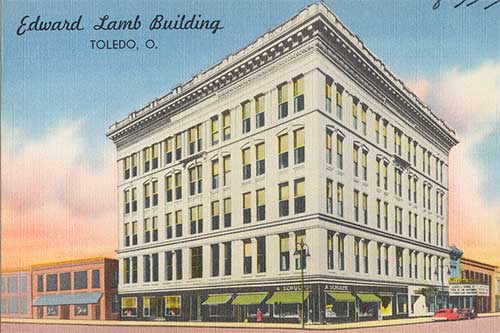 The Airway Company was purchased by Edward Lamb in 1936. It was one of his many corporate holdings and represented a modest part of his industrial business empire that at times included Holiday Plastics, Brazil Chemical Company, Aluminum Screen and Window Company, General Wire and Cable, Thompson Machinery, Lockwood and interestingly, the Nevada National Bank.

Edward Lamb (1901 – 1987) was a prototypical business tycoon, but his business success is just a part of what makes him interesting. One of ten children born to a Lake Erie fisherman, Edward Lamb worked his way through Dartmouth and law school being admitted to the bar in 1927. He worked for the the city of Toledo and soon left to build a successful firm representing corporations and local businesses.

In 1934 he became involved with what has been come to be known as one of the three most significant strikes in American History. Unemployment and crummy working conditions made conditions ripe for a strike which began on April 12, 1934. The Toledo Auto-Lite strike became known as the Battle of Toledo where, during a 5 day span, 10,000 strikers carried on a running street battle against 1300 National Guard called out to keep the peace. Lamb rose to the forefront of the fray and began to negotiate an agreement. He ultimately represented the unions in the legal battle that ensued during the settlement mediated by former President Taft.

He was a tireless Labor lawyer who was involved in over 330 separate legal battles where he sided with the workers and winning victories from American companies in the 30’s and 40’s He earned national attention when During his career he represented more than 75 unions and was arrested for contempt of court more than once while handling labor cases. In Anderson v. Mount Clemens Pottery Co, Lamb argued on behalf of workers of the Mount Clemens Pottery Company in Michigan who were required to report to work 14 minutes before their official starting time without being paid for the extra minutes. Known as the portal to portal case, the Supreme Court ruled in his favor in 1946.

In the 40’s he began accumulating newspapers and radio stations and in 1949 he was awarded the license to broadcast television in Erie, PA and at his at one time had stations in Cheyenne, Wyoming Scottsbluff, Nebraska, and Sterling, Colorado. By all accounts he was a prototypical American capitalist. And that could be where the story ends.

Lamb wrote a book that was complimentary toward Soviet Communism titled “Planned Economy of the Soviet Union” in 1934. In 1955 he was accused of being Communist sympathizer and Joe McCarthy used his muscle to try to get the FCC to not renew his license in 1955 (at the end of the trial that resulted in the renewal of the license, one of his cronies said “If Ted’s a Communist, he’s the only one in the world worth $60 million.”). He is on record as having visited Moscow and met with Fidel Castro in Cuba. He signed the Second Humanist Manifesto and his final book “The Shared Society” published in 1979 advocates a world community and predicts that uncontrolled, unplanned nations with extremes of wealth and poverty cannot exist much longer. He wrote that pro-United Nations book, he said in a 1979 interview with the Chicago Sun-Times, because “I have become increasingly aware of the appalling gap between the very rich and the very poor.”

Sometime in the late 50’s Hal stopped in the Golden Gate Bar and got a taste of Silver City.

If you have a comment or something to add to the story please put it in the comments.