What birds live in your backyard? December is the perfect time to find out, as it’s the month for the Christmas Bird Count (CBC), the longest citizen scientist project in the world. On Christmas Day in 1900, an ornithologist proposed that instead of shooting birds, they should be counted. Others agreed, and thus began this birding tradition. Since then, the count has grown to over 2,300 locations in 17 countries. You’re invited to participate in the Snake Valley (Baker) Christmas Bird Count!

Worried about not knowing birds well? Volunteers of any experience level are welcome, as extra eyes and ears to spot the birds can make all the difference. The most common birds in the Snake Valley CBC are some you probably already know: mallards, European starlings, horned larks, Brewer’s blackbirds, and pinyon jays. Bald eagles sometimes appear on the ranches, a belted kingfisher is a sought-after find at the Spring Creek Rearing Station, and American goldfinches can be located at birdfeeders. The long-term data show some interesting trends. For Baker, a number of bird species have appeared recently and grown in numbers, including rock pigeons, red-breasted nuthatches, Eurasian collared doves, and wild turkeys. Meanwhile, some bird species are declining, including sage sparrows and white-breasted nuthatches. 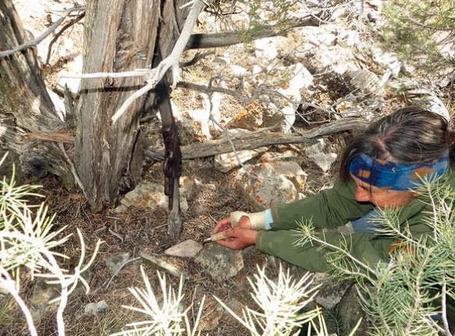 Who would have left their gun behind in the woods, propped up against a tree? A Winchester Model 1873 rifle was found by Great Basin National Park’s cultural resource manager in November 2014, and the resulting posts went viral. Everyone imagined the story that had led to the rifle being left there. Over the summer, the rifle was taken to the Buffalo Bill Center of the West in Cody, Wyoming to be cleaned and restored. Now it’s back at the park, and a grand unveiling will take place December 5 at 1 pm at the Lehman Caves Visitor Center. A special exhibit will be on display throughout the winter. For more information, call 775-234-7510.

Finally, although the shortest days of the year occur in December, some of the best sunsets are also found this month, bringing lots of color to cherish as we enter into the dark nights.