Now for some time travel. Buckle up, please.

While cleaning out an old building in Virginia City not so long ago, Winson Hong made a fascinating discovery. He found an advertising calendar from 1909, the inexpensive kind with the sponsor’s advertising and an illustration printed on a piece of card stock, and a small pad of 12 sheets, each one containing the dates for a month, stapled to that. The first two monthly leaves, for January and February, had been torn off, leaving March, 1909 showing.

The sponsor of the advertising calendar was Self & Sellman Mill & Building Co. of Reno. In 1909 the firm’s lumber and building supply yard was at 335 E. Fourth Street. “Sash, Doors, Mill Work, Paints, Oils, Glass. Estimates Furnished Free.” The calendar supplied the phone number of the office (754) and the home numbers of each of the company’s principals: Lucian B. Self, President, (150) and Calvin Sellman. Vice-President, (998). Self & Sellman continued in business until 1910, after which Calvin Sellman is listed in the city directory as a building contractor.

What makes it fascinating is the illustration. Here’s the caption beneath the photograph: “Indian Johnny’s father, mother, two sisters and an interpreter appealing to Governor Sparks to save the life of their son and brother, who was executed for the crime of murder at the Nevada State Prison December 7, 1906.” 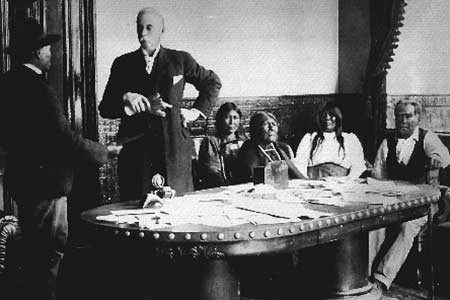 In the photograph the Governor is standing with his back to the family. Johnny’s mother looks like grief carved from granite, but all of them know what’s coming. They sit somber and silent. The governor has his gloves in his hand while the interpreter pleads for Johnny’s life. And isn’t he sneaking a look at his watch? Perhaps he has something important on his schedule.

At the Nevada Historical Society, we strap into a microfilm reader, and launch back to January 5, 1906.

From the Elko Daily Free Press:

From the officers we learn that the victim was a cripple, his left leg having been cut off near the hip. Detective Sullivan thinks from the description that he was a certain notorious crook. He was undoubtedly a hypo fiend as a syringe was found in his pocket. He was found lying across a fire with his back downward. and with several ties lying across his body. Part of his back, one arm and one side were literally cooked, the skin having burst and flesh protruded. His face was horribly slashed.

From the Wells Herald:

The throat of the murdered man had been cut from ear to ear, the head being almost severed from the body. The bones of both arms were broken, and the clothing cut and torn from the body and the shoe cut from his only foot, the left. Two crutches which the poor cripple had used were broken, being found one within and one without the low walls of the ‘tie-camp.’ . . .Two bloody knives, one a long bladed stiletto and the other a large keen-bladed pocket knife, were found lying where dropped by the murderers when they had finished their bloody deed. . . .

The supposition is that two or more men committed the foul deed. . . . It was believed that the men were on a west bound freight train which left Montello the morning of the murder.

We hurry along now to Elko, Saturday afternoon, March 27, and the dark oak-and-gleaming-brass interior of the Elko County Court House on Idaho Street.

From the Free Press:

After a long and tedious trial covering a period of ten days, during which the counsel for the defense exhausted every effort to save them from the hangman’s noose, the case went to the jury Saturday afternoon at 4:30 o’clock and after deliberation lasting about two hours a vote was taken. It required but one vote to reach a verdict, and that verdict was murder in the first degree. . . .

When the prisoners heard their fate they broke down for the first time. The air of nonchalance and indifference which had characterized them throughout the trial disappeared and they seemed to fully realize their position. Neither is now inclined to talk of the affair and Ibapah has done little but sit and cry since he learned of the verdict. Johnnie is less demonstrative. . . .

Now that the men have been fairly tried and convicted, justice should be satisfied at an early date and at as small a cost to the county and state as possible. The spirit of the poor crippled stranger should not be caused to cry out long for vengeance.

Johnnie and Ibapah, the Indians who killed a white stranger at Montello, Elko County, last winter, passed through Reno to enter the death cell at Carson. They will be hanged together on December 7th. The young fellows were securely manacled and heavily guarded, but they made no effort to get away. With the peculiar stoicism of their race they are resigned to their fate.

“We’ll hang next month,” said Ibapah stolidly. “Yes, we killed the fellow alright. I cut his throat and Johnny held him down.”

Ibapah says the ghost of a man who was hung at the prison this year came to his cell in the night and talked to him. He talks seriously about the ghost, which was that of a white man, he says.

Ibapah is a boyish-looking Indian of the Goshute Tribe. He is a half-breed and is about 17 or 18 years old. Johnny is a bulky little Shoshone, about five or six years older. . . .

The Board of Pardons refused the bucks clemency, although Johhny’s old parents journeyed all the way to Carson to implore mercy from Governor Sparks.

From the Nevada Appeal:

The law has been vindicated on two of the most atrocious murderers that ever went to the scaffold, and those that saw the execution will always believe that the law in this case failed in its purpose. Both victims were ignorant and half savage degenerates that are better out of the world, but neither of them seemed to realize the purpose of the execution. . . .

Johnnie, the larger of the two, and an evil looking brute, laughed and talked with the the guards and ministers around him for a moment and then broke out in curses as he stalked around the guard room, the central figure for once in his life of a circle of white men. . . .

For once in his life, just as he was about to leave it, Johnnie, Indian, outcast, low fellow, got everything he wanted. Fat and disdainful, he enjoyed his brief hour of triumph to the last sweet second.

Ibapah, on the other side of the room, talked little and walked often to the door where he peered through the iron bars for the last few moments left to him. . . .

The condemned men were led to the traps, Johnnie on the right, and without a word from any person the hangman affixed the noose to each and put the black cap in place. He turned after this to the warden, who nodded his head when all was ready. The hangman took one more quick glance to see that all was prepared, and raised his hand. 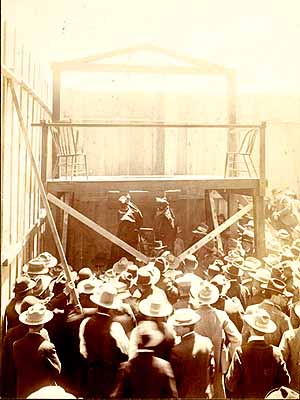 The two traps dropped with a terrific crash. . . .

They were the first Indians executed in this state by due process of law.

We’re back now, in the present tense. Unbuckle from the microfilm reader and replant both feet on the terra firma of 1994. Exit time travel. Please watch your step.

Postscript — As Governor in the 1970s, Mike O’Callaghan kept the photograph of the family of Indian Johnny meeting with Governor John Sparks on the leather-covered table. They were asking for clemency, which John Sparks did not grant. The framed photo was on the table when Gov. Mike first entered the room after outgoing Governor Paul Laxalt had vacated it. In the photo, the table on which the photo is kept is clearly the one at which the people are sitting. I was Gov. Mike’s Press Secretary and Administrative Assistant for Natural Resources. Governor Mike commented to me one time that it kept him reminded that men before him, and the governors who follow him, will face tough decisions in that room, even life-and-death decisions. — Robert E. (Bob) Stewart