A site of a major redevelopment project doesn’t sound like a great place to go for a bite to eat.  But at Edgewood golf course at the Stateline of Nevada you can find such a place and see part of the future of the South Shore being built. 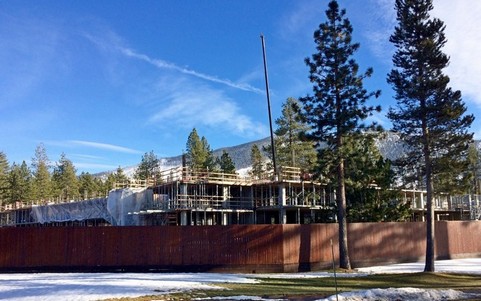 Edgewood Resort Project is full steam ahead.  Owned by Edgewood Companies, formerly Park Cattle Company, landowners at Lake Tahoe since 1896. They own 500 acres in Nevada.  Breaking ground in the spring of 2015, the progress they have made so far is impressive.  The site is swarming with workers, all of whom seem very happy to be working their trade in the winter months. Whistling and singing can be heard all through the site, while cranes move steel beams high above and concrete booms fill the foundations below.

The main focus of all the work is on the soon to be Edgewood Lodge, which will feature 154 rooms, restaurant, lakefront pool and terrace, 6,000 square foot conference center, and 8,000 square foot spa, among other things.  Next phase will include the construction of 40 cabins along the 8th and 9th fairways, located right next to the lake. 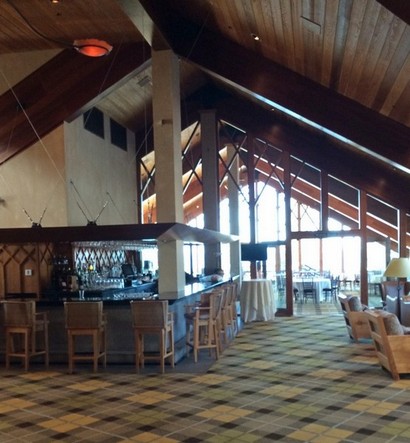 While the construction zooms along, directly across from the project is the clubhouse where Brook’s Bar and Deck is located.  A locals’ favorite, it’s open for lunch and dinner at 11:30 – 8:30pm Wed-Sun.  In the summertime it’s a bustling place while the golf course is open.  But in the winter it’s often overlooked.  It is one of only two places on the South Shore’s Nevada side that offers lakefront dining, the other being Zephyr Cove Restaurant. Brook’s, located right off the 18th hole, is very spacious inside and out, with an expansive outdoor patio and fire pit.  The views of the golf course are impressive looking up the fairway of the first hole, with the Carson range and Daggett pass in the background.

The environment inside Brook’s is a sort of sports bar inside a log cabin a very classy log cabin.  The menu offers a variety craft beers and specialty drinks like their Mojito, made with fresh mint grown in the garden on the premises.  The food menu has an array of appetizers, from chicken wings to veggie wraps.  Most of the food is that of a bar food flare, but with certain little twists, like the Salmon fish and chips and a very good cheese and chicken Panini served with sweet potato fries. 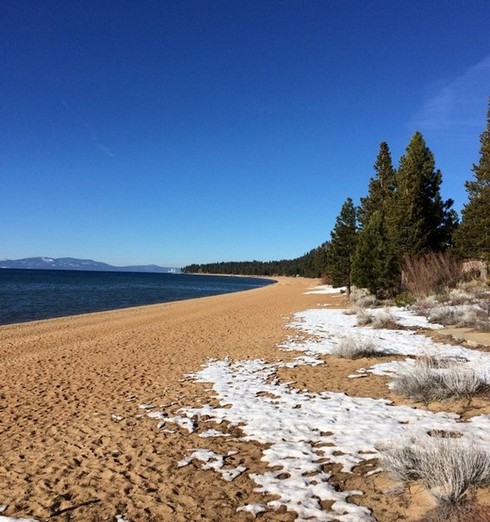 With Brook’s proximity to the lake you can step outside and be on one the South shore’s largest and longest spans of beach.  If you feel like working off your meal with a walk on the sand, you may end up at Nevada Beach, a good mile and half North of Edgewood.  But if you don’t want to go for a stroll just take in the splendor of Lake Tahoe, with Mount Tallac directly across from you rising to nearly 10,000 feet.

Music Mondays at Zephyr Cove Restaurant, starting February 1 at 4pm and running every Monday through the month. I’m interested in seeing how this goes. The venue is located in the historical Zephyr Cove lodge, always a fun daytime destination, but adding a night attraction could be cool.

Tuesday Night Blues Night at Harrah’s Lake Tahoe.  A free Blues show live at Center Stage in the casino.  Headlined by Buddy Emmer, a longtime Northern Nevada musician and his band, The Buddy Emmer Blues Band.  Every week will feature different Blues artist sitting-in with the band everyone from up and coming talent to legends.  It’s definitely a good time, with plenty of seating and a dancing area for those who want to boogie down.  The January 26 show featured a young talent from Santa Cruz named Jake Nielson, who could shred his Fender Stratocaster with the best of them. Ripping through Cold Shot by Stevie Ray Vaughan was a highlight.   Shows start at 8pm every Tuesday.

MontBleu Casino Resort and Spa to watch the big game.  If you can’t make it to Santa Clara to watch the Super Big Game, why not visit Lake Tahoe and watch Denver and Carolina butt heads with a couple hundred other football fans.  MontBleu  is offering a party inside their Blu Nightclub, and for $30 you get a food buffet and a couple drinks to watch it on many big screen televisions.  Maybe make a wager. It adds a little excitement to have some cash riding on the game.  The game is February 7, doors open at 2:30p.m.