There are many roads to South Lake Tahoe, but during a stretch in February major highways into America’s year round playground were closed, and travelers had to take the scenic route to reach their destination.  The record snowfall the area received in January was followed by a drenching of rain that was too much for some of the hillsides on a few thoroughfares. Tahoe was in some ways isolated while highway crews worked around the clock to get the roads open.  It may have taken a little bit longer to get up here, but people were still rewarded with the same incredible destination.

Most might think there are no benefits to taking the long way, but when the skies clear up and the storms go away some of the smaller state highways can offer some great drives — such as Hwy 88 in California from Placerville to Lake Tahoe.  Highway 50 over Echo Summit was closed to people heading up the hill from Sacramento due to multiple mudslides near Pollock Pines and in the Kyburz area.  In order to reach the area drivers were diverted to Hwy 49 to Jackson, where they picked up 88 or picked up the Iron Mountain Road via Diamond Springs.  Either way offers a scenic tour through the Sierra foothills and gold country that people tend to forget while zooming up the hill to get to Tahoe, and going this way doesn’t really take that much longer than Hwy 50.

If you are a savvy planner and like deep snow to ski in, then you can hit up Kirkwood Ski Resort on the way up to the Lake off of Hwy 88.  Kirkwood offers the deepest snow in the region, and usually on the West Coast.  Its advanced terrain is ideal for powder lovers, and if one leaves Sacramento early enough one can spend the day skiing and still have plenty of daylight left to make the rest of the journey to the hotel or cottage up at the Lake.

Highway 50 is having a rough winter on the Nevada side, too, where a bunch of vehicle-size boulders popped loose and crashed onto the road at Logan Creek, between Cave Rock and Glenbrook.  The rocks were so big it required blasting them in half to remove them.  Then when things seemed over, engineers found another giant that was loose higher up that not only threatened the road but also a house below on the lake shore. The closure of this road was disruptive to travelers and commuters going and coming from Reno and Carson City.  People had two options: either go 395 south through Gardnerville and over State Route 207 (Kingsbury Grade), or go the ultimate Lake Tahoe scenic route around the whole lake by taking Hwy 28 at the top of Spooner Summit to Hwy 89 through Tahoe City and around Emerald Bay. 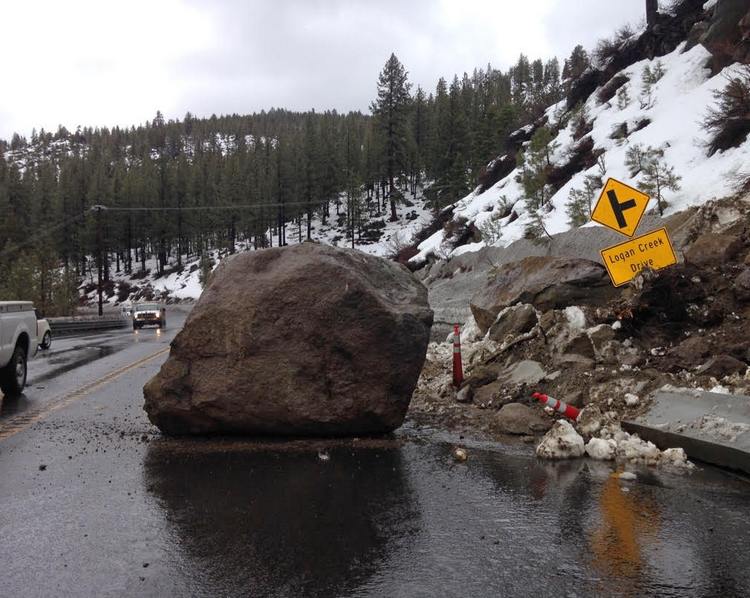 It may not sound like an ideal thing to go for a leisurely drive in the winter months, but when the sun is out and no storms are expected the roads are clear. And like many winter days when the skies are clear, the lake is so stunningly flat it looks like you can walk across it. Emerald Bay is one of the most photographed places in the world, and for good reason: it’s beautiful, and with a snowy backdrop it’s breathtaking. Road crews have done a great job of clearing the turnouts and SnoParks around Emerald Bay, where people can park and enjoy the scenery. Or, if you brought along snowshoes or cross country skiis, get out and go for a wintry stroll into the mountains above the lake of the sky.

The future of Stateline at the South Shore lies with the US 50 South Shore Community Revitalization Project.  The project has been in the making since 1980 and has made great strides with the construction of the Heavenly Village, the Gondola, and the Village and Raley’s shopping center.  With all the new attractions to such a small area of town, which many consider to be downtown, the area has become congested, and a proposed rerouting of Hwy 50 has become almost a necessity.  50 would be rerouted around the casino corridor on the mountainside behind Mont Bleu, Harrah’s and the Heavenly Village and back to the existing highway at Pioneer Trail, approximately one mile long.  Meanwhile, within the corridor and village area it would become more pedestrian friendly, with the road being narrowed and sidewalks widened.  A central location for people visiting and locals has long been needed in this town to gather and enjoy themselves, and the Stateline area is an ideal place for development that can only benefit this bi-state community.

The ends justify the means, and with all the damage and disruption the snow and rain has brought to the interstate highway system, it will all be gravy in the summer.  There has been so much water flowing into the lake, I think you can watch it rise right before your eyes.  Estimates have been in the trillions of gallons over the last two months.  Piers on the South Shore and by Cave Rock that were sitting on dry sand in the fall are now in three or four feet of water.  It’s always better when the lake is at capacity — it just makes you feel good.