There really were gunfighters in Pahrump

Pahrump doesn’t have the fame of Tombstone, Arizona, where gunfighters blazed it out on its streets in a hail of bullets. And yet the town has a performing group of resident gunfighters complete with a Wild West Extravaganza weekend  in the spring. Known as The Pahrump  Gunfighters, the group performs at the Extravaganza, and they do shows throughout the year. The founder of the organization, Dan Delgado, is dedicated to the history of the West.

The historical records say there were a few gunfights in Nye County, which Pahrump is a part of. A Nye County Sheriff, Thomas Logan, did die in a hail of bullets in Manhattan, Nevada in 1906 at a saloon, but really, there are few records if any  that  clearly depict any gunfights near Pahrump. So the group of cowboy gunfighters in Pahrump does get flack for even having a gunfighter show. The people that criticize the group  argue that Pahrump wasn’t even a town back in the days of the Old West, and they are right.

The Earp brothers and Butch Cassidy

The valley was a small ranching community, and there was no town. During the Old West era, it was basically inhabited  first by Paiutes, who stayed on even as the first ranchers came in the late 1800s. But Dan sticks to his guns, and doesn’t entirely agree that there were no gunfighters that came through the area. He will be the first to tell you there were quite a few famous gunfighters that came through the Pahrump Valley. He said there were many cowboys and prospectors in the area, and all carried guns. One of the most famous was  Butch Cassidy. Dan believes that he may even have died near Pahrump.

“The Earp brothers, (of Wyatt Earp fame) who settled in Goldfield about 200 miles to the north, and maybe even Pancho Villa, a famous revolutionary from Mexico came through this area,” Dan said. He wasn’t specific on the times, but he was sure on Pancho.

Who knows better on the history of the town than the local Museum? It’s great place to visit just to get an idea of the origins of the town and to ask about gunfighters and cowboys. The Pahrump Museum is at 401 E Basin Ave. Pahrump Museum director, Marilyn Davis, agreed with Dan on the cowboys. “The Pahrump ranches were quite large,” Davis said. “Cowboys were around  Pahrump as early as the 1870s.” And of course, Dan was right on the prospectors. “There were also prospectors who were looking for gold, and they settled around a number of mines around Pahrump — the most famous being the Johnnie Mine,” Marilyn remarked.

There was a town near Pahrump with quite a large population. Johnnie is no longer a town, today, but the mine is still there. It is 8.5 miles north of present day Pahrump. “The town of Johnnie had a brothel, a saloon, a hotel,  and about 2,000 people there,” she said. “They pulled a lot of gold out of there and there are a lot of little mines all around it.”

And the gunfights? Were there a lot of them there in Johnnie?

Both Marilyn and Dan don’t really know the answer to that. Both believed there were fights because of the mining. Miners fight, and that’s a given. “Historians believe only one death occurred up there,” she said. “There may have been gun fights, but there are no records. There are a couple of graves up there, though. The museum was given the mine, but not much is up there today. Only one building remains, and we don’t give tours. for safety reasons.” Marilyn wants to search for an old graveyard up there for clues to the town’s past.  She also had no clue on Pancho Villa. “I can’t verify Villa, but I’m pretty sure Butch Cassidy died there,” Marilyn said. “There had to be an older cemetery up there. I am going to find his grave.” What is known is that Villa crossed the border many times and made a raid on New Mexico town in 1916. She said there are quite a few eyewitness accounts on Cassidy being there and dying in a mining accident there. 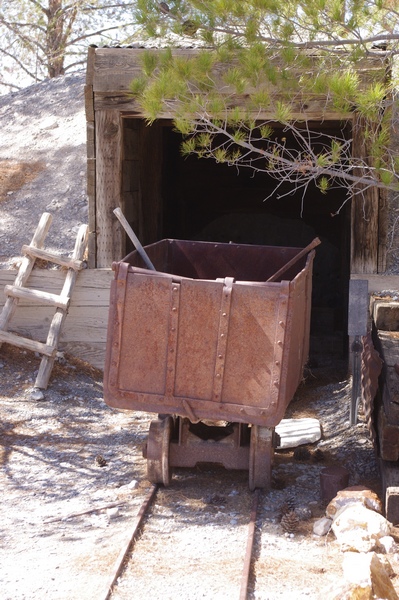 Museum Curator and historian for the Clark County Museum, Mark Hall-Patton, said he is pretty sure Cassidy isn’t buried in Johnnie. “Cassidy came from a Mormon family, and so he has a lot of relatives still around, all making claims that are probably not true. Also, bad guys want money, and before the 20th century there wasn’t much out there to rob,” Mark said. “There’s not much return on a  jackrabbit. I am pretty sure Villa and Cassidy never went through Pahrump. There was a guy named Jack Longstreet. They named the Longstreet Casino after him in Amargosa Valley. He would be the closest guy to a bad guy.”

One thing is certain, and that is the modern Pahrump Gunfighters have been around for awhile and are here to stay and entertain us, regardless of what the history books say.

“I have  been with the Pahrump Gunfighters since its start in 2002. At first there was the Pahrump Valley Gunfighters, and then there was the Drifters,” Dan said.  “I always wanted to be a cowboy growing up.  I grew up wanting to be a cowboy in California, and when I got older I was a stand-in in Western movies. We are a performing group and we are available to perform. We just require a donation to help pay for the blanks. These can be expensive, at nearly $12 a box.”

Despite its longevity, not very many tourists who love the Old West know they exist. At the moment, this performance group performs at several locations in town. One place is the Stagestop Casino, which is located at 100 West Stagecoach Road. The show is constantly evolving as more tourists demand a glimpse into the past. Shawn Holmes, the owner of the Stagestop, said he would love to develop the show even more and offer it to even more tour groups. “Right now, the show is open to anyone who is interested. We currently offer a dinner show to a German biking group that rides through Pahrump during the summers. We do have  a restaurant on site, and people are welcome to eat and then see the show. I think it would be a good idea to offer it to other groups in the future.” For more info on the shows call:775-727-7300

These gunslingers also perform at the Pahrump Fall Festival during the third week of September, and again in the spring at the Wild West Extravaganza at Petrack Park in May. The group can be reached at 775-751-3458.

As for the museum, they also celebrate the Old West, and even have  some of the area’s original buildings out back, like an old one-room schoolhouse, an old general store and some old mining shacks, to name a few.  The museum will have a new train exhibit and brothel exhibit soon. The Pahrump museum maybe called for more info at  775-751-1970.