The town of Pahrump just added one more attraction to its fall lineup to make this town the place to be.

It certainly will be ranked as one of the best rural town car shows in Southern Nevada, and maybe the state, as 138 cars from all over the region came to the Pahrump Top Notch car show  on Oct. 7. The show  was  held at the Top Notch facility at 3681 W. Bell Vista Road in Pahrump.

The show was a huge success, and according to show organizers it  will be back next year.  The car show promoter Tex Whitson, former manager of Merle Haggard, said Top Notch owner, Marcel Martel, has wanted to do this for a long time.

“He owns around sixty MOPAR cars and considers them to be an investment,”  Tex  said.  “I  told him one day that having a car show would be a great opportunity for him to show them off, and he agreed.”

Martel brought in twenty cars from his personal collection that were not judged. 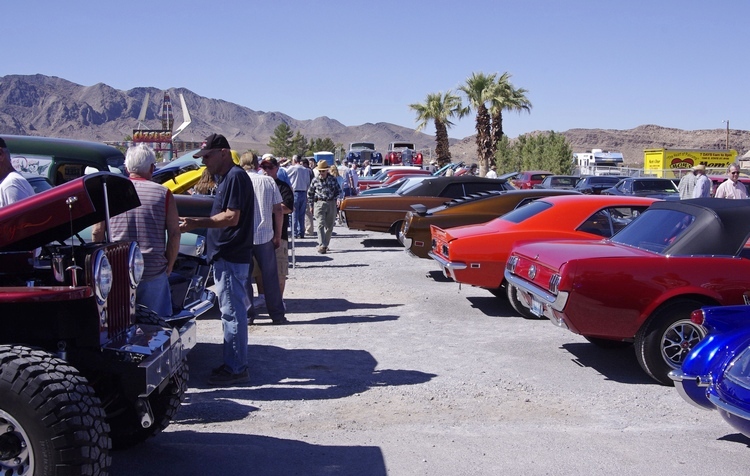 What makes this car show worth visiting and even participating in?

Tex said one of the things that Marcel wanted to do was to bring a car show to Pahrump that was different from all the other shows. The one thing that concerned him most about local shows in town was the fairness of the judging.

“If you have gone to shows here in town you would have noticed that there was a slight bias,” Tex said. “All the judges were either from one car club and were local to Pahrump. They knew everyone in the show and often picked their friends car. Martel wants to eliminate that.”

Tex said that at the Top Notch show all  the judges were from out of town, so you had no hometown bias. Martell chose judges from California and Arizona.

Tex said another problem with the small car shows around town was the prizes. “Martel  knew that to get people from out of town that he would have to offer something better than just gift cards,” Tex explained. “So in addition to some great trophies, he put up cash.” Martel  gave out $3,000 in cash prizes to the participants. There were also a lot of raffle prizes for everyone who chose to buy tickets.

To make it even more attractive,

Martel gave the proceeds to a worthy cause.  All the proceeds of this show was all donated to the Nye County School District for needy children. The organizers ended up donating about $2,600.

Still  not convinced it’s your thing?

One of the reasons people liked the show was because it provided things for the kids to do there.

“It is much bigger than expected, there are a lot of cars out here,” Pahrump resident Nye County School District, a participant in the show, said. “I guess this is the first one, and it’s pretty good. I was impressed with it. There is a lot more to do here. There are rides and vendors. There was a lot of planning put into this, you can tell.”

People attending also liked the fact that Mom’s Diner provided some good eats and that the Hubb Bar and Grill  provided some drink as well.

To top it all off, there were good tunes to listen to as you browsed through all the classy old cars, for the Reeves Brothers, a local country band, was  there to entertain.

The bottom line is people are ready to come back next year. Clark Hendrickson, another Pahrump local and participant said it was definitely something worth doing again.

“I think it was the best car show that I have seen in Pahrump, yet,” Clark said. “The one in the park used to be good. It had music too, but this is a good show. Lots of people came out from Las Vegas. I would do this again.”