As winter gives way to spring, the state shakes off the last of its snow with a spate of Memorial Day celebrations. The most unusual of them takes place in Tuscarora in odd years, and that’s where we headed after meeting a group of friends in Elko.

Tuscarora is a mere flyspeck on the Nevada map, about 50 miles north of Elko, all of it but the last few miles paved. It was a placer camp for the first few years, named for a Civil War gunboat on which one of its discoverers had served. In 1871 outcropping silver veins were discovered on Mount Blitzen and by 1878 Tuscarora’s silver mines made it one of the most productive mining centers in the state. Because its development coincided with the completion of the Central Pacific Railroad, Tuscarora boasted one of the biggest Chinatowns outside San Francisco until the mines gave out and the mills shut down in the 1890s.
Over most of the century since then Tuscarora survived — insofar as it did survive — as a center for the ranches in the

surrounding valleys. The population dwindled from its peak of perhaps 3,000 to a few dozen, slowly losing its commercial elements until there was nothing left but the Post Office. By the time Dennis Parks brought his wife and two sons to their new home in Tuscarora in 1972, the old city was down to barely two dozen residents. By the time he had made an international reputation and built the Tuscarora Pottery Studio into a world-renowned school there were a dozen other artists creating eagerly-collected art in the old town.

A few years ago they decided to invite friends, family, fans

they’ve been doing it every other year since. Why not more often?

With the number of prolific artists and the ever-increasing opportunities to promote the event, why not do it

Because they are in Tuscarora for a reason. These are shy desert creatures, not media-mad Andy Warhols. “We’re basically hermits,” painter Sidne Teske told me. “It takes us a year to recover from the weekend, and then another year to organize and prepare for the next one.”

Several hundred visitors thronged the dusty streets of the old town, enjoyed the visual feast (and the one involving hamburgers) and bought the occasional work of art. It was very gratifying to see how well Tuscarora has survived the closing of its mines and the long years of isolation, and how beautifully it has been re-energized by its new generation of residents. Maybe the most important thing on exhibit was the resilience and strength of the human spirit and the unique opportunities for its expression that Nevada provides.

It rained briefly on Saturday and the wind asserted itself for a while on Sunday, so there was excitement on every level. Another highlight of the weekend: cemetery tours offered by Jan Petersen, a native of Elko and enthusiastic researcher into the Nevada experience. She has identified the earliest grave as that of Janet Snider, a 17-year-old woman who died in childbirth in 1875 and was laid to rest with her baby.

Since then several dozens of people have ended their trails here, including four generations of Phillips and Williams, Cornish miners and summer artists. The most recent arrival is Troy Van Norman, the fourth generation of his family in the valley whose great-grandfather is also buried here. Another relative, accidentally electrocuted in 1902, lies in

So mark your calendar (and save up some money in your art budget) for Memorial Day weekend 2011. You can enjoy a visit to Tuscarora any time, and I recommend it, but the Open Studios experience is a must.

We also made a visit to the California Trail Interpretive Center, about ten miles west of

Elko at the Hunter offramp from I-80. It’s an eye-catching building on the north side of the freeway, and even though it won’t open officially until the summer of 2010, it is being used for occasional special events in the meantime. The structure itself and its approaches have been completed, and work is ongoing to install the exhibits inside. There are only two in place so far, but if the rest are as powerful as these, the Center will be a major attraction.

If you want to annoy Joe Conforte, describe him as a fugitive. Joe lives in Rio de Janeiro now, but as he will tell

you if you give him a chance, he is not a fugitive. “A fugitive is someone who has been charged with a crime, or convicted of a crime, or put in custody for a crime, and then runs away. That’s not what I did. When I came to Brazil I had not been indicted, convicted or put in jail, so I cannot be a fugitive. I just moved!”
After he moved he was indicted, but he holds a hole card: Brazilian law prohibits the extradition of anyone with a dependent who is a Brazilian citizen, and Joe has a Brazilian dependent. So as long as he remains in Brazil, where at age 83 he is living a life of comfort and leisure, he is protected from interference.

And don’t call him a pimp either. “I was never a pimp,” he will explain with a touch of testiness. “A pimp is a guy who forces a girl to work for him, and takes the money for himself. I never forced a girl to have sex with a customer. That would be a crime! I was a businessman! I provided a safe, friendly place where a man who wanted sex could find a girl who wanted to sell it to him. There’s no place for a pimp in that. A girl on the street cannot survive unless they have pimps. Where at Mustang if a girl wanted it, okay, that was her business, she could have one. But she didn’t need it. She didn’t have to have one. In fact, I helped girls get away from their pimps.”
Joe has been in Rio De Janeiro since 1992, living in a luxurious penthouse apartment overlooking the beach at Ipanema. “This is paradise!” he told me recently. “Paradise! If you don’t have to work, I mean.”

Quick notes from beyond the mountains: Earlier this spring a Goldfield couple was enjoying an afternoon refreshment in the shade behind their home when Bryn and Mattie Payson, tourists from England stopped and introduced themselves. They were on vacation in the USA, visiting ghost towns around the west in search of inspiration for the western town they are helping to build in Laredo.

“In the UK,” they explained, “there are many people like us who are dedicated to researching and portraying the characters from the American West as it really was during the period from 1840 to 1890. We promote a high standard of historical accuracy as Western re-enactors.”

The Goldfielders were so taken with their dedication and enthusiasm for the American West that they are returning the favor by dressing and acting as Englishmen. They clap derby hats on their heads and tuck brollies under their arms for the stroll to the Queen’s Arms pub (aka the Northern Saloon) where they practice their English in accents ranging from Cockney to the plummy tones of the BBC: “I say old chap, will you join me in a pint of bitter?” “Oh, Jolly good show!” “Pip pip.” Plans are underway to convert the great stone hulk of the old high school into a medieval cathedral . . . It’s too bad our English visitors couldn’t stay until June 12-14 for the Carson City Rendezvous. With continuous live action gunfights, tomahawk and knife throwing, stagecoach rides, Dutch Oven cook off, Union and Confederate soldier encampments, Pony Express Reenactment, Vaudeville-style western comedy acts, and Native American dancers (most events free to the public), the Rendezvous fills the 51 acres at Mills Park with more than 80 booths and a variety of activities . . .

And by the way, Carson City has a great collection of coupons on their website offering some great discounts: from 50% off to 2-for-1 on dining out; $25 and 2-for-1 green fees for

golf; $25 in free slot play and generous discounts for lodging . . . We had to cancel our visit to the Amargosa Opera House in early May because Marta Becket was ill. We are relieved by the news that Marta is now doing fine. She had the flu bug, but other than that she is well and looking forward to next season, which begins the 2nd week in November. On Saturday June 13 McAvoy Layne portrays Mark Twain at the National Auto Museum in downtown Reno. Twain famously seceded from the secession and took a stagecoach to Nevada rather than participate in the Civil War, but in 1898 he heard again the call to arms, faint and faraway, remarking afterward: “I could have been a Rough Rider, if we had gone to war in automobiles.” . . . Men’s Journal Magazine has ranked Reno’s Old Southwest neighborhood as one of ‘The Best Neighborhoods in America’ in the June 2009 issue . . . British Airways will begin daily, non-stop service from London Heathrow Airport to Las Vegas this fall . . . Here is a whole slew of money-saving Las Vegas coupons . . .

gun demonstrations, a magnificent Sesquicentennial Parade and the ‘Voices of the Past’ at the Silver Terrace Cemetery . . . Dann Lewis, lately of Maine, has been selected as the new Director of the Nevada Commission on Tourism. . . Tickets for the 2009 season of the Lake Tahoe Shakespeare Festival (July 11 through August 23) are now available onlineor by calling 800-74-SHOWS (800-747-4697). Prices start at $22 for open seating tiers and range in options up to the premium seating section at $72 . . . The Red Dog Saloon in Virginia City is being primped and polished for a June 19th & 20th Grand Opening on the 24th anniversary of The Charlatans’ first appearance there to begin the musical era of sex, drugs and rock ‘n’ roll. The band this time: Big Brother and the Holding Company!

Overheard at the Tuscarora cemetery: “If God didn’t want us to eat animals, why did He make them out of meat?” 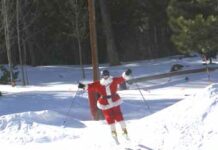 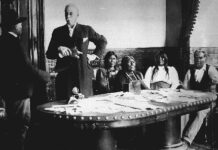 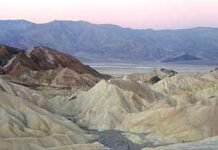 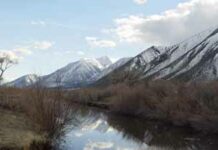 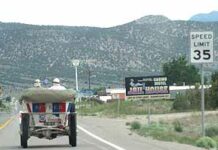