Someone once described being in Paris as being an ant crawling across a magnificent work of art. Death Valley is like that too, except that you drive, and early in November Robin and I devoted two days to the experience.

We came in from the north and turned west off US 95 at Scotty’s Junction, and drove the 23 miles to Grapevine Canyon and Scotty’s Castle. What a fabulous place it is, and what a fabulous story behind it. Death Valley Scotty and the wealthy Chicago insurance magnate who bankrolled his action were a curious pair, but they complemented each other in the way that disparate souls sometimes do.

The homespun Scotty brought the urbane Johnson to Death Valley with his wild tales of a hidden gold mine, and Johnson built this beautifully designed and constructed home as a setting for the life they shared with their wives and with each other. That’s the wonder of this place: it’s not just a “castle” it’s a beautiful and beguiling piece of architecture, a combination of art and engineering that cheers the heart and soothes the mind.

This exceptional treasure — I could describe it, but the experience of your visit will soar above any description — has been preserved and maintained as a part of Death Valley National Park; tours are given by accomplished guides who make the visit informative and memorable. Highly recommended life experience.

We stayed at the Furnace Creek Ranch, a large campus like a small college or an upscale military base — it’s quite comfortable and surprisingly inexpensive — and the next morning we went to Zabriskie Point to watch the sun come up.

“Excuse me!” called a man whose large expensive camera was aimed at their backs,

“You’re standing in our way!” No response. “Excuse me! We’ve been waiting here

an hour to take photographs and

you’re spoiling our pictures!” The interlopers looked back at us and replied, “There’s nothing that says we can’t be here. You should come down here too, there’s plenty of room and it’s a better photo.”

“I drove for two days to get here for this sunrise,” replied one of the photographers above. “You’re ruining my photo!” The downhill couple did not respond, and the photographer, fuming with anger and frustration, strode down to confront them. Those of us above watched with interest and exchanged commentary in a variety of accents, French, German and unidentifiable as well as home-grown American, almost unanimously annoyed at the lack of consideration displayed below.

The envoy returned, having failed to budge the pair below, and the grumbling above became more voluble. One man actually threw a small dirt clod at them, but it fell far short. One of the waiting crowd spoke up, “Don’t include me in your complaints,” he said. “If you want them to move, go down and talk to them.”

As the sun seemed about to explode out of the eastern crags, the envoy again hurried downhill to remonstrate with the offenders, and when he hurried back up again he announced that they had agreed to move temporarily to allow the uphill photographers a few minutes for unobstructed photos.

They moved, and shutters clattered as the sun rose and the shadows to the west shrank back behind the brilliant hills. Mayhem was averted, but the hard feelings remained, and everyone went away angry and upset from what had been anticipated as a transcendent experience.

In the heat of the day we took the Salt Creek hike in the valley floor, and I’m sorry to report that as the hours wore on and the sun was beating down, Robin left me to die along the trail. Her natural gait is a determined stride, mine a meandering stroll. A desert tragedy was narrowly averted by the fact that the trail is actually a carefully constructed boardwalk in a loop only half a mile long. Otherwise I’d have surely perished (except for Shorty the Wonder Dog and possibly for the many other visitors).

We visited several other of the spectacular landmarks in the Park, including the brilliant Artist’s Palette and Mosaic Canyon, a beguiling hike behind Stovepipe Wells, and found ourselves at the elegant Furnace Creek Inn, about a mile south of the Ranch, at sundown. You can drive up to the front entrance, but it’s more fun to park at the foot of the drive and enter by way of the loooong tunnel that delivers you to the elevator. Up you go from there, into the enchantingly designed and appointed hotel with its urbane bar and dining room. We had cocktails — clink! — as the sun set behind the Panamint range, far, far removed from the antagonism and ill will of sunrise.

It was my pleasure and privilege to address a breakfast meeting of the 49ers Death Valley Encampment at Stovepipe Wells, and I talked for a while about Panamint City, in which Nevada Senators Jones and Stewart were major investors (and losers), and about the subject of my current preoccupation, Joe Conforte.

Both topics seemed to be of interest, with Joe generating perhaps a shade more curiosity. The autobiography is in the final stages of preparation now, and scheduled for publication in the spring. Joe is one of 20th century Nevada’s most colorful characters, and he tells the story of his adventurous life with verve. It’s a story that might have been written by Horatio Alger on acid, the tale of a poor immigrant boy seeking his fortune in America. He succeeded of course, by creating the famous Mustang Ranch brothel outside of Reno, and in the process became a hero to everyone who ever dreamed of grabbing the gold ring and getting away clean. Basically he did it by sheer force of personality and the determination to never, never, never, NEVER give up.

The biggest honor of the event, though, was that I was followed on the agenda by Sourdough Slim. I’ve been a fan since I first saw him some years ago at a tourism conference and watched in dismay as he struggled to remove his hat after he’d tugged it down too tight on his head. Most recently we watched him from the balcony at the Eureka Opera House. Slim is part harmony and part hilarity, part Gene Autry and part W.C. Fields, and I was honored to be on the same bill.

Slim makes regular appearances around Nevada, and you can get in on the fun at any or all of them. He’ll be performing at Denys Koyle’s Old Sheepherders Party, a unique event in its own right, Friday and Saturday January 15 and 16, 2010 at the Border Inn on US 50 in Baker, right on the Utah line. On March 5 and 6 he’ll be at the Martin Hotel in Winnemucca with Robert Armstrong, a part of the Great Basin Concert Series, and he’ll be back in Eureka April 16 for another performance at the Opera House. If you’re looking for a reason to get out and see some sagebrush, Slim’s a good one.

We drove west out of Stovepipe Wells over the north end of the Panamints and then over the Inyo Range into Owens Valley where we picked up US 395 for the drive home along the eastern foot of the Sierra, resplendent in fall colors, back home.

We had passed through Tonopah on our way to Death Valley and like Jim Butler we made a discovery. Whitney’s Bookshelf is an unexpected treasure in Tonopah, which hasn’t had a bookstore in nearly 30 years. This one has an inventory of thousands of used books, priced at $1 for a paperback and $2.50 for a hardback, and Robin and I carried two heavy bags of them to the car.

I asked proprietor Larry Whitney what had prompted him to open a bookstore in Tonopah, and he surprised me with his answer. “I was retired,” he said, “and looking for a place to settle. I wanted a place with no bookstore within 100 miles, no taxation of my retirement income, low cost of living, lots of DUI arrests and no AA meetings.”

He pointed to a room at the back of the store. “We hold 15 AA meetings a week here now, we hold Alanon meetings and we’ll be starting NA meetings here soon too.”

In addition to the shelves upon shelves of books in the store, Larry also sells his books online; you can search his inventory here. He likes living in Tonopah, and clearly he has made the old town a better place.

Quick notes from beyond the mountains: Tahoe Ridge winery has outgrown its Genoa tasting room and relocated to Minden across from the Carson Valley Inn. In the process it has become a tastefully appointed bistro . . . Here’s a fine article about a great made-in-Nevada movie, written by Phil Earl for the Humboldt Historian . . . The V & T Railroad is offering Holiday Train rides Thanksgiving weekend and the first three Saturdays in December. You can make the Virginia City – Carson City excursion or the shorter Virginia City – Gold Hill run . . .

Mesquite has a lively new website detailing its many attractions and accommodations . . . Restoration of the old Schroeder Dam at Beaver Dam State Park is complete, and as a result, the main access road into the park has been re-opened, subject to weather . . . 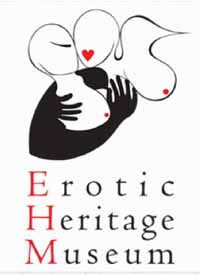 Here’s an interesting little time-waster that might actually teach you something: a faux slot machine in a Las Vegas Sun article about gambling addiction . . . 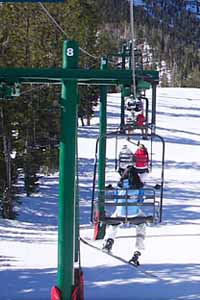 At the Las Vegas Ski & Snowboard Resort snowmaking staff has been working double time to get more terrain open on Mt. Charleston, and now the beginner slope, Rabbit Peak, and an intermediate run, The Strip, are open 7 days a week, 9 am to 4 pm. For a limited time you can also take a scenic ride on Chair 1, a great opportunity to see the mountain even if you don’t ski . . . 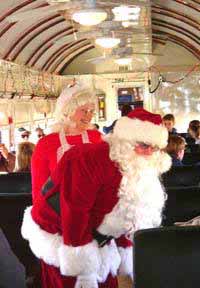 The Clark County Museum on Boulder Highway in Henderson has a new attraction on Heritage Street. The Candlelight Wedding Chapel, originally called the Little Church of the West Algiers, then All Religions Wedding Chapel, it was the site of innumerable weddings (including those of Bette Midler, Michael Caine and Whoopi Goldberg) before it was moved to make room for the new Fontainebleau, now in bankruptcy, in 2007 . . .

Advance ticket sales have been so brisk that a scheduled 4 pm departure has been added each day. 100 tickets will be available on the day of each Santa Train departure; the ticket booth opens at 9 am. Last year the line started forming before 8, so the best way to get day-of-departure tickets is to have someone come early to buy them. Seating on the train is first-come first-choice, and the boarding line starts forming about a half-hour (or more) before departure. The last seats available are in the open-air car, so dress warmly just in case. The Toy Train Operators Society will have model train layouts in the maintenance building across the street from the station; visit their displays even if you don’t ride the train. The museum will close for maintenance during January, and resume normal operations the first weekend in February . . . 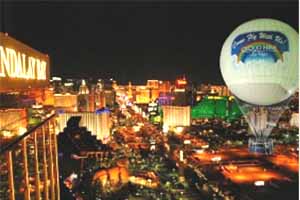 There’s a new way of getting high in Las Vegas: the Cloud Nine balloon, across from Mandalay Bay Resort & Casino, is 7 stories wide and 11 high, the largest helium-filled, land-tethered balloon in the world. As many as 30 passengers at a time are carried aloft in a customized gondola offering a 360-degree view of the Las Vegas Valley from nearly 500 feet in the air. It is also illuminated from within, making it visible from Henderson and Jean and mystifying the coyotes in the Spring Mountains.

Overheard at the Furnace Creek Inn in Death Valley: “If it weren’t for verbs, nothing would ever get done.” 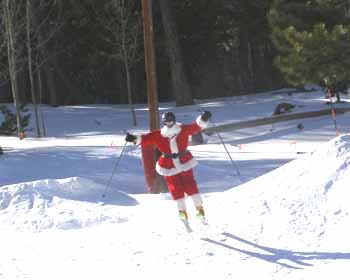