Last time I promised more about Carson City, the state capital that once bragged it was the smallest one of all the 48.

Now, having absorbed Ormsby County, it is among the largest, in land area at least. And that’s not all that’s different about Carson City. From the visitor’s perspective new cosmopolitan characteristics are beginning to appear; it’s no longer a one-martini town.

I’ve made some suggestions about martinis, and about good places for meals. There are many others, these just happen to be places I’ve visited recently and can recommend without hesitation. And many of these can be visited at other times than where I have put them.

No, the Ormsby House isn’t open yet — it’s ony five or six years since remodeling began — but there are four other major casinos (Fandango on the south end of town, Carson Station also on S. Carson Street but closer in, the Nugget downtown, and Gold Dust West (formerly the Piñon Plaza) on Highway 50 East. There are plenty of good motels (Here’s our list). And there are some enjoyable opportunities to experience the city’s history, both in and out of museums.

and stop by the Carson City Visitor Center next to the State Railroad Museum to pick up a packet of info. Or go to www.visitcarsoncity.com and download a few things in advance, particularly this Map of the Historic District. As you’ll see, it contains a suggested walk. I will suggest another so you’ll have two to choose from, but first, just go next door to the State Railroad Museum.

This is the place I mentioned last time for the high quality of its gift shop. It turns out that they have some railroad artifacts

in there too. Actually, the 19th century locomotives, tenders and cars are so enormous, so

painstakingly restored and so immaculate that they loom like huge sculptures, idealized forms rather than working machines.

Don’t consider that a criticism, quite the opposite, the effect is powerful and it will stay with you. And besides, the museum maintains a busy Operating Schedule for motorcar and steam trains on the Museum grounds.

And to put things into a smaller perspective, migrate to the far corner of the exhibit building to find a model railroad under construction. The purpose of these miniature choo-choos in the same barn with the iron giants is to demonstrate other eras of railroading beyond the Victorian, and maybe to have something that moves and makes sounds in the stillness. The model layout is being assembled by volunteers, and other volunteers do the many hands-on jobs required to repair, restore, maintain and operate the gleaming beauties on display here. Volunteers even manage an informative website about the museum.

When you’re finished here, head north for the state museum at 600 N. Carson street, park, then walk back south and spend an hour wandering the streets of the historic district, map in hand. These houses reflect the early city of the 1860s and ’70s, and the walk is almost enough to take you there. To help with the time travel the Visitor Center will outfit you with a CD with dramatized tales of these houses and their inhabitants. You can listen to these on the website, but their impact is undeniably stronger when you’re standing (or parked) right at the gate at 502 North Division Street as Sam Clemens, aka Mark Twain (portrayed by McAvoy Layne), tells us about his elder brother Orion and this fine house he built in 1863.

I used to recommend a certain path to follow through the streets of old Carson City, but I get to writing novels about the original residents (Orion’s daughter Jenny died at the age of 10 and is buried here) and get all turned around in my directions. Thanks to me, tourists were wandering around for days looking for the Ferris Mansion — yes, the ferris wheel Ferris lived here for a while as a boy — and other marvelous residences in all the wrong places.

I may have been in a reverie as I passed the Rinkle Mansion, erected

by a wealthy wholesale butcher and now occupied by various incarnations of the press. The State Press Association is headquartered here, the capitol bureaus of the the Associated Press and the Las Vegas Review-Journal are here, and others too. I seemed to hear a party in progress, with exuberant babble and the popping of champagne corks. “Three cheers for the new Governor!” cried one voice above the clamor. “Not even one minute into his administration and already headlines! We’ve struck a gusher, boys, it’s the Big Bonanza!”

As the cheers died away another wag shouted out “Stop the Presses!” to a gale of laughter. As I continued out of earshot a dozen voices were fervently singing, “For He’s A Jolly Good Fellow!”. It’s just a short stroll south on Curry to the Great Basin Gallery, displaying Nevada art that is fabulous, exquisite, wonderful. Enter at your own risk.

When you tire of wandering around, go indoors at the Nevada State Museum, 600 North Carson Street, once upon a time the US Mint. It is open from 8:30 am to 4:30 pm. with a wealth of Nevadiana(?) on display. Exhibits are constantly updated and rotated, but don’t worry, the Mine — the soul of the Museum since its founding — is still down there in the basement. 775-687-4810.

If you dawdled long enough over lunch, strolled aimlessly enough as you prowled the historic west side, you should be at or near time for an afternoon refreshment. If you still have the time and inclination for another museum visit, here is a dandy: Warren Engine Company No. 1, the firefighting organization that dates back to 1863, maintains a magnificent museum in the main fire station at 777 South Stewart Street containing apparatus and

equipment, smaller and even gaudier than the locomotives, plus photographs and other memorabilia.

But wait, there’s more: The State Capitol might be the most evocative artifact in the city, what with the Governor and other officials still functioning within the stately earthquake-proofed marble halls. It’s open to visitors during office hours, and decidedly worth inspection.

Remember Vanishing Point? The 1971 movie starred Barry Newman as Jimmy Kowalski, who is delivering a Dodge muscle car from 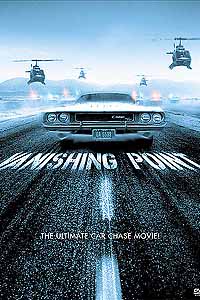 Denver to San Francisco with a big bet riding on how fast he can get there. He catches the attention of the cops before he gets out of Colorado, and they chase him west, through Utah and across the Bonneville Salt Flats into Nevada. At Wendover, Kowalski blasts south down to Highway 50, so he must have gone through Ely and Eureka, but we don’t get a good look until he gets to Austin. Then he seems to have made a U-turn back up over the Toiyabes and then south again on what was then Highway 8A through the Big Smoky Valley to Tonopah.

As he tears up the pavement, Kowalski is listening to Super Soul, an Afro-American disc jockey on (fictional) radio station KOW, broadcasting from the Goldfield Hotel in Goldfield. Super Soul calls Kowalski “the last American hero” and helps him avoid the police by broadcasting the location of roadblocks. Super Soul’s reports elevate Kowalski to national cult hero status, and Goldfield attracts a crowd of shaggy counterculturals. You’ll see numerous old-time Goldfielders playing themselves in this unique time capsule. In the end, Kowalski drives the Dodge into a bulldozer with a fiery crash. I was reminded of this classic movie by the announcement that KGFN (106.3) is now broadcasting from Goldfield with news, sports and music, so far no roadblock reports and no fiery crashes.

Quick notes from beyond the mountains: Nevada climate news in a nutshell: Elko’s Snowmobile Rendezvous was cancelled due to lack of snow, and the folks at Lake Tahoe sent out a news release eagerly announcing there was fresh snow — in the middle of February . . .

But the Las Vegas Ski & Snowboard Resort on Mt. Charleston has plenty of snow, as well as specials for every day of the week — Tuesday is Beach Day with aloha shirts, a poker run and drink specials. Thursdays are Ladies Day: All women recieve a $35 All Day Lift Ticket. And it’s just 45 minutes from the Strip . . . Lovelock has more than a round court house to lure you off the freeway these days.

The Cowpoke Cafe is excellent, with the emphasis on home-baked and home-cooked American favorites. Their motto: “Eat here

before we both starve.” It’s a nice culinary complement to La Casita, the equally excellent Mexican restaurant. More Lovelock news: About 500 Lovers’ Locks, most of them the brass ones available at the Chamber of Commerce and around town, but some of them straight from the hardware store, are glittering in the sunlight in the little park behind the Court House . . . Did you know that there are more than 1,000 motel rooms in Winnemucca? I didn’t either, but there are, because so many I-80 travelers break their journey there . . . Here is a very nice website with beautiful photographs of Tonopah and its surrounds by local photographer Teresa Madsen . . . Virginia City hosts the 16th Annual Mountain Oyster Fry on Saturday, March 17th. There will be a St. Patrick’s Day parade at noon, and individual celebrations in most of the local saloons.

Cooks will compete in several categories using recently-severed lamb testicles from New Zealand. Call the Virginia City Visitor Center (775-847-4386) or Jett at the Union Brewery (775-847-0916) for info and application forms for both cooking and parading . . . The Nevada Commission for Cultural Affairs has made a $300,000 grant to reconstruct the 140 year old roof and spire structure of the historic St. Augustine’s Church in Austin. The restored Gothic Revival structure will become St. Augustine’s Cultural Center, and once the roofing project is completed, it can be opened for tours. The ten-year restoration project will include stabilizing the interior murals, restoring the beautiful Henry Kilgen pipe organ, installing electrical and plumbing services, and fitting the building for performing arts and exhibits. St. Augustine’s will host a 140th anniversary celebration July 20 to formally launch the roofing project.

Overheard at the Overland Hotel in Pioche: “You don’t get rewarded for taking a moral stance and the sooner you learn that, the happier you’ll be when you take one.”