Our travels have been somewhat curtailed by heavy workload in January. One product of the work is the spiffy new website for the Hotel Nevada & Gambling Hall in Ely, featuring the dancing burro. Click him and he’ll dance again. Click the link to visit the site.

When the Washington Post named Battle Mountain the Armpit of America, the local folks were stunned and angry. They had been minding their own business, and out of nowhere they’d been blindsided, mugged in the national press.

Or had they? Now that the shock has passed, Battle Mountaineers are beginning to think they were floored by the unfamiliar knock of opportunity. Armpit t-shirts are already available at the drug store, and planning is underway for an Armpit Festival this summer. The Battle Mountain Chamber of Commerce has sent a blanket invitation to any community that has been considered an armpit: they can have free booths at the festival if they’ll just show up and man them. The Bakersfield Chamber of Commerce is already chartering a bus to bring members to Battle Mountain to see what they’ve got that Bakersfield doesn’t.

CNN broadcast some footage of celebrity journalist John Tyson interviewing a lively crowd of more than 100 Battle Mountaineers on the topic. The United States Chamber of Commerce is watching anxiously, hoping Battle Mountain will be the “poster child” for the other ugly ducklings around America. Various armpit icons are being proposed for display, from the Statue of Liberty to Adolph Hitler. And not only did USA Today run an article on the situation, they’ve offered to make bumper stickers saying ‘Don’t roll on by. Make Battle Mountain your next pit stop.'” .

In the meantime, Battle Mountain Bugle owner Lee Denmark fired the newspaper’s editor over her casual acceptance of the armpit description. As soon as Gene Weingarten (the author of the Post’s article) heard about that, he applied for the vacant job.

“Please accept my application for the job of editor in chief, an opening that was recently advertised in your newspaper,” he wrote with earnest facetiousness.

“You say you seek a person with writing skills and ‘a strong sense of community.’ Well, I think I am your man. I write swell. Plus, not long ago when I dropped by your town to do a magazine cover story, I got so strong a sense of the community that I called it the Armpit of America. When your editor playfully agreed, you fired her.

“Well, relax. Your search for a successor is over. I have long dreamed of having a job like this because it seems to me the editor of a small-town newspaper can get away with just about anything.”

Gene’s application was rejected, but one local man thought Lee Denmark missed a bet. “He should have offered him the job: $20,000 a year and you live in Battle Mountain.”

A fellow named Dave Woodson got the job. He moved to Battle Mountain without a qualm.

After untold years, the “S” in the Shell Station’s sign has been fixed.

And the Chamber of Commerce has hired NevadaWeb to build a website so they can take full advantage of all the new attention being paid to them on account of the armpit hubbub. Watch for it soon.

Overheard at the Gold Hill Hotel bar: “People who keep dogs are cowards who haven’t got the guts to bite people themselves.”

Waaaaaaah! The Walls Are Bare at Sharkey’s! 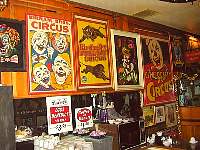 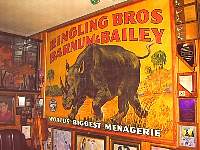 When Robin and I walked into Sharkey’s Casino in Gardnerville a few days ago we were saddened to see that one of Nevada’s great attractions is no more. When Sharkey Begovitch sold his landmark casino a few weeks ago, he took down the collections of circus, rodeo and boxing memorabilia he had collected over 32 years, and consigned them to auction. 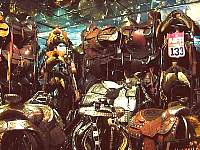 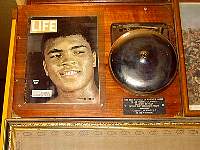 The new owners (they have the Silver Club in Sparks and the El Capitan in Hawthorne) promise to maintain the prime rib tradition. But one question has yet to be answered: what are they going to put up on those walls. Our suggestion: Nevada art.