One of the pleasures of the freeway is getting off of it.

So when I was driving I-80 last month I made a detour at Carlin. The ghostly old Commercial Row hotels, cafes, saloons and stores by the railroad yard seems to have been cleaned up a degree or two but it’s still a photography assignment. Nevada Highway 278 goes south out of Carlin and proceeds 92 miles to US 50 at Eureka. At about ten miles along you’ll come to a turnoff to the west marked Palisade. Take it

around the shoulder of a hill and across the river on the broad new bridge and you’re at the outskirt (an upside down school bus in a bed of dried mud) of Palisade. The trains of two railroads come crashing through here day and night, engines roaring, horns blaring. 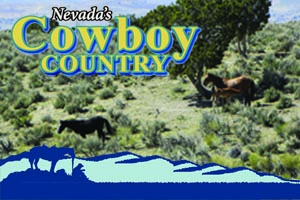 is now a clutter of sagging structures and rusting cars.

And the heir has a daughter ready for college, so old Palisade was auctioned off to “an anonymous buyer” to send her there. Price: $150,000 according to the SF Chronicle.

There is a small cemetery and a row of dugout structures along the river’s bank that suggest Palisade’s busy and hardscrabble past.

Back in the days when Palisade was busy with freight and passengers, local comedians entertained themselves by staging gun fights on the depot platform as trains pulled in from the east. Frightened passengers hid under their seats and gave up their waiting dinners at the depot cafe rather than face the flying bullets, and went on hungry and half-traumatized, to Winnemucca. It was a wheeze!

There are two roads out of Palisade besides the one to Carlin. One follows the course of the river and the railroad about 18 miles west to Beowawe, where the pavement resumes. I took the other one, which climbs steeply north and proceeds across the grain of the country, eventually arriving at freeway offramp 271. In the process I schmoozed my way through a semi-friendly herd of white cows with their calves who thought they owned the place. It’s steep in places, but basically an easy drive on a well-graded road through beautiful landscapes, perfectly fine for the family sedan.

We made another visit to Mesquite. We like its laid-back version of get-up-and-go.

This time we stayed at the new Falcon Ridge Hotel, standing on a hill of bare dirt overlooking the Oasis and the Casa Blanca at the west end of town. It had opened three years ago, but did not prosper. It has just now been retrieved from bankruptcy and reopened in new hands. We like it because it’s new, comfortable, quiet — no casino — has an elegant feel without being expensive, offers high-speed internet and a guest laundry, and is pet-friendly. Golf, Spa and

Honeymoon Packages are the specialties of the house, but with a desk, a microwave and a refrigerator, we can settle in and work comfortably while we’re on the road (the petite suite is perfect for us), the staff is helpful and there’s a free hot breakfast buffet too — what’s not to like?

Brief notes from beyond the mountains: Here is a website devoted to Nevada Wildflowers in this lush and lavish year . . .

Tonopah’s Mizpah Hotel has been sold, for real this time. The sale is to a Las Vegas partnership which plans to restore the Mizpah to something like the elegance it enjoyed after its first restoration in 1979 . . . One of the partners has also purchased the Belvada Building across the street. Together with the Mizpah, the “Belvada Hilton” establishes Tonopah’s urban skyline, but it’s in poor repair and will require considerable work before it reopens to the public. Originally an office building, with glass doors and transomes above them, it had been converted to apartments many decades back, with most of the original appointments still in place . . . Beatty‘s business establishment is in for major changes as both the Exchange Club and the Burro Inn have been sold to a single new owner . . .McAvoy Lane and Remmel Wilson, who premiered Nevada’s Story at Comma Coffee last month, are now presenting their two-man multi-media production as a weekly Dinner Show on Tuesday evenings from 6-8pm at the Zephyr Cove Melody Tent at Lake Tahoe. Tickets are $49; for reservations phone 800-23TAHOE. When I attended the premiere of this laughable show (I mean everybody was laughing), I expected Baron Von Remmel to be a foil, a sort of second banana to The Ghost of Mark Twain, who wrote and narrates the story, and has all the best lines. It turns out that Wilson can play the saxophone for real. His musicianship is a major part of the enjoyment, and the enjoyment is considerable . . . Street Theater: The Virginia City Convention & Tourism Authority (775-847-0311) is calling for volunteers to dress up in historical clothing to showcase the colorful and exciting history of Virginia City by chatting up the tourists and answering their questions.

Overheard at the Loser’s Lounge at the Riverside Resort in Laughlin: “True friends stab you in the front.”