Before the big snows fell I took a pleasant trip which I’ll recommend to anyone who enjoys rambling along the dirt roads of western Nevada.

But first, why are some people “creeped out” by Hawthorne, as a friend told me the other day? Creeped out? By Hawthorne? I admit that Hawthorne is a long haul from Versailles, but it’s very close to Mayberry and I always have a good time there. It has something to do with Hawthorne’s explosive personality — the ammunition bunkers that dominate the scene with disturbing intimations of death and destruction.

Yet we regularly get fan mail for Hawthorne from people who love its calm and friendly streets where kids still deliver the weekly paper on bicycles. There are so many pleasant things about Hawthorne I hardly know where to start. Well, let’s start with an aperitif at Joe’s Tavern and then something to eat at The El Capitan, Maggie’s Cafe or Henry Wong’s Chinese Fast Food. If it’s Friday stop and watch the Whirlwind of Cash at the El Cap. I stood in the admiring circle as a man snatched $94 out of the air swirling in the glass closet. Can you ask for better than that?

Anyway, I drove west out of Hawthorne on Nevada Highway 359, and then north on the Lucky Boy Pass road.

There had been snow the day before, but I had no trouble with the smoothly graded dirt road that curls and climbs to 8,001′ with 10,520′

Corey Peak and 11,245′ Mount Grant looming on the north. I’ve mislaid my mileage notes, but it was an easy and enjoyable drive as the road follows the old wagon route over rises, around

shoulders, across gulches, and otherwise following the contour of the landscape and encouraging a leisurely pace.

I took the 6 mile digression to Aurora, but it climbs the canyon alongside Bodie Creek and by the time I arrived at the modern mining operation that has replaced the old city, the road was pretty mushy. The road to the cemetery was two inches of snow over a foot of mud, so I decided to leave that discovery for another day. 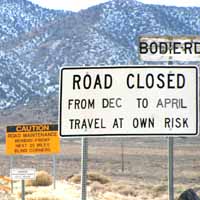 I went back down canyon and continued north, fording Rough Creek, following the course of the East Walker for a few miles, and eventually rejoining the pavement of Nevada Highway 338 about 20 miles south of Wellington. In Wellington the Heyday Inn provides sustenance after the pleasant drive.

Every day we receive 5-10 e-mails requesting information about some aspect or other of Nevada. Over the course of a year the range of inquiry is wide, but some questions are asked over and over again. If I had the time and the energy to create an FAQ page for this website, these would be the top three entries:

1: Are there scheduled flights to Ely? Yes indeed. A Scenic Airline Twin Otter departs North Las Vegas every afternoon at 5 pm except Saturday, arriving 6:50 pm. Every morning except Sunday it returns from Ely to North Las Vegas at 7 am, arriving 8:50 am.

2: How can we get married in Jackpot? There is a Justice of the Peace in Jackpot who will marry you, but to get a marriage license you have to go the the County Clerk’s office at the Elko County Court House during business hours. Then you can make the 125 mile drive back to Jackpot, or you can get married in Elko, where there is not only a JP, but a wedding chapel too.

3: When is the Genoa Candy Dance? It is always the last full weekend in September. So, in 2005, it is September 24 and 25. You may call the Carson Valley Chamber of Commerce and Visitors Authority at 775-782-8144, or the town of Genoa for additional information at 775-782-8696 or e-mail genoa@co.douglas.nv.us.
Sometimes I don’t know the answer and that’s when the Nevada Travel Network springs into action. For example, here is an inquiry that came in a few days ago from Holly in California.

“Is there any place to X-Country Ski near Elko? Or downhill? We are thinking of a trip to Elko and would like to ski.”

My knowledge on this topic is nil, so I sent the inquiry on to our friends at the Elko Convention and Visitors Authority. They had information on the SnoBowl (775-738-6125), Elko’s ski hill with a rope tow and a lift for skiers and snowboarders. For expert advice on cross-country skiing they called on a local enthusiast who detailed eight cross-country skiing locations from Lamoille Canyon to Soldier Creek. If you’d like a copy of his recommendations, click here.

Quick notes from beyond the mountains: Scenic Airline is about to add Elko to its scheduled service with two new 19-seat Beech 1900D aircraft. Elko-Las Vegas flights will begin in February or March and after that Scenic will assume the Elko-Reno route

from Sky West . . . Speaking of flights, the new fly-in junket flights to Wendover are sparking losts of interest. Interested? Call 1-866-FLY-WENDOVER; there’s no website yet . . . Winnemucca has a grass roots music scene that includes performances by visiting artists, usually at the Martin Hotel sponsored by the all-volunteer Great Basin Arts & Entertainment . . . The SilverJack Motel in Baker has a new owner: Terry Marasco has taken over from Bill and Kathy Rountree. I met the amiable Bill about 30 years ago, he was my first guide to Baker. Later I reported on his aeronautical experiments, like the space probe pictured above. Terry is paying homage to Bill’s exploits in the infinitudes by naming the new ‘Lectrolux Gallery Café & Movie House in honor of this spunky little spacebuster, but the real test is: will he keep the Imelda Marcos Suite?

Overheard in La Casita Mexican Restaurant on Cornell Street in Lovelock: “The worst part of doing nothing is you never get any time off.”