There’s a paunchy, nearly toothless bewhiskered old guy who’s always wearing a goofy grin and has been a familiar figure on Victorian Avenue in Sparks for more than 50 years — since it was still B Street in fact. When he became suddenly homeless in 2014 a number of local folks made a big effort to help get him cleaned up, rehabbed and relocated. Last Chance Joe has finally returned to his old neighborhood, but across the street, in front of the Sparks Heritage Museum. You can’t miss him, he’s 32 feet tall. 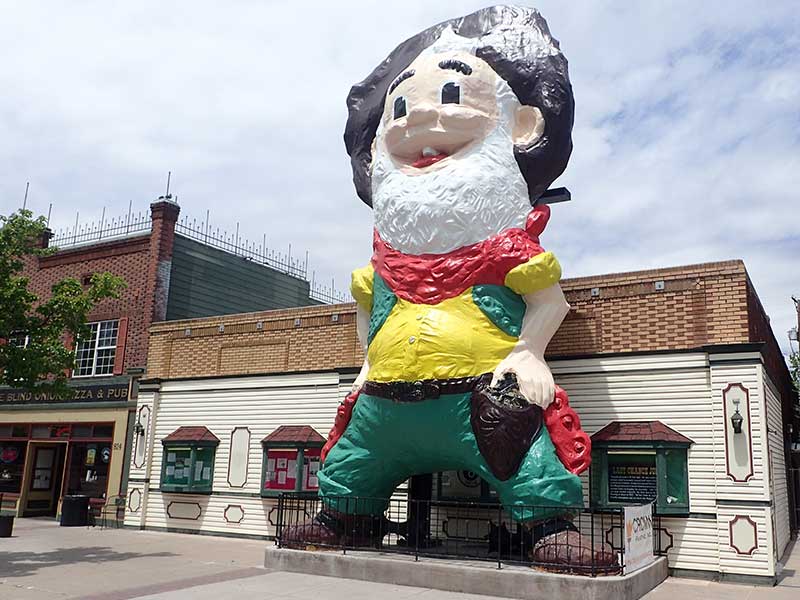 Joe had stood for 56 years at the entrance to the Sparks Nugget when a new owner decided he was old and in the way. Now, after four years in limbo he’s back on the Avenue, all spruced up and glowing with . . . fresh paint.

All this has been accomplished at considerable expense and effort; the whole Last Chance Joe story is here. If you live in Sparks, or just want to dress up your ride, you can put Joe on your car fore and aft in the form of this Special Plate from the Nevada DMV.

He has also been patched and puttied, painted, polished and placed just west of the entrance to the Museum where he will be dedicated and welcomed home at 5:30 pm on September 22. There’s something contagious about that smile he’s wearing . . . I think I’ll go.

I like to think about just getting in the car and driving out some randomly chosen road, following my nose out into the mountains (the car is a 4wd FJ-Cruiser), making spontaneous decisions about which way to turn, stopping whenever the impulse demands it, and ending up God knows where.

I don’t allow myself to do it very often — only once since we got this car four years ago — because of the demands of my trade, which hold me to a schedule. Every drive I take is timed to take in any available attraction because we’re always looking for what’s new and interesting along the main lines of travel — paved roads — and that’s the antithesis of wandering. 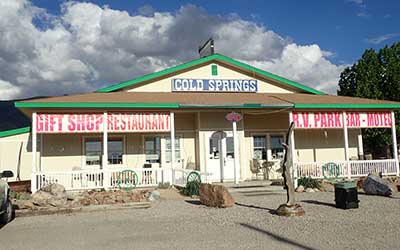 It’s easy to imagine wandering in to Cold Springs Station Resort when traveling on Old Lonely, not so easy to imagine it as the Pony Express station it once was. The resort is a combination restaurant, bar and gift shop with two rows of motel units and two RV areas. This place is positively modern — there are banks of solar panels deployed out back.

So it’s not the Cold Springs Station that greeted the Pony Express riders dashing in from Middlegate Station In 1860.

In that year Sir Richard Burton, a famous British explorer and writer of the time, traveled with a mule train along the Pony Express Trail. His diary provides some of the clearest glimpses we have of central Nevada in that period, including this entry made two stations west at Sand Springs Station, on October 17, 1860.

At last at 2:30 am thoroughly ‘knocked up,’ we sighted a roofless shed, found a haystack, and reckless of supper or of stamping horses, fell asleep upon the sand. . . . 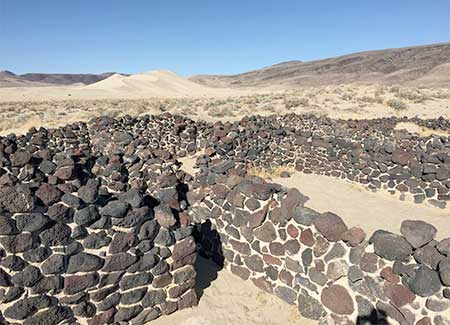 “Sand Springs deserved its name. Like the Brazas de San Diego and other mauraises near the Rio Grande, the land is cumbered here and there with drifted ridges of the finest sand, sometimes 200 feet high and shifting before every gale. . . .

The water near the vile hole was thick and stale with sulfury salts: it blistered even the hands. The station house was no unfit object on such a scene, roofless and chairless, filthy and squalid, with a smoky fire in one corner, impure floor, the walls open to every wind, and the interior full of dust. Hibernia, herself, never produced aught more characteristic. Of the employees, all loitered and sauntered about desoeuvre’s as cretins except one, who lay on the ground crippled and apparently dying by the fall of a horse upon his breastbone.

So much for the romance of the frontier. 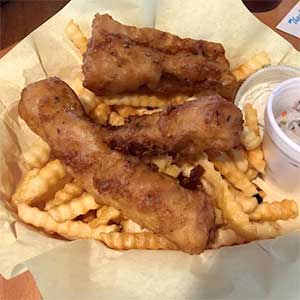 And because we are not wandering at all, we haven’t stopped for a glimpse of historic authenticity but for its precise opposite.

We’ve come for the fish.

Specifically we’ve come for the “Fish Fry in the Desert”, a Cold Springs tradition on the 3rd Friday of each month (except December) for the past ten years or so: A delicious clam chowder and as many big chunks of Atlantic cod as you can put away.

Furthermore the modern Cold Springs Station is now a Resort under new owners George and Barbara McNeil, with a roof and chairs and everything, all sparkling clean and nobody dying quietly in the corner. 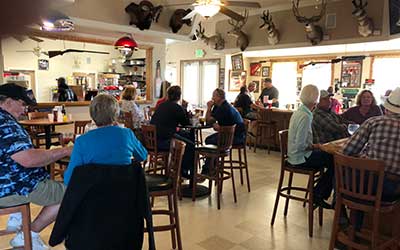 We couldn’t accommodate any more than the three big pieces of cod that came on a bed of french fries, but the fellow at the next table was a shark. George told me that the house record is six pieces.

So . . . Most times we whiz right by (if we didn’t bypass it altogether by taking Old 50 — now Nevada Highway 722) but we knew about the 3rd Friday Fish Fry and made sure to get there early. If you’d been driving that evening and decided on a whim to pull in for dinner, you’d still be describing the experience to friends. And Cold Springs is open every day. . . .

We drove on to Eureka after dinner and were up early for another experience available to wanderers: we swept the downtown sidewalks.

If you had wandered to Eureka and were drifting past the Library on Monroe Street a little after 8 o’clock, you’d have seen us. 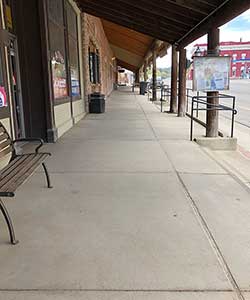 We were among the volunteers pulling on t-shirts, collecting brooms, shovels and voluminous plastic bags, and then setting out to sweep the sidewalks on Main Street.

And if you’d wandered up and held out a hand, somebody would have put a broom in it.

About a dozen of us worked both sides of the street for a couple of hours. Highly satisfactory.

And if you had lunch and then strolled around exploring the town for a while, you could have joined the crowd at the Eureka Opera House for the Nevada State Old Time Fiddlers’ Contest that afternoon. 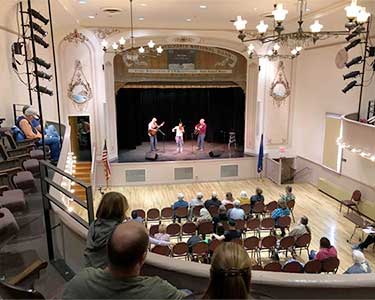 Of course we come to this event in complete ignorance, and that may be the best way.

It certainly didn’t interfere with enjoying it and it encourages discovery. A series of contestants came out on the hallowed old stage with one or two accompanists, generally guitar and bass, and fiddled like mad.

By the second round we were ranking the contestants and picking winners like experts. And had to restrain our impulse to object to wrong-headed decisions by the judges. 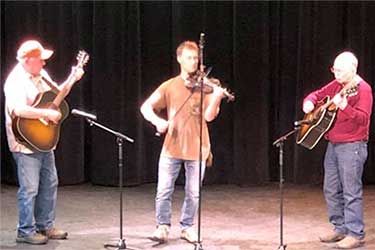 Among the 100 or so in the audience — most of them out-of-towners — was Kathy Bly of Carson City Community Radio KNVC who recorded her visit here:

Everyone is invited to “Discover Nevada State Parks” on Saturday, June 9 for a free day-use admission and free fishing (no license required) at all of Nevada’s State Parks.

politicians and the public spanned some 35 years, is one of the state’s most notorious 20th century figures. Over a series of interviews with respected Nevada historian and author, David Toll, Conforte tells his story in his own words, sparing no one including federal judges and prominent lawmakers.

It is a breezy read that often borders on the comical yet sheds light on the history of legal prostitution albeit with a prejudiced view.

Although it is difficult to find any sympathy or decency in the derelict protagonist, it is a must read for those that want to understand the brothel business and Nevada in the 60’s,70’s and 80’s.” — A review by KG Guy of Las Vegas at amazon.com

Here’s a revealing excerpt about local Nevada politics in the 1970s — the Nevada history you seldom see written down.

The Nevada Division of State Parks is getting ready to unveil a pair of new state parks.

Ice Age Fossils State Park is located in North Las Vegas Valley near the Floyd Lamb County Park.  The park is an important paleontological site where Carbon 14 dating technology was first used to determine the age of fossils. Its abundance of fossils date back to the most recent ice age.  The park will embrace interpretive walks, a Visitor Center and campsites with a grand opening in July.

The Walker River Recreation Area, in Mineral and Lyon counties will incorporate 29 scenic miles of the East Walker River in Western Nevada and is made up of four former ranches. Much of the property of the park has not been open to the public for 125 years. Besides hosting fishing, hunting, hiking, equestrian use, OHV use and camping, the park will be important to the restoration of Walker Lake and protection of the Walker River watershed.  A grand opening for the Recreation Area is planned for September.