by Curtis Fong
“The Guy From Tahoe”

When anyone asks, “Where are you Skiing?”, most people respond with the obvious names of well known resorts — Heavenly, Vail, Park City, Killington — or a geographic location such as Tahoe, Colorado, British Columbia. Others describe their skiing by Mountain Ranges: the Sierra Nevada, Rockies, Wasatch, Cascade or Bugaboos. 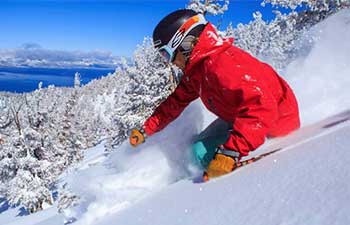 Nobody ever says Nevada when it comes to winter sports, but there are several resorts in Nevada where skiing & snowboarding are prime — and they are not in the Sierra Nevada.

Heavenly Mountain Resort has many of its lifts and runs on the Nevada side at Stateline on the South Shore of Lake Tahoe. Heavenly North, as it is referred to, has two base lodge facilities that skiers and riders can start from: Boulder Lodge and Stagecoach Lodge, both located off of Tramway Drive at the top of Kingsbury Grade (Nevada 207).

Nine lifts & tows (out of a total of 28) are accessed out of these two lodges serving terrain on Heavenly’s Nevada side, and there are 52 named trails (out of a total of 97) on the Nevada side. One can ski back and forth from Nevada to California and vice versa, from the top of either side of the resort when there is a normal winter snow pack. This winter has started off slow and if it were not for their snowmaking system, there would be very few lifts and runs open at Heavenly Mountain. 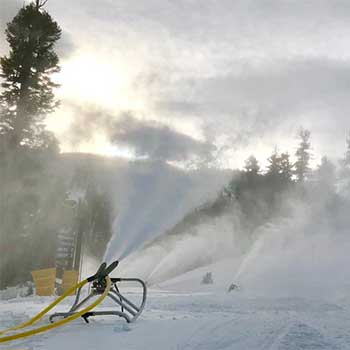 Heavenly has one of the largest snowmaking systems in the west and has been known to lay down as much snow, equal to 6” deep, overnight, on a full football field, when conditions and overnight temperatures permit. With this year’s slow start to winter, their snowmaking system allowed them to open the top of the Nevada side with Dipper Express on November 21. Comet Express was opened the next day, and by December 8 they were able to open Stagecoach Lodge and fire up Stagecoach Express to access the Upper Nevada side of the mountain.

The Nevada side of Heavenly also has some of the steepest and most challenging terrain of all the Tahoe resorts, with both Mott & Killebrew Canyons, steep and narrow avalanche chutes with no room for errors. I recall when the Mott Canyon Lift was built, I toured this area with their mountain manager and skied “The Y” and “Bill’s Run”. It was steep and narrow, and you had to set up every turn through the bumps and hope you didn’t blow an edge or get too far forward or back on your skis.

When it snows big time, all the way down with snow in the Carson Valley, many adventure skiers and riders ski down this backside to base of Kingsbury Grade with a little bush-wacking and skirting private property lines. On these days you can see skiers putting their thumbs out looking to hitch-hike back up. Nowadays there is a ride-share parking lot and a bus stop at the bottom of Kingsbury with shuttle bus service between Gardnerville and Stateline. 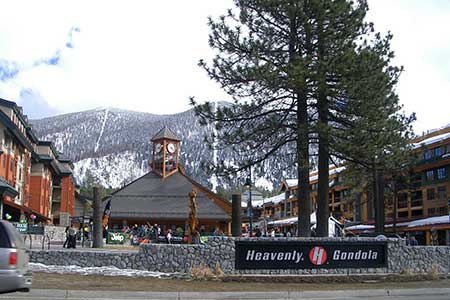 In the 1970-80’s, Heavenly hosted International World Cup Events, and the Nevada side of the mountain had a fully homologated FIS Women’s Downhill Course, still called “Olympic Downhill”. This run started at the top of their Olympic Lift on the mid mountain and ran straight down the Nevada side with a steep drop to the finish. The finish area was served by its own lift, the Wells Fargo, which was removed many years ago and the run closed off. Most skiershave no idea this run ever existed, but its re-vegetated footprint is visible from Nevada 207 (Kingsbury Grade) at the top of Daggett Pass.

Although nothing beats sliding on real snow, their machine made snow, when it’s machine packed & groomed is a satisfying surface for any skier or snowboarder and most welcomed when Mother Nature doesn’t deliver the goods in a timely fashion. The investment in snowmaking has proven to be extremely beneficial for Lake Tahoe resorts to provide a product when Mother Nature takes a break.

Diamond Peak in Incline Village was the first resort to invest in snowmaking in the West. Originally known as Ski Incline, this resort installed snow making when it was opened in 1966. Here is an excerpt from Diamond Peak’s History:

“Art Wood, an entrepreneur from Oklahoma, and his associate Harold Tiller envisioned the creation of Incline Village — a master-planned vacation resort community on the northeastern shore of Lake Tahoe. Ski Incline, now known as Diamond Peak Ski Resort, was one of Art Wood’s cornerstone recreation amenities in his master-planned “Pebble Beach of the Sierra.” In 1966, Luggi Foeger, a renowned Austrian-born ski resort consultant, was hired to design and build the resort. 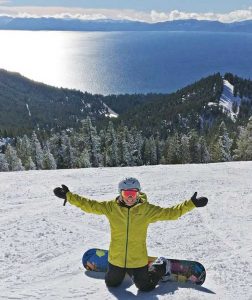 “Art Wood put his faith in Foeger and committed $2 million to build Ski Incline. While everyone in the ski industry predicted failure, Foeger’s vision turned out to be even more profound, since his new ski area was designed to include the first snowmaking equipment in the western United States. With the installation of snowmaking technology, Ski Incline became the first resort in the West to employ this insurance policy against Mother Nature’s stinginess. Time and again, during drought and late-snow years, these systems have enabled the resort to create a top-quality ski experience. Soon many other Tahoe area resorts followed suit.”

In 1985, Ski Incline got approval to install the mile-long Crystal Quad Chair to the top of the peak and expand the lift system and snowmaking capacity. With this steeper and more advanced terrain, the resort changed its name to Diamond Peak at Ski Incline… to reflect Black Diamond Terrain… Since then, “Diamond Peak” stuck and “Ski Incline” was retired.

With Diamond Peak’s snowmaking system, they were able to get open for top to bottom skiing and riding on December 14. Although only a few runs were opened, snowmaking was the difference, as it has been in other low snow years.

Mount Rose Ski Tahoe is another great Nevada resort. When I first started to ski in the Tahoe area, in the mid to late 60’s, there were two different resorts at the top of Hwy 431, Slide Mountain Ski Area and Mount Rose Ski Area, and there was a fence dividing the resorts between their lifts and runs at the top of the mountain.

I recall driving up from Sacramento and passing Squaw Valley, Alpine Meadows, Ski Incline, Mt. Rose and skiing more times at Slide Mountain. It was wide open and there were no crowds and I helped organize my college ski club to spend new years ski trips staying in Reno and skiing at Slide Mountain. I recall one of the best things after skiing was heading to downtown Reno and stuffing my face at the El Dorado Casino Buffet — for a mere $1.85, well worth the big money then, when lift tickets were $6 and gas was 20 cents a gallon.

Mt. Rose Ski Tahoe is steeped in history and the two resorts combined in 1987/88 under one ownership and has continued to develop as a modern, efficient resort. 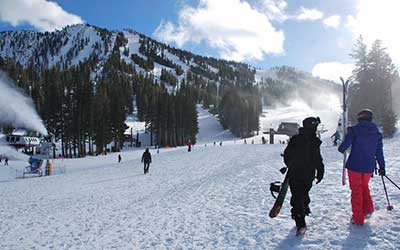 Mt. Rose on one side and Slide Bowl on the other and connected with upgraded lifts at the top, more runs, more grooming machines, snowmaking and most recently, the additional to some of the steepest and challenging terrain offered anywhere. In 2004/5 they opened the Chuter Lift and skier/rider access to “The Chutes”.

These are a series of gated, full-on avalanche chutes that are controlled by their Professional Ski Patrol (Snow Safety, Controlled avalanche blasting & mitigation) before they are open for skier & riders to take the plunge.

Mt. Rose Ski Tahoe’s high base elevation continues to receive snow as global warming affects snow levels at lower altitude resorts. They do have snowmaking gear and use it when necessary, and they received enough natural snow to be the first resort to open this year on November 8. Since then, while other resorts are depending on snowmaking, Mt. Rose has received enough natural snow to open both sides of the mountain with all lifts & trails accessible, minus the Chutes.

These 3 resorts — Heavenly, Diamond Peak and Mt. Rose — are in the Carson Range, not the Sierra Nevada. Now that’s something to ponder.

There is skiing in other parts of Nevada as well, and next time I will visit with Ruby Mountain Heli-Skiing and Elko Snobowl. Heck, I might as well cover What Happens in Las Vegas – Stays in Las Vegas as not too many skiers and riders know about Ski Las Vegas – Lee Canyon Resort. Tune in next month. 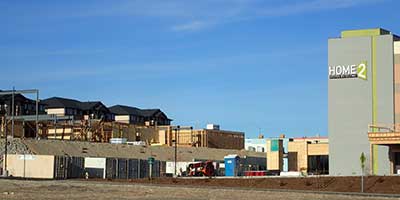 Travelers to Elko find a lot of new hotels to choose from these days. The new Hampton Inn added 80 rooms and Ledgestone added 84. A 107-room Home2 Suites by Hilton is under construction on East Jennings Way and a 98-room Holiday Inn is being built on Ruby Vista Drive. Completion of these projects will provide 2,385 rooms awaiting travelers in Elko.

The existing Holiday Inn Express on Idaho Street will become a Sheraton 4 Points franchise. And that’s not all. The Oak Tree Inn, has become a Baymont Inn and Suites, and the hallowed Stockmen’s on Railroad Street is now The Stockmen’s Casino and Ramada Hotel.

Can’t wait to try one? Book a Room in Elko (Or anywhere in the world)

John Arant demonstrates a perfect Picon Punch at the Martin Hotel in Winnemucca.