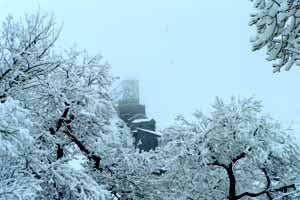 When I came to the Comstock, winters were cruel. “Getting through winter” was hard work on top of the rest of the hard work required to live in this demanding place.

If we could, and as much as we could, we hibernated. Waited out the long nights, the frozen pipes, the snow drifted chest-high in the driveway, the icy roads, the cracked engine blocks. Winter was pure hardship.

and I joined friends from Virginia City for the Chinese New Year celebration orchestrated by Richard and Linda Gong at their C Street restaurant, Mandarin Garden.

The evening began at the buffet table, where a grand feast of the house specialties had been spread before us in a grand display.

When we had all we could manage of the delicious food, the program began. Ah, what a show it was!

Our interlocutor introduced the performers, who varied from skilled professionals to dutiful amateurs, and who combined to make a hugely entertaining evening — maybe something like they do in small-town China. Star of the show was Ying Ying, a magician of great prowess. Even on that makeshift stage, with no props, lighting or facilities of any kind, not even any elbow room to speak of — working without a net, you might say, and working hard — she amazed us and made us laugh.

Quick notes from beyond the mountains: Nevada’s Silver Trails Territory has a terrific new website showcasing the attractions, activities and events in the state’s most varied Tourism Territory
. . . A few months ago an Ely friend sent me information about artist Anthony Ithurralde, now living in Salt Lake City. Anthony had initiated a Kickstarter project to fund a series of satirical paintings on the Great Southern Nevada Water Grab and its effect on the majestic landscapes and peoples’ livelihoods in the northeast. I put in $30 for a set of 7
cards and just got word that they are nearly ready. I’m watching the mailbox . . .

On Tuesday evenings from 5 to 9 the Lounge area around the Grand Piano inside Stockman’s Steakhouse at the Pahrump Nugget is devoted to jazz. Tommy Deering plays piano, synthesizer and sings. Tom Saitta sings too, and plays trumpet and flugelhorn. They combine talents in “Great Songs From America’s Past and Present” . . .

Starting Wednesday March 6, Nevada Northern Railway in Ely is holding an online auction featuring more than $80,000 worth of dream items from the Nevada Northern — from top-of-the line ‘BE the Engineer’ opportunities and Railroad Reality Week Experiences to special event train rides, including Haunted Ghost Trains, Polar Express, Rockin’ & Rollin’ Geology Trains, Wild West Trains and more.Opening bids start at as much as 55% off the regular prices, but the auction ends Monday, March 18. Don’t miss the train! Details here . . .

Shen Yun 2013, the spectacular show bringing to life 5,000 years of civilization through classical Chinese dance and music, will play at the Smith Center for the Performing Arts in Las Vegas on March 15, 16 and 17. The grand production features nearly 100 artists, 400 costumes, and the only orchestra in the world featuring both classical Western and Chinese instruments as permanent members . . . Here’s a magnificent collection of photographs of the post-

Civil War west by Timothy O’Sullivan, who spent seven years accompanying exploration expeditions. These images provide a fascinating view of the region at the beginning of exploitation, and confirmed O’Sullivan’s reputation as a photographer.

Overheard at Bookstore in Elko: “You don’t live in the world, Ella Mae, you live in your brain. It’s your brain that lives in the world.”