The World Championship Land Sailing Competition was held last month at Smith Creek Playa west of Austin alongside old US 50 (now Nevada 722). It had been held in recent years at Ivanpah in the Mojave Desert of southeastern California, but perhaps that had not been deemed remote enough by the organizers. 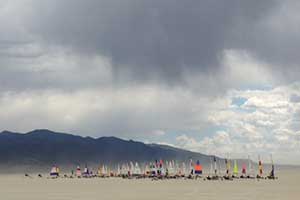 This is terrain traversed at a gallop by Pony Express riders in 1860 and not much changed since then, except by the slow increase in traffic along the old trail prompted by silver discoveries in the nearby mountains. Horses and wagons gave over to flivvers, which gradually became automobiles, more and more of them whizzing past the dry lake bed on the Lincoln Highway. When US 50 was realigned a generation ago to avoid the steep climb to Carroll Summit, the broad oval patch of level white ground in the valley reverted to an almost prehistoric quiet. 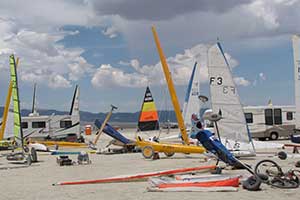 We arrived in early afternoon on the Saturday of the grand finale, to find a large white tent with a couple of food and drink vendors alongside, and a few hundred people milling around in an adjacent chaos of vans, trucks, trailers, paraphernalia galore, and the vessels themselves, some upright with the front wheel tethered, others tipped over to prevent being swept away by the wind.

Except there was no wind. 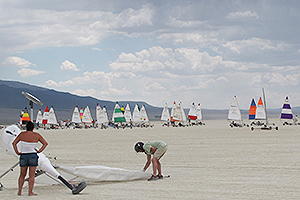 It looks like a lot of fun in the photos and the videos that show these graceful, speedy, colorful landboats on the move, but what’s not so much fun is waiting for the wind to get things started.

The racers and their entourages content themselves with doing equipment maintenance, sleeping, watching movies or cruising the internet via satellite connection. Inside the big tent it was as hot as outdoors, but the shade was welcome. There were tables and chairs where people were waiting for friends, others were at work on their laptops and a couple more on their phones. 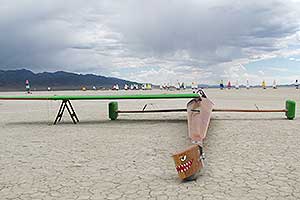 Two or three more fluttered too, and all at once each one of the flags awakened, simultaneously shrugged off sleep, and began to dance. With slow insistence the wind began to rise and the racers began to move. Some of them went darting off into an empty quarter on the playa but most were dawdling, meandering, just stooging around, biding their time until the race would form up. 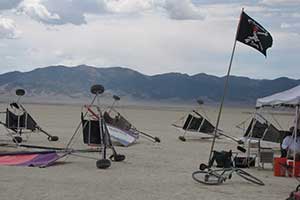 We waited too. And waited, until after a while we didn’t wait any longer. The experience of piloting one of those swift little carts in close competition must be thrilling to the max, but waiting and watching from afar: not so much. 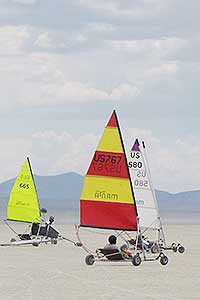 We left for Austin before the race began, if it ever did, but we didn’t feel we’d missed the most important part. We’d had a taste of that world, seen it up closer than we’d ever dreamed we would, and the race itself was really just another detail. You’ll find all the results and a great deal more here. 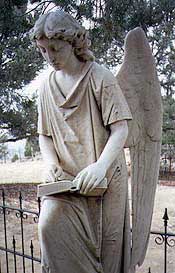 Old Fifty (Nevada Highway 722) rejoins new US 50 just west of the Austin cemetery which offers, if not eternal rest at least a brief respite from the heat and a sense of the human struggle. The highway curls up into the Toiyabes to the city of Austin, once a glittering ornament on the Nevada map.

The Austin Museum, meanwhile was bulging with visitors for the opening and reception for Wally Cuchine of Eureka and the traveling Wally World art show. Selected work from his legendary collection has been traveling the state for months now, with exhibits in Sparks, Virginia City, Fernley and Beatty on its way to Austin.

We visited St. Augustine’s Catholic Church now renovated for use as a Community Center, its organ now completely restored with funds from the 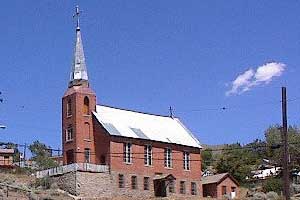 There are three modest motels in Austin, an RV Park, the Union Street B & B, an 1860’s house, fully restored and modernized. A little way out of town is the Paradise Ranch B & B, owned by Bob and Donna Sossa. For decades he worked in the press room at the Cleveland Plain Dealer and when he retired he bought flat land in the Reese River Valley ten miles out of Austin. He told his wife if she would marry him,

he would build her a castle. She did, and he did. Now you can stay there too.

Supposing that the arrival of so many land sailing 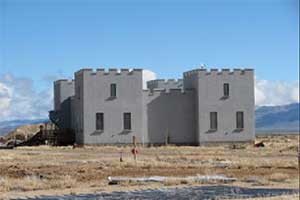 aficionados well-heeled enough to travel here from around the world would attract an influx of hookers to Austin from Las Vegas and Amsterdam, I was disappointed to see Austin’s steep streets as tranquil as usual. There were no abandoned women staggering up and down in stiletto heels, then standing exhausted and gasping in Austin’s crumbling doorways, yellow light pouring out onto the sidewalk from the barrooms where the international millionaire landsailors are disporting themselves, singing sand chanties and spilling single malt whiskies and trendy craft-brewed ale on one another . . . but if that did happen it was after the sun went down, when we were already in Eureka.

In Eureka you’ll see a big yellow school bus parked next to the highway at the west end of town with its back doors open and a lot of stuff on tables around it. That is “Eureka-tiques”, a joint venture between Barbara Dale, who got tired of tending bar, and John Brown,

who had spent many years accumulating a treasure trove of rare and unusual items. We bought a 19th century iron bedstead, some big glass jars and a book on Bed Etiquette.

Ely for us was a few brief visits with friends and a quick look in at the Hotel Nevada where a quiet revolution is in progress. Bert Woywod’s eccentric Western Playland has been toned down since his departure — where are the Roy Rogers lunch pails? — but it hasn’t been utterly dismissed. The motorcycles are gone, but the fat papier-mâché chef is still standing guard at the cafe, and the big bronze sculpture of the buckaroo on his rearing 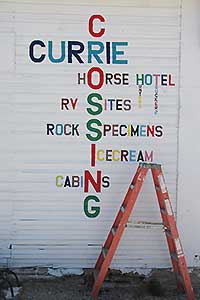 horse has only been moved from its prominent place at the entrance to a nearby corner. We didn’t have time to see the upgrades that are underway with the rooms, but the word we heard around town is quite positive about the new management group.

We were gratified to see that Dustin Anderson’s store at Currie is maintaining. Dustin himself was on vacation when we stopped in to wish him luck (we had covered his Grand Opening in NevadaGram #146), but progress continued in his absence in the form of a pleasingly eccentric sign being applied to the side of the building.

At Wells we turned west and took I-80 home. I will forgo a travelog since Shorty covers the same ground in his post card. Suffice it to say we visited friends along the way, and even celebrated a birthday at Ormachea’s in Winnemucca. As Shorty himself says so often, “Life is Good.” 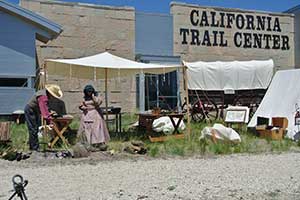 The Coalition to Regulate Marijuana Like Alcohol is busy collecting 101,667 signatures of registered Nevada voters to qualify the initiative to end marijuana prohibition here for the November 2016 ballot. To help achieve its goal, the campaign is posting “bathroom-themed ads” in the restrooms of bars and restaurants around Las Vegas. Wait, bathroom-themed ads to make marijuana legal? How does that make any sense? If you can’t make it to a bathroom in Las Vegas in time to see them for yourself — or as the Coalition suggests, to share them with your family far away — here they are . . .

Stan Paher’s Nevada Sesquicentennial book is in production, with Stan and Warren Lerude putting their snowy white heads together over the paste-up table at White Sage Studios in Virginia City . . . Carson City’s “Jazz and Beyond” music festival runs through August 17th at venues from the Governor’s Mansion to Comma Coffee. 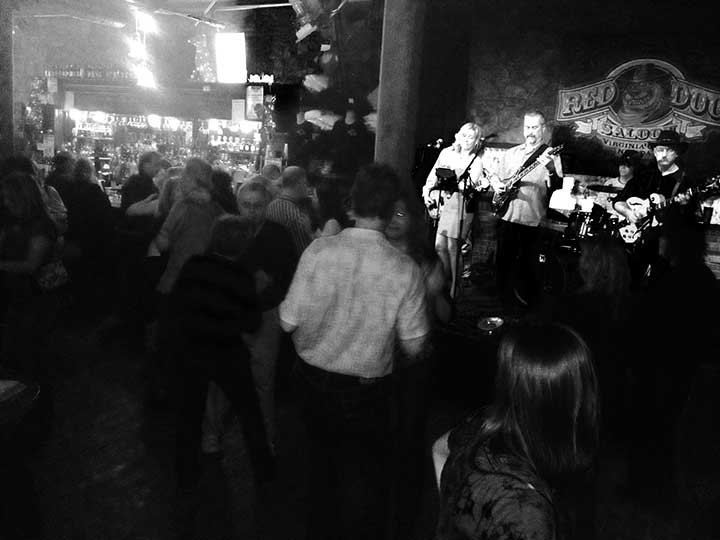 I took this shot from the sound booth during a performance of Lady and The Tramps. The band features Casey Allander on bass, Roger Haas on drums, Steve Carmac on flute and sax, Charlie Edsel on rhythm guitar, Glenn Buschine on lead guitar, Molly Malone on percussion and featuring all on vocals.

They are the closest thing we have to a house band, and a real crowd pleaser with their rockin’ blues, swing and outlaw-country style of covers that they do so well. They always have the crowd dancing all night and great group of friends and musicians to have around.