April’s great event for those of us non-metropolitans who strive to build Nevada Tourism, is Rural Round Up.

It is the annual gathering of folks from what we used to call the cow counties (whether they had cows or not) to network, workshop and brainstorm to devise new ways to present themselves favorably to the traveling public.

Last year the great event was held at the Hyatt Regency on Lake Tahoe’s north Shore. This year it was in Pahrump, that rambunctious burg an hour’s drive from Las Vegas on the other side of the Spring Mountains.

The Pahrump Nugget, host facility for the event, was bulging with people moving from workshops to general sessions and to workshops again, and it was left with stretch marks when the last bus pulled away.

The welcoming barbecue was burgers and dogs, and the music was disco. There were a handful of energetic dancers in the group who could really, really shake their booties, and they entertained the rest of us.

Actually, some of the others were entertaining too.

Lunch the next day was a buffet from which we carried our plates through a doorway just down the hall into the bowling alley.

Some of Nevada’s tourism elite embarrassed themselves by actually bowling — although here too there were impressive performances. Patrick Gilmore from Virginia

City seemed especially adept, and Allyson Freedland delivered a classic strike in which the pins go flying, all but one, which teeters and rocks for a loooong agonizing moment before it topples over. Yesss!

But the signature scene that remains in my mind from Rural Round Up 2013 took place in this same hallway, which leads off the casino floor past the poker room and the big bingo parlor to the meeting rooms, where it makes a right-hand turn to get to the bowling alley.

It’s not a particularly wide hallway, although it widens out after the turn, and Jack Sanders was set up in the narrow part with a long table from which he and three assistants were pouring tastes of the wine they make at the Sanders Family Winery. Right at the corner was the cash bar.

So at six o’clock when the corks

were popped and the tasting began, the hallway was jammed with people. Eventually they all had tastes, some more than one, and after priming their pumps with these thimblefuls of bottled sunshine, graduated to the bar for bigger glasses of lesser stuff. As they did, the wider part of the hallway at the entrance to the bowling alley slowly filled up with people from around the state happily babbling together.

I was a part of it, immersed in a conversation with a couple of guys about the nature of life, humanity and civilization, and back around the corner the corridor was still jam-packed at the tasting table. The hallway was buzzing like a hive full of bees.

Which is when the bowlers arrived for Thursday Night league play, two, three, four at a time, pulling little carts full of accouterments and pushing silently into the mass of chatter. The crowd of eagerly conversing wine tasters parted before the silent advance of the bowlers, and closed back up again behind them until the next little cluster came pushing through. This went on for a semi-surreal five minutes, so zany it could have come from Jacques Tati or the Marx Brothers.

This was only a counterpoint to the general sessions and workshops, which covered current topics of interest. The presenters got thumbs up all around. It was emphasized that they were not being paid, but donated their time, energy and expertise. In the case of Crystal Henrickson especially, it was a considerable contribution.

I was unable to stay for the Friday morning presentation of our new state slogan: “A World Within. A State Apart.” I’d like to have heard how they arrived at that. When I worked for NCOT back in the Dark Ages we adopted “Nevada’s Got It” for a slogan because it had worked so well in New Jersey. I know it inspired some disrespectful joking, but if it inspired anyone to visit I never heard about it.

I was flying solo in Pahrump, but earlier in the month Robin, Shorty and I spent a pleasant afternoon

in Carson Valley. This has been prime farm and ranch land since it was claimed by Mormon settlers in the 1850s but it’s still an interesting surprise to see how much agriculture contributes to tourism in the valley today.

For one thing, cows grazing in green pastures beneath the snow capped granite peaks of the Sierra make an indelible impression. This dreamy vision of pastoral plenty defines the Valley in the mind’s eye. And when we started looking around and asking questions, we found the makings of a pleasant day’s excursion devoted just to agriculture in the valley.

Make that visit in February and you can experience the Agri-tourist’s dream: Eagles and Agriculture. It’s a three-day celebration of wildlife and the ranching industry in Carson Valley, and takes place during the calving season when the eagles flock here to scavenge the placentas.

The opportunity to see these birds at their dinner up close is hugely popular with the bird people, and brings visitors from around the world. (Hint: reserve your place early, there were more than 400 participants last year, and the more popular events sell out fast)

There were more than 40 entries in this year’s Eagles & Agriculture photo contest and Merry Muller of Gardnerville won both first place awards. Her “Newborn Calf” image was the best in the Agriculture/Wildlife category and her “Calf and Eagle Playing” image was selected as the best Eagle image. She was there and I wasn’t but I’m not sure the eagle is playing. The calf maybe, but that eagle looks dead serious to me.

The Jacobs Family Berry Farm (1335 Centerville Lane, Gardnerville; 775-525-0450) is an enjoyable visit any time, but the berry harvest won’t begin until summer. 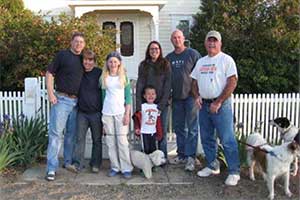 Once part of the Lampe Homestead, this 5-acre farm includes the house, barn, dairy, bunkhouse and several other outbuildings of the famous old property. They have planted both summer and fall bearing varieties of raspberries and blackberries, and they sell them here at the farm beginning in July. They pick berries each morning, July through September, to avoid the afternoon heat.

The Corley Ranch at 859 Highway 395 South, Gardnerville (775-265-3045) is a real working ranch raising cattle and farming hay and pumpkins, and a good deal more besides. The Cook Shack and Western Barn is a 19th century survivor, retrofitted to become a year-around venue for meetings, banquets and weddings for as many as a hundred guests.

Each year they grow over 30,000 pumpkins and carefully groom a 3-acre corn maze, open every October. That’s the time to come — you can harvest your own pumpkins and experience the incipient panic of being lost in a maze with a lot of other lost people.

Trimmer Outpost, 2276 Main Street Genoa (775) 782-2518 is open year-round as a provider of Valley-raised grass-fed beef and has a selection of other products — from gourmet foods to pottery from Planet X — as well. Like the other agri-tourist attractions in the Valley, Trimmer Outpost makes its facilities available for special events from barbecues and weddings to corporate events.

It’s also a participant in “Sweet Sippin’ Sundays”, a local promenade held the first Sunday of each month June thru October from 1 to 4 pm. For $12 participants buy a wine glass and troop around downtown Genoa refilling the glass here, there and almost everywhere.

There are other agriculture-based enterprises in the Valley — composting is done on an industrial scale here, and there are two coffee roasters in the Valley, one you’ve heard of and one you haven’t. The one you’ve heard of is Starbucks, and they have a roasting plant at the Minden airport. The one you haven’t heard of is Blind Dog Coffee, and the video explains the origins of the name and of the coffee.

Quick notes from beyond the mountains: Here’s a unique look at Piper’s Opera House in Virginia City . . . Sheriff Stone writes from Gold Point to wish us happy springtime and adds, “If you’re thinking of what to do Memorial Day Weekend (Friday – Sunday May 24th, 25th

& 26th), why not come to Gold Point for the weekend and let us do the cooking and entertaining while you spend the afternoon exploring the surrounding country. If you’re interested in a flier just write us back and request it. This year we have live entertainment on Friday and Saturday by Alkali Flats with their country and bluegrass music. They brag they are the best mediocre bar band on the Sacramento

River, and I believe them. Please let us know if you are planning on having some of our meals so we can be sure to have enough on hand . . . Check out this new website for Pahrump tourism. Very nice . . .

Overheard at the bar at Saddle West in Pahrump: “Ah, good taste, what a dreadful thing! Good taste and professionalism are the enemies of creativity.”