The struggle over pit mining in the Virginia City National Historic Landmark has shifted south through Devil’s Gate from Storey to Lyon County.

At last month’s scheduled hearing before the Lyon County Planning Commission, Comstock Mining Inc asked for a continuance, saying it hadn’t had time to prepare. This time company CEO Corrado De Gasperis delivered the applicant’s response to the Planning Commission Staff Report just 30 minutes prior to the meeting, giving no-one any time to prepare a reasoned response.

He was rebuked by two board members for introducing new and irrelevant material relating to the drawing of the town boundaries, materials requiring careful review, but allowing no time to do it. Commissioner Wahrenbrock mentioned CMI’s incompetence, Commission chairman Davies criticized Mr. De Gasperis’ manipulating and misleading the Planning Commissioners.

To a resident of Storey County like myself it was a stunning revelation. In Lyon County the commissioners tell the Staff what to do, not the other way around. They ask questions intending to form opinions, and they state opinions openly. Most startling of all: they protect their residents’ rights.

Whatever the reason, Mr. De Gasperis was noticibly off his game once again. Where he has so often met setbacks by rushing to spread Harmony, Good Will and Yes-Indeedy, he seemed hesitant, chastened and vague.

“I thought the staff would correct our presentation,” he said at one point. Board member Larry Wahrenbrock of Silver City responded: “You thought our Staff would do your job?”

“We decided not to rebut Staff because there are so many debatable points,” Mr. De Gasperis stated. “We are committed to proper planning, but we think some properties were wrongly excluded from the town limits.” The commissioners replied that the town boundaries are not important to the issue. “But blah blah blah,” Mr. De Gasperis said in a tired whine. “Bleat bleat.”

Besides the bankruptcy of his arguments, Mr. De Gasperis’s remarks emphasized that CMI isn’t really a mining company, it’s a real estate management firm, “one-third owned by Intergroup” he stated, and showed attractive scenes of apartment complexes from that company’s website. The thought that real estate manipulators like John V. Winfield or whoever he sells to might end up owning dense development rights in Silver City cast a further pall over the proceedings.

Erich Obermayr, Chairman of the Silver City Town Board, explained the town’s position, which is that granting the application would be a disaster for Silver City. “This is an effort to reinvent our town by outsiders,” he said, “which is neither wanted nor needed.”

John Marshall, the Comstock Residents Association attorney, spoke to the point that CMI shifted its ground in its new response to the Staff Report. He pointed out that CMI’s abandoning its first argument in favor of this new one was an admission that the staff had it right.

He reminded the Commissioners that their predecessors had consistently ruled that open pit mining was an incompatible near neighbor to the quiet town of Silver City.

When the video had been shown, the floor was opened to public comment. Speakers on behalf of Silver City wore a distinctive loop of red ribbon pinned to their lapels. Many of the speakers on behalf of the mining company wore new CMI caps and brown shirts.

There were so many speakers, in fact, that the meeting was recessed for lunch and Item 1 on the agenda didn’t conclude until after 2 pm with a 5-1 (1 absent) vote against the Master Plan Amendment and unanimous 6-0 against the Zoning change.

There are five commissioners on the Lyon County Board, and one of them was elected with help from the Intergroup Corporation, the real estate management company that Mr. De Gasperis claims owns a big piece of CMI. John V. Winfield, CMI’s Chairman of the Board, owns a big piece of Intergroup as well. He also controls Santa Fe Financial Corp and Portsmouth Square Inc. Each of those three California corporations contributed $2,500 to one Lyon County Commission candidate at the last election, and CMI contributed $10,000 on top of that for a total of $17,500 from John V. Winfield.

That candidate was elected; his name is Hastings.

I’ll be at Yerington on January 2, wearing the red ribbon. You should come too, extra ribbons will be available.

Overheard at Maynard Station in Gold Hill: “I have learned silence from chatterboxes, tolerance from bigots, and kindness from bullies; yet strange to say, I despised my teachers.”

Brief Notes from Beyond the Mountains — After months of refurbishing by local craftsman Mark Caylor and other volunteers, the Ely Art Bank at 399 Aultman Street has opened its doors. 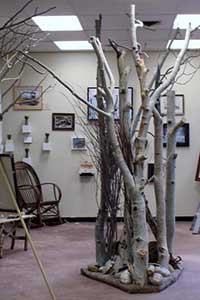 The building, once a busy downtown bank, is now a Gallery and Cultural Center with a permanent art collection of painting, sculptures, and photos that depict the Great Basin area and White Pine county. Local artists’ work is also on display and for sale.  The Art Bank is decorated for the holidays and will be open during the season . . . Another great way to unload some cash in Ely: The First National Bank of Ely has challenged the Nevada Northern Railway Museum to raise $25,000 by December 31. The Bank will match dollar for dollar every dollar raised up to $25,000. For more information on the First National Bank 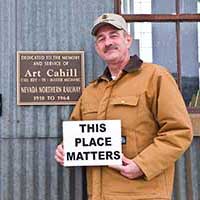 $25,000 Challenge Grant or to make a contribution or become a member, please contact the Nevada Northern Railway at (775) 289-2085 or stop by at 1100 Avenue A in Ely. See more here . . . Looking for a new perspective? The Stratosphere Casino, Hotel and Tower in Las Vegas gives Nevada residents a chance to see aerial views of Las Vegas for free Fridays through Sundays until January 31. This gives “On the house” a whole new dimension. Bring your driver’s license . . . 1862 is the restaurant at Walley’s Hot Springs Resort and Spa in Genoa, and the new winter menu is decidedly 19th century: rack of wild boar, pheasant breast, lobster ravioli, and buffalo short ribs . . . And in Minden, also in Carson Valley, the Flamingos appear at the Carson Valley Inn one night only, January 17 . . . Yes there are a few  — but only a few — tickets left for the ever-popular Cowboy Poetry Gathering in Elko . . . Here on the Comstock some Christmas decorations went up right after Halloween,

and in Las Vegas the Las Vegas Motor Speedway will add to the jolliness overload by keeping its elaborate LED Christmas light display twinkling and blinking through January 5th. It’s $15/car for the awesome drive-through ($13 if you bring s bag of “gently used” clothing to contribute to Goodwill)  . . . Nevada will celebrate its 150th birthday in the coming year. We’re on the edge of our seats waiting for the fun to begin, which it does in Fallon with a 5K Fun Run/Walk starting at 10 am on New Year’s Day. Festivities are scheduled all around the state throughout the year, including the ambitious Battle Born Birthday Cake Celebration in March, when a 1300-lb. birthday cake will be served in Carson City. It’s a re-creation of the cake made for the Centennial in 1964 . . . 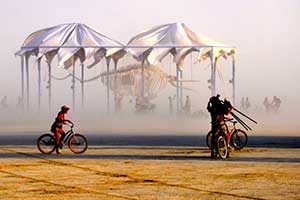 Our correspondent Kris Vagner’s own art team, The Pier Group, is in negotiation with the Terry Lee Wells Nevada Discovery Museum at 490 S. Center Street, downtown Reno, over a plan to install the group’s Ichthyosaur Puppet Project in the museum’s foyer. The Puppet is a 50-foot ichthyosaur skeleton marionette designed by Vagner’s fiance, Jerry Snyder, and made of shaped, laminated plywood. It was installed at Burning Man in 2013; installation at the museum is expected in early spring . . . 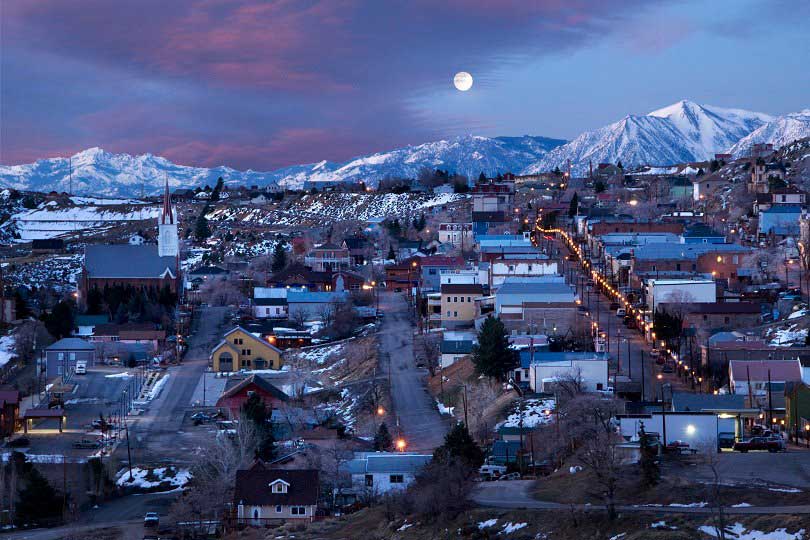 The moon was full. I hiked up Cedar Hill in the dark with a headlamp, to a place where you can see the peaks around lake Tahoe. I wanted to capture my favorite town in the twilight. I stumbled up the hill following deer and lion tracks to a spot where I waited for the sun. The town was shaded by an eastern knoll, but the dawn began to light the snow covered peaks in the distance, that were still bright from the beautiful moon. Gazing at the past, in the present, a wondrous sight! 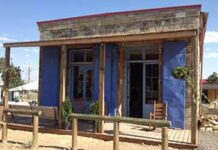