I’ve been away. Not physically away, but so fully engaged in the fight against pit mining the Virginia City National Historic Landmark that I might as well have been in a different world. You’ll find a brief update below.

Robin and I had been feeling the simple yearning to see some sagebrush, and some sky, and some of the people we’re especially fond of, when we received two irresistable invitations that brought us back out on the road again.

The first was an invitation to give a talk and a reading from the new book at Joe’s Tavern in Hawthorne as the second stop of my “Self Propelled Nevada Bookstorming Tour”. The tour began at the Tahoe House in Virginia City before an audience of about 40.

In Hawthorne we all sat at a table together and shared Joe Conforte stories. Everybody has one, if they were around when he was. No-one ever met Joe personally and then forgot about it afterward. Proprietor Hal Holder offered every amenity to enhance the occasion, and it was a special pleasure for me because it brought back memories of Joe and Julia Viani who reigned here for so many years.

It was also my experiment with innovation in the Author business: hold the readings/signings in saloons and kill two birds with one stone.

Then on to Tonopah for one of the best days of the year: August 27, 2011 and the Grand Re-Opening of the Mizpah Hotel.

To comprehend the significance of this day, think back over Tonopah’s long history of boom and bust. The great and glorious Mizpah, five stories of Edwardian elegance opened in 1908 with an electric elevator, a dial telephone

system connecting the rooms (some with private baths), and a commanding presence at the center of this rich mining city.

Tonopah peaked in the years leading up to World War I, and after that it was a long, slow downhill slide. The increasingly shabby Mizpah suffered through 50 years of hard times as the old city withered around it. It livened up briefly during World War II when the Air Base was busy training bomber crews, but this flicker of prosperity ended with the war.

In 1950 new owners erected the now familiar lights on the roof. The lobby was remodeled to accommodate a small casino and cocktail bar, but the economic tide still ran the wrong way. By the late ’60s an inside room (in which the window opened onto a corridor, rather than to the outside) rented for $2.50. With a bare bulb dangling from a frayed cord, and a swaybacked metal bed hugging the wall for support, these rooms were popular with cowboys sleeping off a payday Saturday night.

I stayed in one of those rooms in the late ’60s, when I was running and playing with the cowboys from Art Linkletter’s ranch down at Lida. Staying at the Mizpah is like meeting Joe Conforte, if it happens you don’t forget it, so lots of people have fond Mizpah memories.

One of them was a kid from Las Vegas who fell in love with the old place while traveling to a high school track meet. Nearly 40 years later, as the president of a multi-million dollar construction company and builder of the Union Plaza Hotel in downtown Las Vegas, he bought it. In 1979, after three years and $4 million, Frank Scott opened the old hotel as a glittering jewel box designed as a for high-rolling gamblers.

Scott’s dream of his remote “ghost town hotel” was trampled under the feet of commercial travelers hurrying to sell goods and services to the mines and the military in Tonopah. The subsequent collapse of the boom left the Mizpah with new owners surviving on the highway trade, and a succession of owners has since stripped the old structure of its fixtures, furniture and finery.

One thing was added: the legend of “the Lady in Red”, perpetuated in legend, song, brochure and website. It’s an improbable tale of a prostitute murdered upstairs . . . “It is said she still roams the hallways to this day, and sightings have often been accompanied by a single pearl left on a pillow or night stand.” [quoted from the Mizpah website]

I notice that Guy Rocha, when he refuted the numerous fictions and exaggerations that have passed for history of the Mizpah, leaves the Lady in Red unmentioned. He does, however, cram a lot of other legends into the confining realm of fact.

Legend says Wyatt Earp kept the saloon, but Rocha notes that Earp left Tonopah before the Mizpah was built. Legend says Jack Dempsey was a bouncer at the Mizpah, but Rocha points out that

Dempsey wrote in his 1960 autobiography, “I never was a saloon bouncer in my life.” Legend says Howard Hughes married Jean Peters at the Mizpah, but Rocha insists on telling us that they were actually married at the L & L Motel down the street. What’s the matter with this man?

Lots of those factual errors are included in it, but here’s an article about Tonopah and the Mizpah that novelist Herb Gold wrote with enthusiasm and flair for the New York Times travel section in 1982.

We even had a Lady in Red circulating through the crowd, wordlessly imploring each person whose eyes met hers, but at any attempt to speak to her she dissolved into a rosy vapor and was gone.

From being the home of Tonopah’s most famous ghost, the hotel became a ghost itself, haunting Tonopah’s gaunt downtown. It had been padlocked and dark for ten years when Fred and Nancy Cline bought it.

Fred and Nancy Cline are winemakers in the Carneros District of Sonoma County. Fred’s grandfather was named Jacuzzi, and Nancy’s grandmother had come west when her brother struck it rich in Goldfield. Harry Ramsey was heavily invested in the Goldfield mines, and sister Emma became Goldfield’s postmaster. The Clines have the personal resources and the personal resolve required to restore the Mizpah to health.

It is grandeur, serene, rich, understated. An elegant leftover from the gilded age, more Ramses II than Louis XIV, slightly old-fashioned but surprisingly glamorous and graceful still — like a favorite aunt, perhaps. 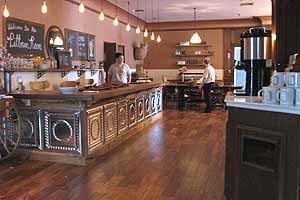 And like a favorite aunt, she’s got some nice surprises to share: the Key Pittman Room, adjacent to the Great Room, is the coffee shop, and the Jack Dempsey Room, down an incline into what is actually the building next door, is the gourmet dining room. It’s presided over by a chef imported from Las Vegas and a wine list that’s imported from California. The rooms and suites on the four upper floors are tastefully appointed to the first decade of the 20th century, and served by one of the first electric passenger elevators in the state, the original safety brake still in place beneath its oak-interiored cabin.

Surely this is the jewel box that Frank Scott dreamed of.

Governor Sandoval was present, and Richard Bryan, who served as Nevada Governor and as US Senator. They spoke glowingly of the Clines, the Mizpah and old Tonopah to the two hundred or so people gathered outside the hotel.

For all the ceremony, for all the poobahs and potentates who praised the day, for all the people gladly gathered outside the hotel where the governor and the Clines clacked the big ceremonial scissors for the photographers (while master of ceremonies Sandy Harmon sawed through the ribbon with an only slightly sharper pair), it was the crowd surging through the great open doors that brought the old icon back to life.

With no liquor license the Clines couldn’t sell drinks, so they gave them away, and the great room was soon filled with eager babble, dozens of enthusiastic conversations quilted together in a symphony of sound . . . the Mizpah was alive again!

Let’s keep it that way. Next time you make that Reno – Las Vegas trip (in either direction) treat yourself to a stop in Tonopah. See the Mizpah for yourself and spend another hour or two exploring the old city’s other attractions.

Quick notes from beyond the mountains: Here’s a very nice Ghost Town photo site, and you can turn down the volume on the banjo music . . . At the Nevada State Museum in Carson City from

10:30 am to noon and from 1 to 3 on September 30, Coin Press #1 will once more go into operation to demonstrate how coins were minted. Participants can then drive south on Carson Street to the Carson Station parking lot where a chicken wig cook-off is taking place from noon until 6 pm. More wings, music, arts and crafts on Saturday 10am – 8pm and Sunday 10am-6pm . . . Here’s a terrific information source for Nevada lovers . . . How long since you’ve been to Rhyolite? Too long, probably. Here’s a great ghost town story about Rhyolite that isn’t about the old days and doesn’t have to do with ghosts
. . .Speaking of which, the Carson City Ghost Walk is such a popular success that they’re off to an early start this year. The video at left is the best alternative to being there, but it can’t convey the feel of crisp fresh air on your cheek, the sense of anticipation or the pleasure of personal participation . . . Spring Mountain Ranch State Park, 15 miles west of Las Vegas via Charleston Boulevard within the Red Rock National Conservation Area celebrates Pioneer Day from 10 until 4 on September 25th; you can enjoy live music, spinning and weaving demonstrations, gold panning, black powder rifle shooting and candle dipping, along with authentic Dutch-oven cooking. It’s free to the public, but park entrance fees apply ($7 for Nevada residents, $9 for non-residents) . . . Here’s the State Parks calendar into 2012 . . .

The 103-mile Extreme starts at Kershaw-Ryan State Park, goes through Caliente and Pioche, three other state parks, then back to Kershaw-Ryan. There’s also a 38-mile Double Helix, from Kershaw-Ryan to Cathedral Gorge State Park and back, and a Family Fun Ride on the pavement through Kershaw-Ryan State Park . . . By the way, each Raley’s and Food Source store in Nevada donate 5 cents to the Nevada State Parks system when shoppers use any reusable grocery bag at checkout . . .

Overheard at Maynard Station in Gold Hill: “A cult is a religion with no political power.”