Let March Madness begin! March is the true beginning of the nicest weather in Las Vegas. During the month you can usually attend sports activities with moderate weather and slight chances of rain. The highs are normally right at 70 with lows in the upper 40’s.

For car racing enthusiasts, Nascar Weekend at the Las Vegas Motor Speedway starts off the month with a major event from Friday, March 4 through Sunday, March 6.  Tickets can be bought for single events or as a weekend package.  The Stratosphere Pole Day tickets on Friday start at $30. This is qualifying day for the Sunday race and practice day for the Saturday race, and it runs from 10 a.m. until approx. 5 p.m.  The Boyd Gaming 300 Nascar Xfinity Series is at 12:30 p.m. on Saturday and tickets start at $35.  The ticket gates open at 8 a.m.  The main event on Sunday is the Kobalt 400 at 11:30 a.m. with the gates opening at 7 a.m. and tickets starting at $60.  If you are really, really into racing you can purchase the Clubhouse Weekend Package for $899 per ticket (same price regardless of age), which covers racing plus the Neon Garage and Pit Road access for all 3 days.  It includes a VIP parking pass, beer, wine, soda, and water and food and snacks.

March Madness is always a huge event in Las Vegas, running from March 15th through March 20th.  The NCAA men’s college basketball tourney begins with the first four on Tuesday and Wednesday, with the first weekend elimination games Thursday through Saturday.  All of the sportsbooks on the strip and the local off-strip casinos will have all the games shown.  And the seating in the sportsbooks will start filling up at 5 a.m.!  So, make sure you get enough sleep the night before or you will lose out on a seat.  (You can always sleep in your chair in the sportsbook!)
The most hectic time during the tournament is the Thursday and Friday (3/17 and 3/18), so be prepared for high prices at all the hotels during this week and weekend.  And to make March Madness even more interesting, Thursday, March 17th is St. Patrick’s Day.  You will have to wear the Luck of the Irish and green to win some of those bets and take home the gold!

For all the Chicago and New York baseball fans out there the Cubs and the Mets will be at Cashman Field, Las Vegas Home of the 51s , for the Big League Weekend on Friday, 3/31 at 5:05 p.m. and Saturday, 4/1 at 1:05 p.m. Tickets are still available for both games and go from $40 to $50 each.  It’s nice to be able to be up close and personal with the teams, since you feel like you are right on the field compared to the actual stadiums in both their towns. Just remember the sun block and hats if you go for the Saturday game afternoon game.

Diamond Jack has found a new second home, as sophistication and elegance of old Las Vegas (that’s me) has returned with the new LAVO Casino Club. This modern gaming experience fuses Blackjack table games (Roulette, Baccarat and Craps to be added) with VIP bottle service and award-winning Italian cuisine.

“LAVO Casino Club provides an avant-garde take on the glamorous history of gambling that’s never been done before on the Strip,” said George Markantonis, president and chief operating officer of The Venetian, The Palazzo and Sands Expo. “Guests can enjoy a DJ and dancing, along with amenities not offered in typical nightclubs or on the casino floor. Among them are classic premium cocktails served from a butler’s cart direct to the gaming table.  Also, groups can reserve a gaming table to sit together and play.”

And since Las Vegas is all about experimentation, welcome to The Linq Hotel and 3535, the city’s only infusion bar. There are 35 custom-made infusions used to make some very unique cocktails such as Chocolate Chai Peanut Butter Martini, Mint Oreo Martini rimmed with crushed Oreo cookies, Espresso Bourbon, and Pig Newton with fig-infused Jack Daniels Honey rimmed with a bacon salt mix. The experimentation continues with a colorful vortex LED fixture that spans the bar from floor to ceiling and mimics the larger version on the exterior of the building. The bar includes USB and electrical outlets and six VIP booths, each with two televisions. 3535 at the Linq Hotel is open daily 10 a.m.-4 a.m. 702-794-3366

Not new is Caesars Palace. It is 50 years old this year and a celebration is underway with the reimagining of the hotel’s original Roman Tower which opened Aug. 5, 1966. It is now the 587-room Julius Tower. The $7-million renovation includes guest rooms with 55″ TVs, luxurious Beautyrest Bouvet Island mattresses, and Gilchrist & Soames in-room toiletries and amenities. The focal point of each room is a custom-upholstered headboard incorporating bronzed framed mirror panels adding sparkle and reflection to the space.  Diamond Jack is looking forward to several nights in the new tower to compare with memories of many evenings in the old tower. Hail Caesar!

For the first time in nearly a decade, the Bellagio Gallery of Fine Art (BGFA) will feature a photography exhibit when it unveils “Yousuf Karsh: Icons of the 20th Century” on March 18. Recognized as one of thegreatest portrait photographers of the 20th century, Karsh’s work showcases some of the most notable men and women in Hollywood, the arts, sports and politics. The exhibit will run through Sept. 5 and highlight 60 portraits ranging from Winston Churchill and Pablo Picasso to Muhammad Ali and Grace Kelly. The audio tour included with admission will guide guests.Throughout his lifetime, Karsh produced more than 50,000 original prints, some of which were portraits of distinguished historic figures.

Ron’s Steakhouse is a Hidden Gem in Local Neighborhood

Ron’s Steakhouse at Arizona Charlie’s on Decatur is five years old now and located just off the casino floor. You may not be familiar with this restaurant but it’s worth jotting it down for a grand evening out any night except Monday or Tuesday when it’s closed. It’s actually fine dining at reasonable prices and a 10 percent discount is offered with ace | PLAY™ card because Arizona Charlie’s caters to its players. Also, players can use points and/or comp dollars to pay for their meal. 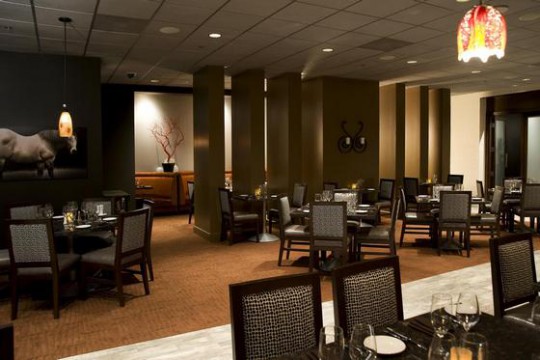 lighting. Our experienced waiter had fine dining experience from working in Europe and on the Strip. The meal started with an overflowing bread basket that included divine walnut-raisin bread as one option accompanied by a trio of butters – regular, timid herb and addictive cinnamon. Meals include soup or salad and good size entrée portions.

If only visitors on the Strip knew about this restaurant, they’d be paying a visit. Ron’s Steakhouse justifiably is the winner of six Open Table Diners’ Choice Awards including: Best Overall; Best Food; and Neighborhood Gem.

Jewel Nightclub at Aria will Open May 19

Jewell Nightclub at ARIA is set to open Thursday, May 19. The 24,000-square-foot, dual-level nightlife destination will house nearly 2,000 guests within two intimate spaces, the main club and a mezzanine level with five exclusive VIP skyboxes. Evoking a sense of glamour, guests will be greeted through a series of tall, mirrored doors intricately shaped to form a sleek reflective wall when closed.

In the main club, more than 1,400 square feet of distinctive LED ribbons will crown the action as JEWEL’s circular dome ceiling will form the centerpiece. Oversized wood and granite VIP banquettes, quilted in rich burgundy leather upholstery will be tiered and surrounding the dance floor. The DJ booth will have a wall adorned with dual-sided LED video screens and state-of-the-art effects lighting.

A commanding staircase bathed in LED screens will lead guests to the mezzanine level, with a view of the dance floor, a stunning bar, dance floor and five “themed” VIP skybox suites: The Blind Tiger, The Studio, The G.O.A.T., The Prestige, and The Gallery. VIP patrons will enter through a tunnel of arched bronze portals.