The calm before the explosions

Ramping up to the explosive month of July, it’s nice to calm things down a bit, relaxing at events that you would not normally attend. You can catch the pool league championships at Bally’s, dress up in comical costumes or be a pawn at the chess festival. So, take that rest before July and summertime activities hit! 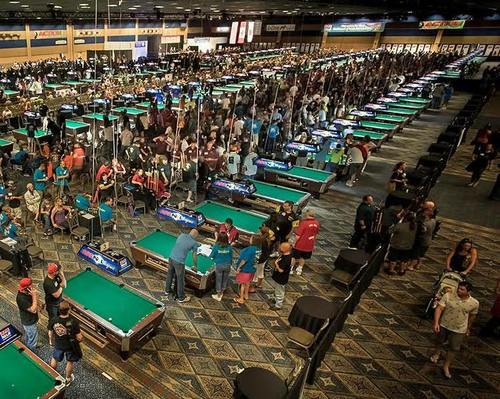 The Valley National 8-Ball League is holding the 37th annual VNEA World Pool Championships at Bally’s through June 3th. The competition started May 25th and is one of the world’s largest pool leagues for more than 100,000 amateurs. There are team competitions with skill levels of sports, redemption, resurrection, intermediate and masters, mini-tournaments and a hard luck competition. This is your chance to see a great amount of pool playing in one location. They are splitting the 300 tables into two giant ballrooms for the competitions. The events begin at 9 a.m. each day. 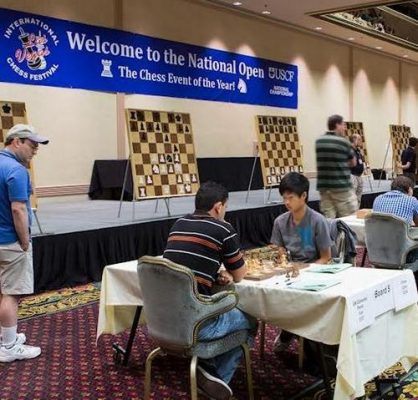 The Westgate Resort and Casino on Paradise is hosting the Las Vegas International Chess Festival June 14 through 18. As of mid-May, a total of 407 players have signed up for the various tournaments with a prize fund of $100k. Obviously, chess is not normally a spectator sport; however, it is good to try viewing something different while perusing the chess gift shop and, maybe, listening to a few speakers on the game. Eventually, this could be a televised event.

June 23rd is the beginning of the Amazing Las Vegas Comic Con  being held at the Las Vegas Convention Center on Paradise Rd. The hours are 3 p.m. until 8 p.m. on Friday. The event opens at 10 a.m. for both Saturday and Sunday,  ending at 8:30 p.m. Saturday and 6 p.m. on Sunday. The event is in Hall N1. There is a costume parade after the convention closes on Saturday night in the Main Theatre Room, which lasts until around 8:30 p.m.

There are several packages available for entry; however, the general admission base price for Friday and Sunday is $25 for those over 10 years of age. On Saturday the price is increased to $35. A 3-day admission is $60. The 3-day pass includes express registration taking you to the VIP counter for your badge, wrist band and bag. Note: There could be additional fees added to these prices. 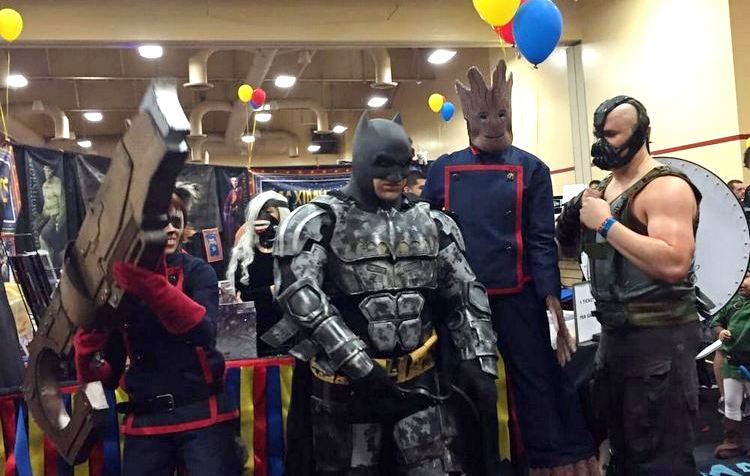 There are also packages which can include merchandise, autographed items, passes and exclusive comics. These can run from $50 to $175 per person to include the swag. Keep in mind that if you purchase any of the VIP or Premium packages you will still need to purchase a general admission ticket!  And, you might even get to meet Stan Lee!

The Cannery is hosting their 14th Annual Blues, Brews & BBQ Festival on Saturday, June 24th, starting at 4 p.m. You can purchase tickets in advance or at the door.  General admission is $13.75 (if purchased in advance includes fees) for ages 5 and up.  (Advertisements are showing $10 at the door.)  Those over the age of 21 can purchase their unlimited beer sampler wristband for $20 which is available at the door only.

This is a fun annual event with several BBQ restaurants and blues bands participating in an indoor/outdoor setting. The event runs until approximately 10:30 p.m. and is rain or shine. Trust me, if it rains in June you will be happy!

Not everyone got to see the Beatles live. Diamond Jack did. Yes, it was a long time ago, but I still have that wonderful memory which always comes back to me whenever I hear “Can’t Buy Me Love.” For those of you who never got to see John, Paul, George and Ringo live, the next best thing is The Fab Four. They are appearing at The Orleans Showroom on June 10-11 in a show titled the “Ultimate Tribute with Ed Sullivan” hosted by Ed Sullivan impressionist Jerry Hoban. Hear such hits as “Yesterday,” “Hey Jude,” “A Day In The Life,” “Twist And Shout,” and “Here Comes The Sun” from the group that has paid tribute to The Beatles for over two decades and who best replicate the band’s iconic style and legendary sounds. Join Diamond Jack and return to Beatlemania. Call 800-745-3000 or visit the Orleans Showroom webpage for tickets and information. 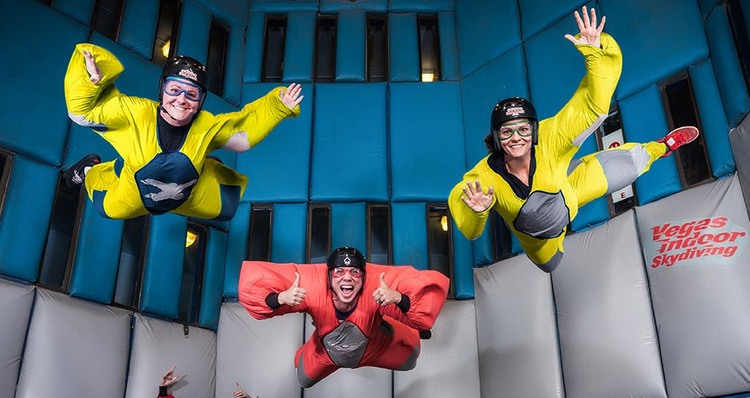 For some of you, The Beatles are so yesterday, and you need something more today and much more exciting. My suggestion is Vegas Indoor Skydiving, the first indoor skydiving facility to open in the United States (1982). No experience is necessary. Anyone of any age can participate and experience body flight during a simulated skydive experience without the use of an airplane or parachute. The experience is similar to the free-fall aspect of skydiving with the addition of a mesh trampoline floor and foam-padded walls. The wind tunnel itself is 12 feet wide and 22 feet tall, and yes, with some practice, you can go all the way to the top. Been there, done that. The machine is powered by a 1,000 horsepower electric motor attached to the propeller from a DC-4 airplane. Vegas Indoor Skydiving opens daily at 9:45 a.m. Reservations are mandatory. Call 702-731-4768 or visit the website vegasindoorskydiving.com.

The oldest computer can be traced back to Adam and Eve. It was an Apple, but with extremely limited memory. Just 1 byte … then everything crashed!

The inaugural three-day Mecum Las Vegas Motorcycle June Auction featuring hundreds of antique, vintage and collectible motorcycles on the auction block will take place June 1-3 indoors at South Point. Three fabulous collections will be the highlight along with consignments expected from across the country.

In addition, the first-ever “Legends of Racing” Preview Party will be held Thursday, June 1 from 5 to 7 p.m. with Q&A sessions with three legendary racers Don Castro, Gene Romero and Jay Springsteen.

Advance general admission tickets online are $20 per day, and $30 at the door and online once the auction begins. Doors will open daily at 8 a.m., with a preview from 9 a.m. to 7 p.m. on Thursday, June 1. The auction will begin at 9 a.m. on Friday and Saturday, June 2-3. Portions of the event will be broadcast on NBC Sports Network, and a live stream of the entire auction will be presented at Mecum.com. 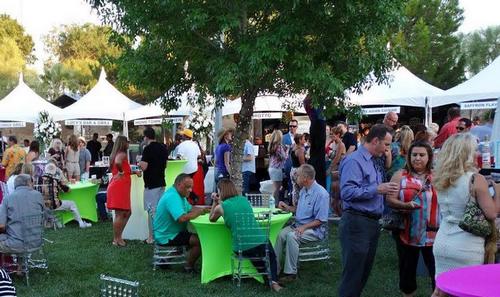 The Las Vegas Natural History Museum’s annual summer soiree, Sundown in Downtown: Bones and Booze, returns on Friday, June 2 from 6 to 10 p.m. The public outdoor celebration is held at Heritage Park next to the museum featuring bold rhythms, cold drinks and small bites from local businesses throughout the valley. Proceeds benefit the museum’s mission to inspire individuals through educational exhibits and programs to gain a better understanding and appreciation of the natural world. Tickets start at $35, which includes all you can eat via food vendors and two drink tickets, and VIP is $55. Guests must be 21 years of age.

The Lake Las Vegas Art Galleries will unveil its 2017 summer juried art show, Casting Shadows, on Friday, June 9 from 7-9 p.m. Original work by Nevada artists will be featured in its North Gallery. The free opening night reception will feature live music and hors d’oeuvres from a celebrity chef.

This hands-on interactive Zoom into Nano is happening at the Discovery Children’s Museum through Sept. 4. The exhibit, designed for ages 8-13, focuses on how engineers and scientists create new materials and technologies using things on the nanoscale too small to see like atoms. 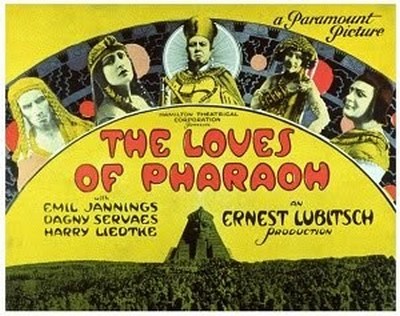 The City of Henderson has been offering Charlie Chaplin silent movies paired with live orchestral music as an annual event for several years. The featured film this year accompanied by the Henderson Symphony Orchestra will be Ernst Lubitsch’s “The Loves of Pharaoh” presented at the Henderson Pavilion at 8 p.m. on June 9. Tickets are $15.

“The Loves of Pharaoh” is a historical spectacle set in Egypt featuring lavish backdrops and costumes and a cast of thousands. The 1922 cinema masterpiece is a German silent film credited with transforming Lubitsch into a worldwide box office force. It stars Emil Jannings, the first actor to win an Academy Award for best actor, and is touted for having one of the best original movie scores of the silent era.