In Las Vegas, It’s That Time of Year for … Exercise! 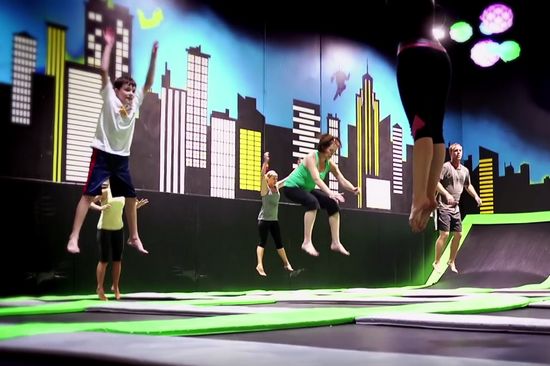 Sure, you could go to the fitness centers in Las Vegas in January and do the normal treadmill, step-walker, row-boat, jog around the building, pulse pumping, weight loss routines, or you can add some excitement with heart-stopping exercise that will keep you off the exercise treadmill for at least the next month!

Start with Gravady, billed as an “Extreme Air Sports” facility, has a trampoline park and includes tire swings, rope bridge, rock wall, a rope forest, and much more.  It is located in the Summerlin area on Tenaya Way between Cheyenne Avenue and Smoke Ranch Road. This is a very family-friendly place, so be forewarned — there are kids everywhere! They charge $13 for 1 hour and $20 for 2 hours for those age 7 and older and are open from 9 until 10 a.m. for those aged 6 and under and from 10 a.m. until 9 p.m. for all ages. You will either have to pay $4 for their grip socks or go barefoot. The best time to go for those over the age of 15 is from 9 p.m. until midnight on Fridays and Saturdays for Club Gravady when they pump up the music and turn on the lasers and black lights. They are closed on Sunday.

Shine Alternative Fitness was started by Cirque du Soleil performers. The classes are for those over the age of 18 who want to develop skills in using aerial silks, dance, anti-gravity yoga and balancing techniques to tone and strengthen the body as an alternative fitness routine. They also have zumba, pole fitness and xtreme boxing classes available from beginner to intermediate. They are located inside the Loftworks complex at Sunset and Tenaya Way and are open 7 days a week. Check out their website because class times and prices vary. 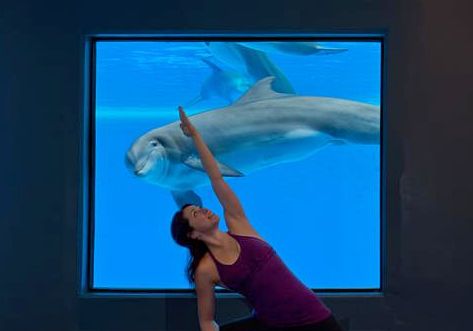 Yoga Among the Dolphins! That’s right, the Mirage Spa offers yoga classes Friday through Sunday at 8:30 a.m. for 1 hour in an underwater room of the Dolphin Habitat where you view the dolphins while stretching your way to fitness. The class is $50 and is limited to around 10 people.  You must call in advance, (702) 791-7472, to make a reservation. This price includes a day pass for the fitness center, lockers, yoga mat and a smoothie drink after your session.  A great price to pay to be up close to the dolphins and enjoy the other amenities of the fitness and spa area. 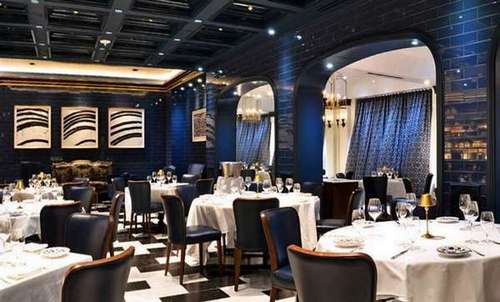 Restaurants opening on the Strip are more than just a place to eat. For instance, Carbone, that notable Italian-American dining hotspot from Greenwich Village in New York City opened at the Aria, and even though the celebrated menu from Chef Mario Carbone is unique and exquisite, just as unique and exquisite is the modern art display in the dining rooms. The collection features modern American artwork from Sol LeWitt and Richard Serra, colorful canvases by Ben Schonzeit and Robert De Niro, Sr., and intriguing pieces from Julian Schnabel, Maya Lin and Claes Oldenburg.

And the food? Guests can look forward to all the indulgent dishes and showmanship that is Carbone, as it defies casual by elevating Italian-American cuisine to fine dining. Among the favorites are Carbone’s famous Spicy Rigatoni Vodka, Veal Parmesan, Lobster Fra Diavola and the house Meatballs. The menu will evolve with dishes exclusive to the Las Vegas location.

Elevated Italian also means that every table deserves a Captain, a.k.a. waiter. Each was hand selected by the Carbone family to ensure the caliber of service synonymous with the restaurant, including the spectacle that comes with some of the restaurant’s famed tableside presentations.

And beyond Carbone is Casa Fuente, Las Vegas’ premier cigar lounge. It made history by becoming the first drinking establishment in North America to acquire a private barrel of rare Asian whisky.  It secured a barrel of 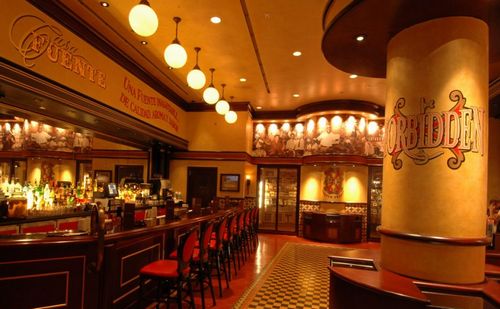 Kavalan Solist Vinho Barrique Taiwanese whisky, which was voted “World’s Best Single Malt Whisky” at the 2015 World Whiskies Awards. Casa Fuente now has 489 individually-numbered bottles available for purchase at $165 per bottle. The whisky, with an ABV of 56.3%, matured in an aged Spanish Oloroso Sherry Cask for five years and seven months.

“We’re always in the market to offer unique and special experiences,” said Michael Frey, proprietor of Casa Fuente. “When the opportunity came along to be the first in the United States to purchase a barrel of the world’s number-one whisky, we grabbed it. Let me add that the whiskey is very robust, yet pairs well with Arturo Fuente cigars.” 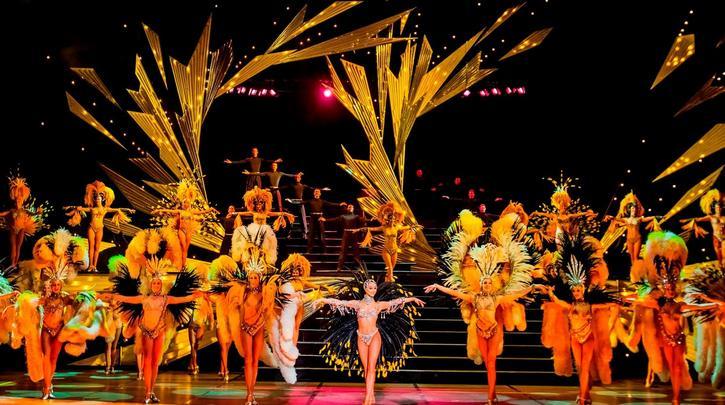 Maybe it was bound to happen, but it’s sad to know the longest-running show on the Las Vegas Strip — “Jubilee!” — is closing on Feb. 11, 2016. Ironically, the show’s co-creator and associate producer, Fluff LeCoque, died recently at age 92, before knowing the 34-year-old show was closing. “Jubilee!” is a real slice of Las Vegas’ entertainment history, being the last classic revue with topless showgirls covered in feathers and rhinestones, a cast of nearly 70 singers, dancers and specialty acts, glitz, glamour, and costumes galore maintained by a wardrobe department staffed by 26 people.

In honor of Jubilee’s legacy, tickets to performances from Saturday, Jan. 2 through Thursday, Feb. 11, 2016, (excluding Saturdays) will be available starting at $34. With the show closing, it will also mean the end of the wonderful public Jubilee! Backstage Tours that run every Tuesday, Wednesday and Thursday at 4 p.m. Tickets are $19.75 or $14.75 with a “Jubilee!” show ticket. This tour is highly recommended.

Disney on Ice Will Pesent ‘Frozen’ at Thomas & Mack Center 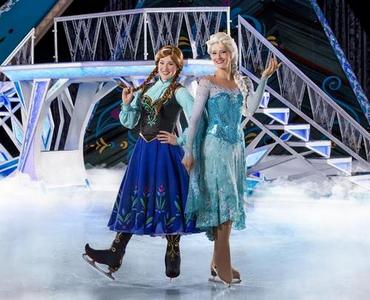 Disney On Ice presents “Frozen” presented by Stonyfield YoKids Organic Yogurt at the Thomas & Mack Center, Jan. 6-11, 2016. The show will be hosted by Mickey Mouse and Minnie Mouse, with special guest appearances by lovable Disney princesses and characters.

Naturally, the show will magically whisk the audience away to the wintry world of Arendelle, with special effects, skating and songs including “Let It Go.” Royal sisters Elsa and Anna will be joined by the snowman Olaf, his loyal reindeer Kristoff, plus Sven and the mystical trolls, as they journey to discover true love is the most magical power of all.

Tickets range from $35 to $80 for VIP. There are daytime and early evening show times available.

Minus 5 Icebar Will Debut New Look at Mandalay Place Location

Minus5 Ice Bar, the company that launched America’s first ice bar seven years ago, will reveal a newly renovated venue at The Shoppes at Mandalay Place with 100 percent new material and a frosty wonderland that is double its original size. In early 2016, the revamped location will feature more than 120 tons of fresh Canadian ice and a 1,300-square-foot ice bar, making it the largest permanent ice bar in the world. The museum-quality carvings will feature an eclectic mix of replica-inspired sculptures such as the Las Vegas Skyline and the Iron Throne from HBO’s Game of Thrones.

The adjacent Ice Lounge will also offer a new look in a larger 3,000-square-foot space seating up to 500 guests with a 20-seat bar and two private rooms that accommodate up to 80 guests each.

Hong Kong Cafe is Now Open at the Palazzo

Located on the casino floor at The Palazzo®, the Hong Kong Café is now open featuring a dynamic fusion of Asian cuisine and Western fare and serving lunch, dinner and late night dishes from 11 a.m. until 1 a.m. and 3 a.m. on Friday and Saturday. The 4,200-square-foot restaurant seats 155 guests and features an extensive selection of wine and beer, plus signature sake cocktails.

The intimate space with an abstract design strays from customary colors associated with Asian dining and instead highlights joyful colors with references to nature. Upon entering there is a brass display in the form of a bird cage and bamboo flooring that is fashioned to resemble chopsticks. The space is adorned with colorful banquettes stitched together to create a “kimono” effect.

Chef To, who is also executive chef at the resort’s exclusive Paiza Club, has 35 years of experience cooking Asian cuisine.  Originally from Hong Kong,  he specializes in Cantonese and Szechuan styles and is considered a dim sum master.