Bows and arrows, unicorns and the Year of the Dog: why not spend February in Las Vegas? 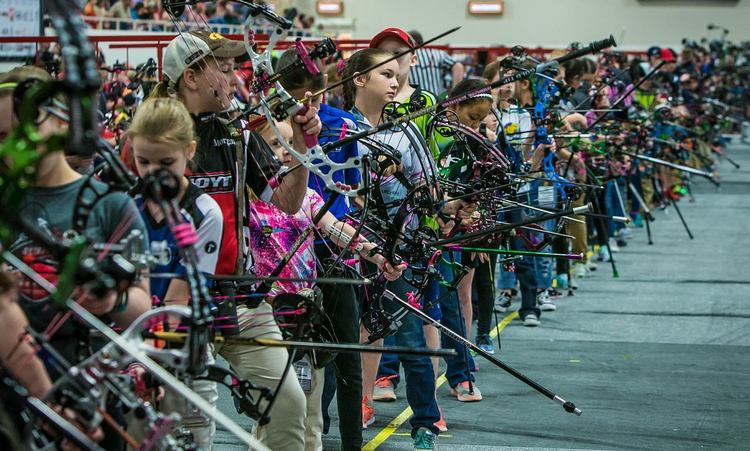 For the seventh year, South Point Hotel & Casino is holding the National Field Archery Association’s (NFAAF) Vegas Shoot.  This is the largest indoor archery tournament in the World, with last years’ payout of $403,000 in cash and scholarships to 3,000 archers.

While entrance fees for participants run from $100 to $500, the public has free admission to the events and trade show which runs from February 9th through 11th.  This event will be held at the South Point through the year 2020 since the signing of their agreement with NFAAF.

If you are interesting in trying your hand at archery after witnessing the competition, Impact Archery on Dean Martin between Tropicana and Sunset has an indoor range and rents bows for $15 and charges $10 an hour for range time.  They also have private lessons for $45.

Nevada’s largest film festival, the Dam Short Film Festival, will take place from February 8th through 11th at the Boulder Theatre in Boulder City.  This is their 14th Annual event showing over 120 of the highest-quality short films. 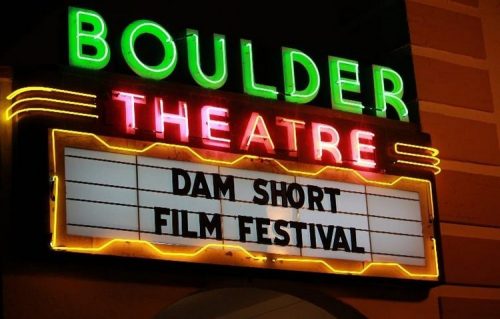 A 4-day pass is $100 and includes all events, screenings and parties.  The Awards Gala Party will be held at the Forge Social House at 553 California Ave. on Sunday night.  They also have bundle tickets for each day which encompasses a full day of programming for $35 each.  Thursday, Friday and Saturday there are 6 programs showing and Sunday has 5 programs.  All programs begin at noon.

Other social events are the Filmmaker meet and greet at the Boulder Dam Hotel and the 14th Dam Year Mixer at Boulder Dam Brewing Company. 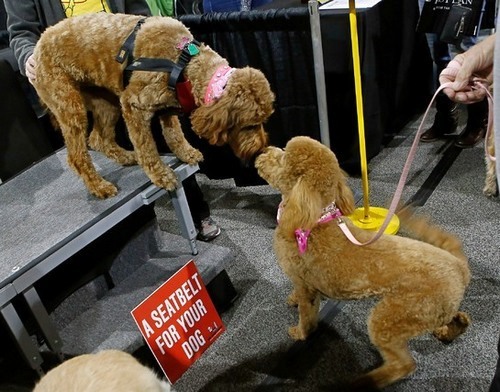 As the Chinese celebrate the Year of the Dog for 2018, the World Market Pavilions are presenting the 7th Annual Vegas Pet Expo on February 10th from 10 a.m. until 5 p.m. and on the 11th from 11 a.m. until 4 p.m. This was a free event up until this year.  The prices are now being charged to allow rescues and shelters to participate in the event for free, helping these worthy causes.

World Market Pavilions is located at the corner of Grand Central Parkway and Bonneville Avenue.  Tickets are $5 (18+ yrs.), $3 (5-17 yrs.) and free (under 5 yrs.) if bought in advance through this link: VegasPetExpo.com/admission.  At the door tickets are $8, $5 and free, respectively.  They also offer 2-day passes if you are interested.

They encourage you to bring your pets provided they are on a fixed lead or in a carrier and you have age-appropriate vaccination proof.  Their motto is “Play.Shop.Learn.Adopt”.  They will have giveaways, prizes and pet costume contests, free nail trimming, discounted vaccinations and microchipping.  You can also shop for pet products from over 100 exhibitors and learn about and adopt dogs, cats, birds, reptiles and other furry friends from dozens of adoption agencies and rescue shelters. 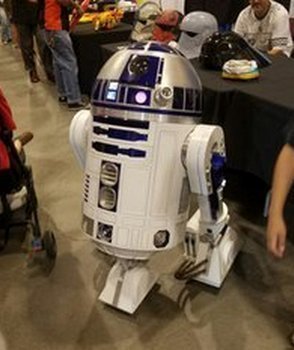 Toyland, toyland … Circus Circus is hosting Toycon.  From Friday, February 23rd through Sunday, February 25th you can see the latest and, probably, oldest collection of collectible toys in one place.  They will have 2 floors of retro, new and cool and something for everyone with die-cast cars, vintage dolls, comic book artists, celebrities with meet and greets for autographs and cosplay contests.  In previous years they have had the full-size Batmobile, DeLorean and police car from the Blues Brothers movie along with other famous vehicles.

General admission tickets are $10 for Friday and $15 for each day, Saturday or Sunday.  A 3-day ticket is $25.  They will have photo ops with some of the celebrities for an additional charge, or, you can purchase the VIP pass for $150 which includes 3-day admission, an autograph or photo with the convention guest of each day, a lounge pass, dinner on Friday night and Saturday night with an exclusive toy each night, a collector badge and lanyard.

Downtown is having The Color Run on Saturday, February 24th.  Also known as the Happiest 5k on the Plant, the race is 5 kilometer, un-timed and a color-blast!  This event is held all over the country and is all about having fun, meeting new people and being showered with 100% natural and safe colors.  So, put on your white shirt, join the pre-race party with music, warmup dancing/stretching and giveaways and run through the spray gauntlets at each 1k mile marker.  And, stay for the post-party which will have more colors, more friends to meet and more music and dancing! 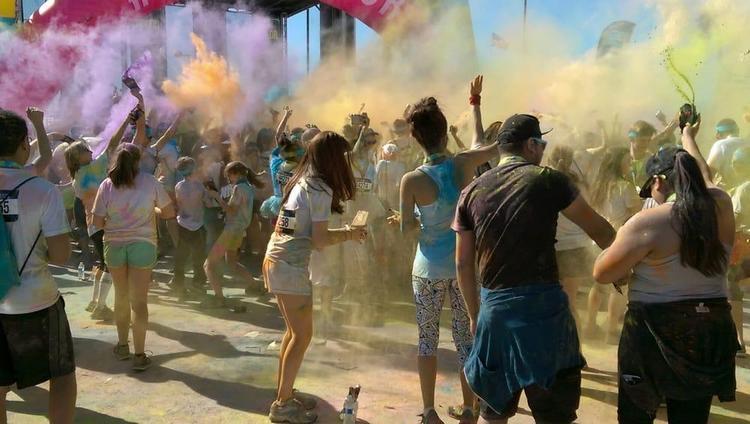 Things to keep in mind – you can pick up your kit the day before the race at the Downtown Container Park from noon until 6 p.m.  If you want to preserve the t-shirt you just received wear your own plain white t-shirt or a logoed shirt from where you work, etc.  Head to toe you will be covered in colors.  A lot of people wear hats, bandanas, long socks and tutus.  You might even see a few unicorn costumes!

Also, this is a major infiltration of particles into your sinuses, mouth and lungs.  You might want to take a surgical type mask (you can buy a pack of 10 from Walgreens) to save yourself from coughing and sneezing.

The Bacchanal Buffet & The Westin Hotel 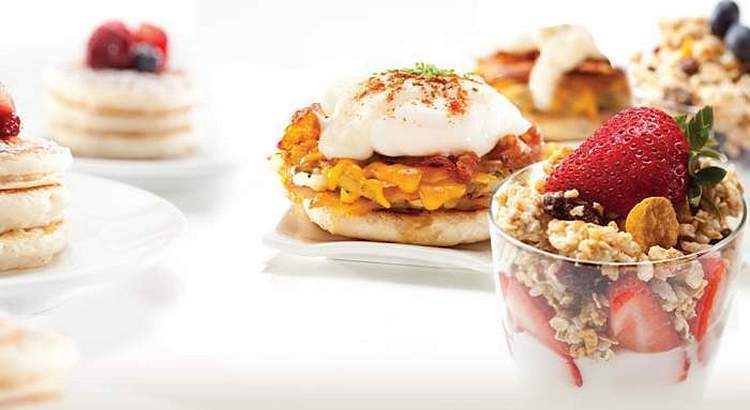 The Bacchanal Buffet at Caesars Palace is not your grandfather’s buffet. Your grandfather ate plates of baked chicken with peas and carrots and jello. The Bacchanal, voted the “number one buffet in the country” by the New York Post last year, serves truffle deviled eggs, avocado toast, wagyu beef and dim sum. Where other buffets serve breakfast, lunch and dinner at specific times, Bacchanal starts at 7:30 a.m. with a host of unique breakfast items including freshly-squeezed specialty juices (cucumber, carrot, watermelon), prime rib and shrimp. Brian Mongeon, buffet general manager, oversees the modern food attraction that serves some 4,000 guests a day.

“It’s almost impossible to taste everything in the buffet as that would take about six hours of straight eating,” said Mongeon. “My advice is to experiment, meaning try the roasted baby quail or frog lets instead of mashed potatoes. It’s true that our mashed potatoes are delicious, but I like it when people get away from their comfort zone and discover something new.”

The buffet’s executive chef, Leticia Nunez, is in charge of nine chefs and 124 cooks who keep busy preparing some 300 food items daily. The most popular are smoked beef brisket, the iced seafood displays and everything at the Asian station (noodles, sushi, stir fry). Other popular items are char-grilled lamb t-bones, Osso Buco, street tacos, Mediterranean hummus and baba ghanoush, risotto, and small plates of bone marrow with wild mushrooms. The center dessert station is a colorful display of cookies, gelato, and made-to-order dessert crepes and chocolate lava cakes.

A few suggestions from Diamond Jack: Avoid long lines by paying a little extra for an express pass. Crab legs are served after 3 p.m. on weekdays and all day on weekends. Ask about unlimited mimosas and other cocktails with a drink upgrade. Bacchanal Buffet or 702-731-7928. 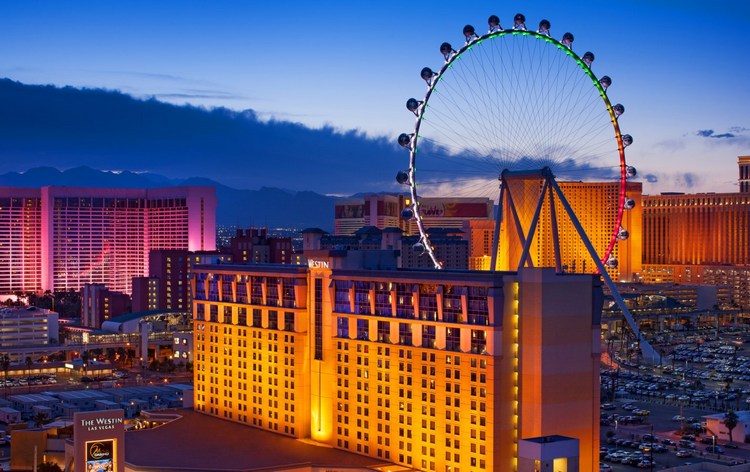 Looking for an alternative to the typical casino property? The Westin Hotel, on Flamingo just east of the Strip, has completed a major renovation to become a non-gaming and non-smoking hotel. The casino floor was removed and is now Jake & Eli, an original restaurant and lobby bar concept with four new meeting rooms. A décor featuring exposed brick walls, industrial chandeliers, high-top seating and plush booths creates a contemporary setting, perfect for business and leisure travelers alike. WestinVegas.com or 866-837-4215.

The Mesquite 2018 Music Fest will feature three stage shows Feb. 5-7 at the CasaBlanca Resort starring Bobby Brooks Wilson, America’s Diamond, and Flower Power Time Machine in Mesquite, Nevada. Tickets start at $25 while advanced VIP tickets are $30. A General Admission Super Package for all three shows is $69 if purchased before Feb. 5. A VIP Super Package, which includes one VIP Reserved Table seat for all three shows, is available for $84.

Bobby Brooks Wilson with a full live band will kick off the festival on Feb. 5 with his Tribute to the Motown Years, which celebrates his father and legendary soul rhythm and blues artist, Jackie Wilson.

America’s Diamond is a Tribute to Neil Diamond starring Jay White on Tuesday, Feb. 6 at 7:30 p.m. White has more than 25 years in the business. He’s done 9,000 shows in five countries and made one movie appearance with the real Neil Diamond.

On Wednesday, Feb. 7, Flower Power Time Machine will take you back to the grooviest decade with a full live production of 35 songs from the ’60s featuring songs from The Beatles, the Airplane, Janis Joplin, Three Dog Night, Steppenwolf, and even from Simon & Garfunkel and Crosby, Stills & Nash.

Clint Holmes and Earl Turner team up at Westgate

A new show opening at Westgate on Wednesday, Feb. 14 will feature celebrated Las Vegas entertainers Clint Holmes and Earl Turner taking the stage together in “SOUNDTRACK: Your Songs. Our Stories. The Show.” This collaboration will highlight the chemistry and camaraderie between two powerful performers. These two entertainers have often shared each other’s stages as headliners and for more than two decades, lent their voices to each other’s award-winning shows.

Turner and Holmes will combine their amazing energy, voices, humor and life experiences to bring new life to the music that makes up the soundtracks of our lives. With them will be a live eight-piece band under the musical direction of Christian Tamburr, a three-time Down Beat Magazine Music Award winner.

Holmes is a consummate entertainer, performer and recording artist scoring a No. 1 hit in 1972 with “Playground in My Mind.” His latest album “Rendezvous” was nominated for two Grammy® Awards in 2018.

Thirty-year veteran Turner is a multi-talented singer, songwriter, musician, dancer and actor. He was inducted in the New Orleans Music Hall of Fame.

Performances will be Thursday through Sunday at 7 p.m. in the International Westgate Theater at Westgate. Tickets are $48, $58, $78 and $98.

Erykah Badu is returning to Brooklyn Bowl at The Linq Promenade for a third consecutive year on Thursday, Feb. 15 at 8 p.m.

Badu had sold out dates at the venue in January 2016 and July 2017, mesmerizing crowds with her emotional connectedness, her spiritual performances and her cultural and political awareness. Her music is often described as a blend of R&B, Hip Hop and jazz.

The hardcore hip hop duo Insane Clown Posse will host their Juggalo Day Weekend with The Heckles & Macabre Show at the Fremont Country Club downtown, which is a new state-of-the-art 800-capacity concert venue, on Feb. 16 and 17. Insane Clown Posse is a cartoonish metal/rap band with a vaunted live show featuring open fires, chainsaws, liters of soda dousing the audience, and more emphasis on performance art than music. Other special guests who will include Lyte, Big HooDoo, and Ouija.