On June 26, as Comstock Mining Inc. romanced its investors and future prospects with tours, presentations and the good news about the expansion approval, CRA held its third annual Meet ‘n’ Greet Barbecue at Maynard Station in Gold Hill. With music, food and neighborly conversation, about 60 Comstockers and friends enjoyed the sunny afternoon. 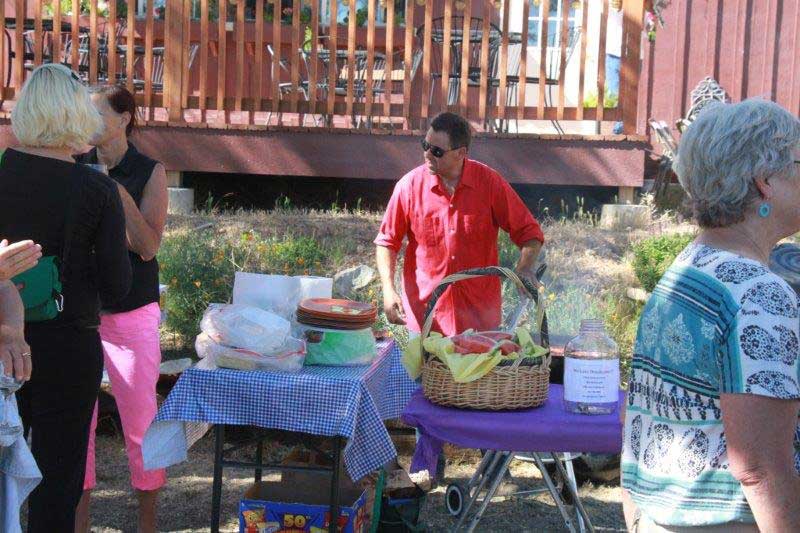 The event was a benefit for the preservation of the Virginia City National Historic Landmark which is being threatened by open pit surface mining, and it coincided with Comstock Mining Inc’s stockholder meetings.

“We all have something in common here on the Comstock,” said CRA Board president Robin Cobbey. “We wanted the opportunity for supporters of ethical mining to meet and talk with neighbors, catch up on the news, and share a good time together. That’s why we threw this party.”

Storey County Commissioner Bill Sjovangen was the only official from either county to attend, a considerable change from the gregarious pre-election presence of so many candidates.

In addition to the food and fellowship, music was provided by the Ukulocos, a three-ukulele ensemble that dazzled the crowd to open the entertainment. The Wabuska Yachting Club, a band with deep and varied musical roots and an eclectic play list also performed, and the mood was amiable when John Winfield, Board Chairman of CMI, walked up from the Gold Hill Hotel with one of his myrmidons.

Slightly disheveled and perhaps a bit tipsy, Winfield fastened onto Susan Stornetta, who had been among the CRA supporters he spoke with two years previously, and began venting his gripes about CRA and the local opposition. As a resident of American Flat, she and her husband Jim Allander have been impacted most directly by CMI. The dirt and rock that had once been Hartford Hill is being heaped in front of their home, to become their view.

“He’d like to placate us, he wants us to like him, says he will be a good steward, and wishes we would stop wasting everybody’s time and get with the program,” she said. Susan also introduced him to her son Sam, our bratwurst bbq chef. Sam then became Winfield’s principal confidante as he poured out grievances against the local citizens, including me.

John Winfield nearly broke his neck with a whiplash triple take, and Sam tells me the expression on his face was delicious beyond description.

For the record, John V. Winfield knows where I live. We’ve been at many public meetings together. I am not hiding from him, I am avoiding his company.

That’s because I can’t forget that the first words out of his mouth to the people here in Gold Hill two years ago were lies. Even worse, they were obvious lies. He told us he wouldn’t be sworn in as Chairman of the board until the next day, so there were a lot of things he wasn’t aware of yet about CMI and its activities. But we knew he held 78% of the voting shares (and always will because of the nondilution clause), and had orchestrated the company’s activities for years.

What is there to discuss with such a person?

And I may know more about John V. Winfield than he realizes. I know that his father, the Pole Ferenç Weinfeld, escaped from a forced-labor camp in Nazi Hungary and 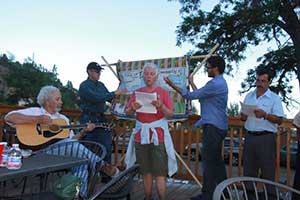 became the partisan fighter Ferenç Valenta. I know John was born in Prague, was in Paris as an infant at the end of World War II and then Ferenç Valenta brought his baby son to Palestine, as it was called then. Ten years later they went on to the USA where the boy grew into the John V. Winfield we know today. A curious tale of changing names and shifting identities. . . .