The Magic Forest of Wee Thump

Boulder City is really at the intersection of so many crossroads. While in Boulder City one just needs walk to Highwy 93, and if you go north you can reach Alaska, and if you turn south you can walk to Chile. Now that to me is very cool to think about. Not that I’d ever do it, though I met a man who did.

Boulder City, and Las Vegas for that matter, is near the northern boundary of the Mojave Desert and a bit south of the southern boundary of the Great Basin. The Mojave is probably most known as a California desert, and it mostly is. Those Northerners grumble that Southern Nevada is really more of a suburb of California, and it probably is. But no one minds all the revenue Las Vegas being the party town of the world brings in to the State’s coffers. 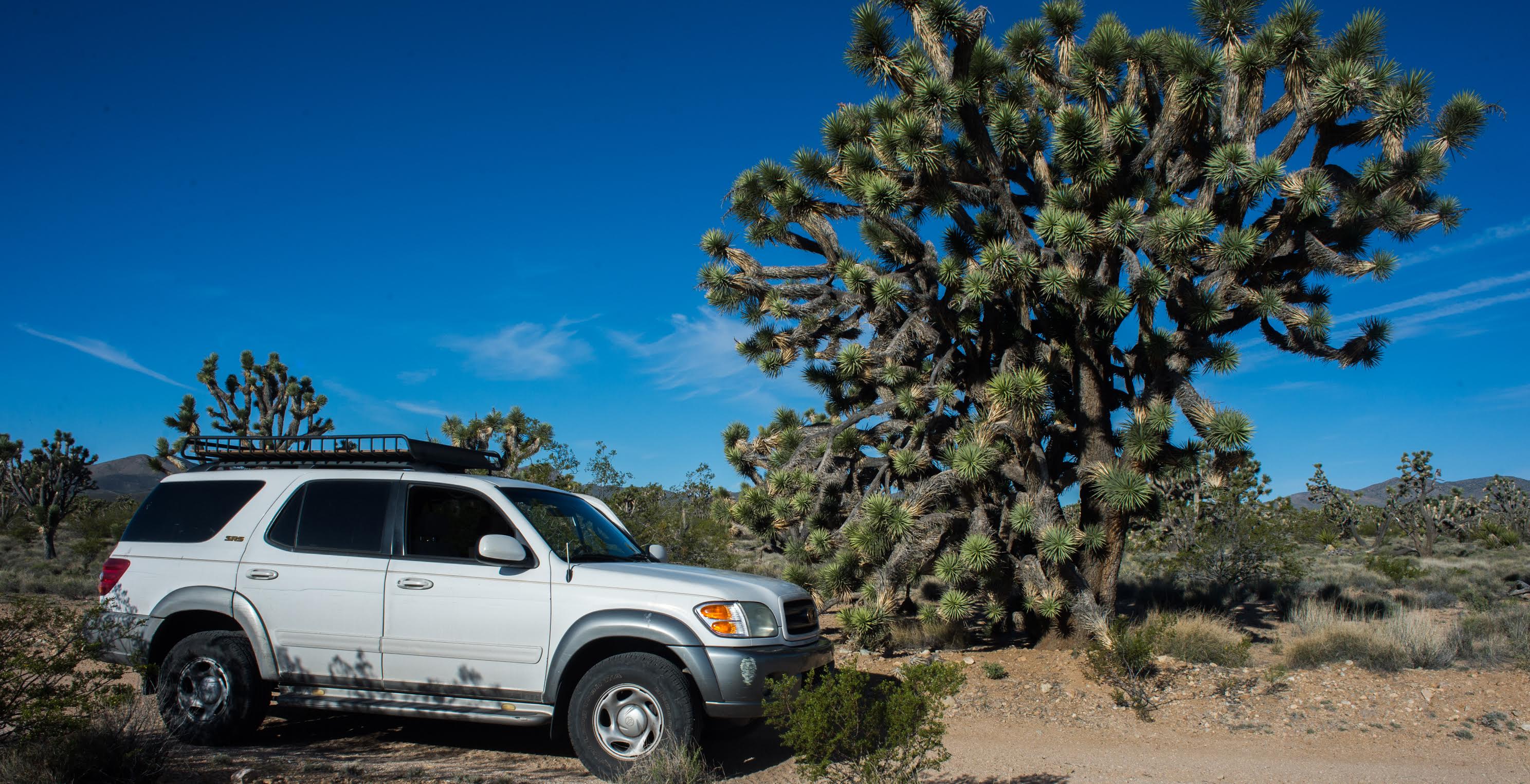 If there is one plant that distinguishes the Mojave it’s the Joshua Tree. Who am I to say what is a tree. but I’ve been told the Joshua Tree is really a member of the lily family, and if one stares at them long enough a family resemblance is noticeable, though that’s definitely not your first impression. Somewhat like finding an early tribal line of The Queen of England in some lost Druid cave. I have always thought the Joshua Tree to be a Dr. Suess character come to life. With it’s swirling branches and pointy sharp appendages it could look like a profit from the Old Testament or countless other men, beasts and demons, depending on the right light and state of mind.

Now, if you are in the mood of to visit the trees, you’re in the right place. Although Boulder City is at 2,500 feet elevation above sea level and Joshua Trees start growing at around 3,000 feet, it is the backdoor to the Mohave Preserve National Monument in California. If you’re the kind of person who enjoys entering things through the back door, you see all kinds of things normal, polite guests don’t see. But, also, you don’t always get to see things people get to see coming through the front. Like signs and good directions. In this country it is best to have a good map and not rely solely on GPS, which notoriously take people down non-existent routes where they get stranded and die because there is no cell phone service.  Let’s go for a drive and see the homes of celebrities and famous politicians; enchanted forest small towns, alien and man-made marvels, gigantic art, infamous saloons, and amazing views. All within good day-tripping distance, and you can still get back for a quick nap and dinner. Also, bring a guide book because this narrative is not a complete description of the entire journey. And, again, be sure to bring a good map. 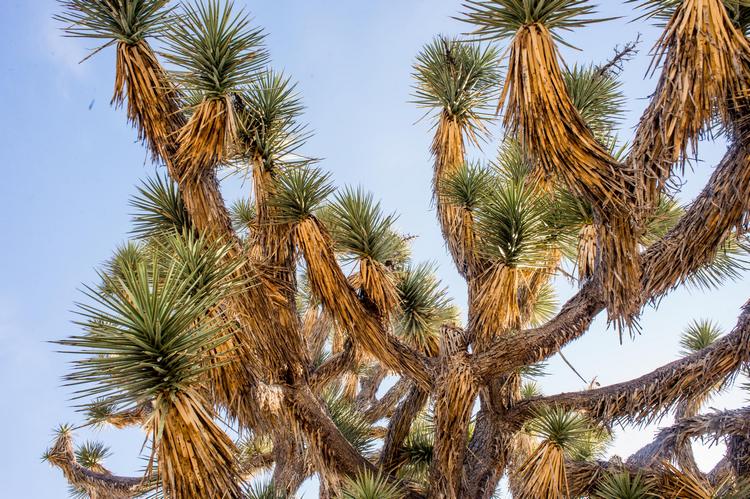 One of the grandest Joshua Tree forests can be found in the Wee Thump Wilderness Area south of Boulder City and west of Searchlight, the place where Senator Harry Reid grew up. Searchlight is a 45-minute drive south on Highway 95 through the El Dorado Valley. You will pass a huge mining operation for gravel on your right just above the huge gravel consuming I-11 Boulder City Bypass, which will in 2017 go around Boulder City. Taking away a ton of traffic coming through this fair city, but scaring the local businesses. As an example of fear-producing images, drive Route 66 to visit many dying or dead towns. Boulder City will have to survive on our good looks, hospitality and this correspondent’s post to survive. Please share this with your friends.

Next, we cross the Dry Lake Bed, home to many an adventure, if you’ve lived in BC for any length of time. if you look carefully out there you might see drones flying. Boulder City has been designated a drone test by the FAA. Really. We’re even building a drone port. After the lake, which sometimes is a lake filled with water where ancient brine shrimp, also known as Sea Monkeys in old comic books, hatch, grow, mate, lay eggs, and die, live. We are now gloriously going down the El Dorado Valley. For the city of Boulder City it is a golden valley with photovoltaic cells paying leases to the only city with no gaming in Nevada. Past Keyhole Canyon to the west, which is another story,  we pass into the land of the Joshua Tree, so we know we’ve reached the 3,000 feet level. Passing an old gravel pit made famous by the Sharon Angle Senate campaign against Harry Reid, where Sara Palin, the Governor of Alaska and Vice Presidential candidate, rallied the angry mobs. After slowing down after all the warning signs or getting a ticket, whichever comes first, take a hard right on Nevada Highway 164, The Joshua Tree Highway.

Over on the right hand side, across from the trailer park there is a somewhat ornate for the area, gate with a long drive to a noble but somewhat modest house. That used to be Senator Reid’s place. Definitely not the shack he was born in, but nice. With age and convenience he has a place in Henderson now, I hear,  the better to get swatted by your exercise machine.

Highway 164 is one of those great roads to have in your backyard. Spring brings wildflowers, from the tiny belly busters early in the year to the cactus blooms which go through the summer. On the left hand side of the road there will be a small sign for Walking Box Ranch. Legendary “It Girl” Clara Bow and her cowboy movie star husband Rex Bell built their dream house out here in the middle of the Joshua Tree Forest. It was a working cattle ranch of over 400,000 acres. They brought along their movie star friends, like Clark Gable, Carole Lombard, Errol Flynn, and Lionel Barrymore. 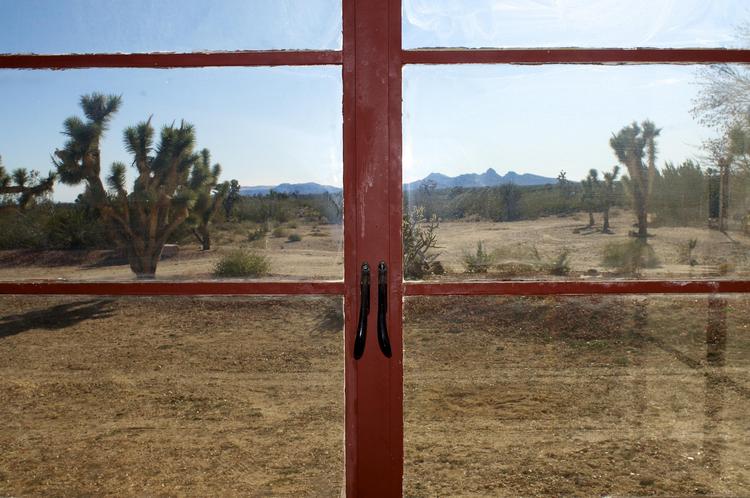 The ranch itself is owned by the BLM and managed by UNLV. It is not open to the public except at special public viewing events. The photos taken for this post were taken during one of those events. If you’re driving down to the ranch you can still walk it’s perimeter and get a cool experience. By the way, this road is also one of those roads where you tell yourself, “I gotta see whats down that road.” This particular road heads into the New York Mountains. (Bring a good map).

Going west toward Nipton, California you’re going uphill toward the pass above. About halfway up the hill is The Wee Thump Wilderness Area. Wee Thump, according to Wikipedia, means “Ancient Ones” to the Paiute. And the Joshua Trees certainly are that. Some are over a thousand years old. There are roads that skirt the edge of the Wilderness Area. Try going real slow. I’d recommend a 4-wheel-drive vehicle that has a low range and just let the vehicle slowly crawl through the landscape. Going under 5 mph does a couple of good things, like allowing you to see wildlife and critters in general. Stop and get out, take a walk and look around, and find something to smell, like Agave Blooms.

You crest the summit of Hwy 164 near the radio tower. Woah, that make sense.  Rolling downhill towards Nipton California, Powerball Capital of the Crescent Mining District, look towards your right down into the valley, and you will go, “Wow! What the heck is that?” What you’ll see are three huge towers glowing white, surrounded by focused mirrors which are heating molten salt that is boiling steam and making electricity for the epic consumption of  western California. I can’t describe it, but it makes me feel like I have just entered the future.

Down to Nipton, I try to stop in the little store and buy something. For the old timers in Boulder City, Nipton is where you went to buy your California Lottery tickets, lotteries being illegal in Nevada because of it’s gambling. The west is full of these ironies that make for interesting stories about all of us. One thing you should do is stop near the store and the tracks and read the interpretive signs about the area. I swear, by the time your done you will be Googling Clara Bow. Or. if your really bored, go check out the railroad tracks and see what you find. It could be a train. Or put your head against the tracks and listen. Don’t burn your ear if the sun’s out, and if you hear a really low rumble, move your head.

Now, if you started this trip around sunrise you might be getting a little hungry or thirsty. Well across the valley and up the hill is I-15 and all the possibilities major transportation corridors present. Or you could go south on Ivanpah Road and explore the Mojave National Preserve, if you have a lot of gas, food, water, etc., because there’s not a lot of commerce or adventure down that road. (Bring a good map.) But my suggestion, if the friend you’re with has to catch a plane in the late afternoon, is to head up I-15, get off at Jean and take a little detour to Goodsprings — especically to the Pioneer Saloon. On the way to Goodsprings, though, you’ll probably notice “Seven Magic Mountains” by Ugo Rondinone,  a fluorescent earthwork you can’t miss. If you do, you shouldn’t be driving. I love earthworks. One of the most famous “Earth art” artists of all, Michael Heizer, did one of his early works here, making a trench in the dry lake bed. His “City” is the jewel of the Great Basin National Monument and “Double Negative” is in the Canyons above Moapa. While you’re in the area, don’t miss Robert Smithson’s  Spiral Jetty in the Great Salt Lake. Okay, that’s a bit of a drive, but the West is big, with lots to see.

The Pioneer Saloon is my favorite dive biker bar and historical spot with a story to tell. I’ve stopped by there for years, and today it really has more of an upscale feel than in days past. Not necessarily less like a dive, but now they have serious barbecue and craft beers. The first time I stopped there with my then young  children, I stopped to take a photo. Two of the friendly local biker girls wanted to be a part of the photo and show off what I found to be the town salute by counting to three and showing my son what I’m sure were his first nude breasts out in public. The saloon first gained national fame as the place that Clark Gable sat, drank, got drunk, and waited to learn the fate of of his wife, Carole Lombard, who was found dead in a plane crash on nearby Mount Potosi. The tragedy has a Boulder City connection, as her plane was supposed to take off from the Boulder City Airport but instead took off from what is now Nellis AFB. Evidently the auto pilot was set for a departure from Boulder City, resulting in the crash. Should have brought a good map.

From Jean, for a little bonus adventure, take the Old Spanish Trail going northwest of the town up over some low-lying hills where you come out looking at Red Rock Canyon. Hit Highway 160 coming from Pahrump, turn on the map app, and go back to Boulder City. You might still have time to take a nap before dinner.

All photos by Alan Goya, GOYAphotography