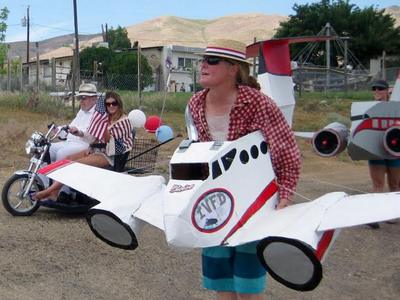 There were at least half a dozen horseback riders, the youngest being five-year-old Sarah Pfeiffer, who rode with her mom, Kelley.  They live at the nearby Quarter Circle S ranch, along with husband Darren and seven-year old son Thomas.  The parade also included Aurora Tuscarora Parks accompanying  her grandfather Dennis in his electric wheelchair. Terri Yohee and her grandson Lucas rode in a fishing boat decorated with red, white and blue bunting and hitched to husband Mike’s rig. Gold prospectors Andy and Lois  drove their four-wheeler, along with several  folks in  four-wheelers.  I don’t know who they were, but we were glad they joined in.

The hit of the  parade was the fleet of five aerial firefighting aircraft, a secret project Sidne Teske and Laura Moore worked on for a month.  Made of cardboard and glue, modeled after actual aircraft and strapped on to five lady pilots, these brightly painted  airplanes could easily serve as extreme wearable art.  Sidne says they will likely hang from the ceiling of the Duncan Little Creek Bar and Gallery in Elko until next 4th of July.

As always, the parade was followed by a barbecue and potluck on the lawn adjacent to the Pottery School. 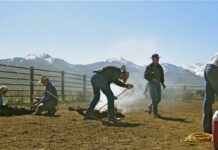 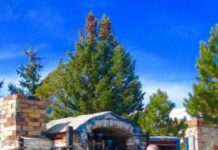 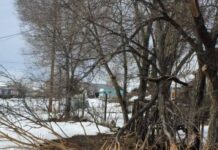 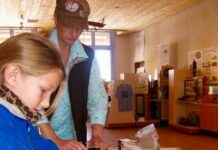 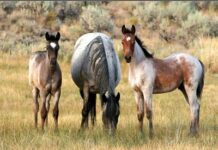