Where were you on Valentine’s Day?

Robin and I were among the dozens who braved the crisp February air to crowd into the park behind the Pershing County Court House in Lovelock. We were there to lock our love. Up to now it has only been bound and gagged.

Blissful citizens formed lines while staffers from the Commission on Tourism inscribed their names on the shiny little heart-shaped padlocks, which were then clipped to the chain around the roses on the center of the

little park. One cheerful man inscribed the names of two women along with his on the padlock he clipped to the chain, while cynics from Elko and Winnemucca were inquiring about opening a lock-cutter franchise in the Court House basement.

earth. “Lovers Lock may seem to be all about hearts and flowers,” he

told the crowd, “but it’s really about dollars and cents. Its purpose is to attract more visitors to Lovelock and the revenue they bring to the

community. Couples who stop to lock their love will stay a while and experience the other attractions.”

— has been sold to American Wagering Inc. Surely they’re betting on the power of love.

There will be no more Armpit Festivals in Battle Mountain. Tourists loved it, and the local Chamber received many eager inquiries and much positive feedback from the outside world, but the local movers and shakers hated it and it has now officially died on the vine. Sic transit gloria mundi.

In September, 2003, Eric Wolfram and Kate Lydon drove west to east on US 50 across Nevada. Like a lot of us who’ve made this drive, Eric took photos. Check them out and see Nevada the way the tourists see it.

Nevada history is phenomenally interesting, but not always easily accessible.The Nevada Observer, an internet news magazine covering life in Nevada, has an electronic reading room with many scanned books and articles from 19th and early 20th century Nevada history, accessible without charge. There’s lots of great stuff here; one example from J. Ross Browne’s “A Peep at Washoe” describes in hilarious fashion his 1860 visit to the mines of the Comstock Lode. One brief snippet: 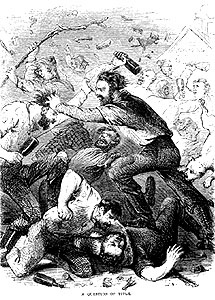 “As usual in new countries, a strong feeling of rivalry exists between the Carsonites and the inhabitants of Virginia City. I have summed up the arguments on both sides and reduced them to the following pungent essence:

“Virginia City — a mud-hole; climate, hurricanes and snow; water, a dilution of arsenic, plumbago, and copperas; wood, none at all except sage-brush; no title to property, and no property worth having.

“Carson City — a mere accident; occupation of the inhabitants, waylaying strangers bound for Virginia; business, selling whisky, and so dull at that, men fall asleep in the middle of the street going from one groggery to another; productions, grass and weeds on the Plaza.

“While this fight is going on, Silver City, which lies about midway between the two, shrugs her shoulders and thanks her stars there can be no rivalry in her case. If ever there was a spot fitted by nature for a seat of government, it is Silver City — the most central, the most moral, the most promising; in short, the only place where the seat of government can exist for any length of time. This Kilkenny-cat fight is highly edifying to a stranger, who, of course, is expected to take sides, or at once acknowledge himself an enemy. The result, I hope, will be satisfactory and triumphant to all parties. I would suggest that the government be split into three slices, and a slice stowed away under ground in each of the great cities, so that it may permeate the foundations of society.”

Quick notes from beyond the mountains: The building that housed the lost-and-gone-forever Outlaw Restaurant in beautiful downtown Baker is reopening as Great Basin Art and Antiques.

The gallery will feature work created by artists from the Great Basin area of Nevada and Utah. It will open on Mother’s Day, May 14th and remain open until the end of September. Send an e-mail for more info . . . On Valentine’s Day The Art Bar at 1511 S. Main Street in Las Vegas (now showcasing an eclectic collection of new paintings by Dray) offered nuts and bolts to single customers. Men received a nut and women got a bolt, and were sent to find the partner that fit. Those who succeeded got $20 in bar credit and made new friends in the process . . . Here’s a unique break from the ordinary you can do on Monday nights in Sparks: head for the Upper Deck Bar of the Silver Club and listen as Reno’s Big Swing Band rehearses. Spectating is encouraged from 7 to 9 pm. It’s free to attend, but they do charge for drinks at the bar . . . My note last time about the online map of the Las Vegas Strip prompted a message with news about a new interactive set of maps here. . .

They’ve imploded another casino in Las Vegas. This time it was the 166-room Bourbon Street Hotel and Casino near the Strip and Flamingo Road, and it came down at about 2:30 am on Valentine’s Day. Wayne Newton was an investor when the property opened in 1980 as The Shenandoah. In 1985 the casino became New Orleans-themed Bourbon Street; Harrah’s purchased the property last spring, but has not announced plans for the eight acres now being cleared of debris. Expect a multi-billion-dollar announcement soon . . . A search on The Onion website brought up this list of 32 Nevada stories dating back to 2000. Just reading the list made me laugh out loud. . . It isn’t often that I have a meal I feel I have to tell everyone about, but it happened when I had lunch at Oceano in the Reno Peppermill. Hurry over there any time after 11 am and have the Combination Pan Roast. Trust me, it’s the best!

Overheard at the El Capitan Casino in Hawthorne: “Enjoying life is as easy as licking honey off a thorn.”