by Peter A. Kraemer

Here ‘s a photo (I assume by Gus Bundy) of A.J. “Joe”Liebling and Lucille Spectorsky with Lucius Beebe, Chuck Clegg and Katie Hilyard of “the Katies” in the doorway of the Nevada Brewery in Virginia City on the occasion of their wedding in 1948 or ’49. 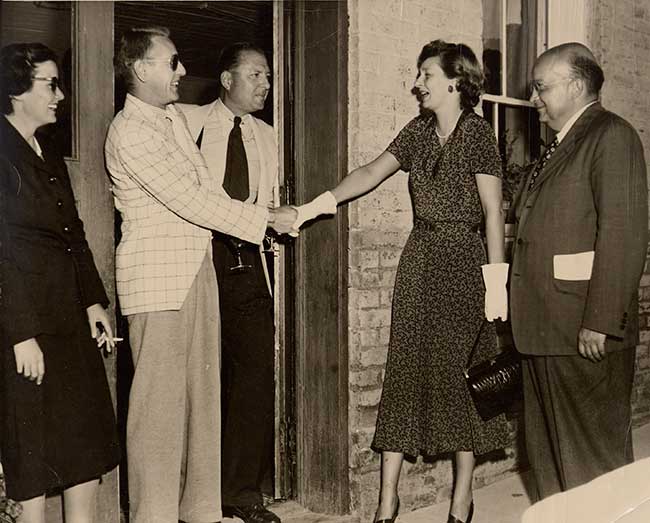 Lucille came back to divorce Joe in 1955, and stayed with us for the requisite time. She took up with Hugh Marchbanks, who was the model for “Gay” in the movie. My mother said that the Marilyn Monroe character was a combination of Adine Stix and another woman whose name I can’t recall. She was certainly not Lucille.
“The Misfits” opens with a scene of Gay putting a tall woman on the train to St. Louis. That was Lucille, who considered herself “a St. Louis aristocrat”. Miller showed a mean streak with some remark about a “chain of drycleaners” back there; even chose an actress who looked a lot like Lucille.
According to Bruno, of Bruno’s in Gerlach, the story of “The Misfits” was adapted from a letter that Lucille sent to someone in NY describing a trip with Hugh into the area north of the Black Rock Desert to look for Mustangs. I was on that trip.

“You all sound like a nest full of fourteen magpies”, Hugh said, at my mother and Lucille who were jabbering happily about “art” or something and dropping lots of names.
Mr. Marchbanks, King of the Mustangers, had been sitting silently on an old Presbeterian pew in the livingroom/barroom of “the Brewery” for hours. He told Lucille he’d see her and me in Gerlach the next day, and left. The idea was that he’d take his old pickup up there that night and we’d come up in the morning in Lucille’s brand new turquoise blue “56 Ford station wagon with Chiquita, her Australian Shepherd with one blue eye.

At about noon we came upon Hugh and his slow rig, truck and horse and trailer, crawling along the dry lake bottom just north and east of Pyramid and paused for a conference. Lucille got mad, which I didn’t get at the time. Turned out Hugh was not supposed to have stopped off in Reno where he had another “girlfriend” (the actual term used, was “squaw”).
I was asked if I’d rather ride the rest of the way with Hugh; and I said “I sure would”; then Lucille and Chiquita flew past us and disappeared over the horizon in about a half a minute.
“What’s that damn fool woman gone and done now?” said Hugh about an hour later as we crested a ridge south of Empire. I couldn’t see a thing, but in a while I spotted a little turquoise blue speck half way up the bare earth cutout atop the next ridge. It took about five minutes to get there. Lucille and Chiquita were sitting on a rock looking dusty and disgusted and the Ford was upside down maybe fifty feet above the road.

Bruno came out with his tow-truck and I got to ride into Gerlach at a funny angle in a wrecked station wagon. That night they put me in a room at the “Hotel” while they drank and fought down at the “Country Club”. In the morning Hugh and I set off across the Black Rock. Lucille was going to wait in town for Bill Garavanta to arrive from Reno in the Piper Cub and she’d ride with him up to the line shack in the Black Rock Range.

About a mile out of Gerlach, Hugh took a short piece of rope and lashed the steering wheel to the window crank and said, pointing north-northeast, “You see that canyon up there? That’s where we’re headin’, if we get off line or you see any big black rocks in front of us you wake me up okay? And watch the geiger counter.” Then he set the hand throttle so we were going about 15 miles an hour, pulled down his Stetson and went to to sleep.
So I watched the Geiger counter. In those days everyone figured they might strike it rich in uranium, “it’s Nevada after all”. For awhile I sat on the running board so I could trail the sensor just above the alkali, and eventually ended up for a time on the tailgate of the horse trailer which was more comfortable.

The line shack had probably been someone’s nice little ranch up until WWII, it had a nice pond, an iron pump that worked and lots of rodents and blackbirds and–magpies. At around three or four Lucille and Garavanta landed on the short stretch of level road in front of the house. There were torn strips of canvas hanging off both wings of the Cub and Garavanta was laughing happily about the sagebrush he’d clipped the tops off on the way up from Reno. “Some of ’em must’ve been 20 or 30 feet tall!” He said.

We spent the rest of that afternoon taping up the plane and piling rocks and dirt on the outside edge of the first curve in the road, so the plane could bounce off the edge and drop down into the canyon on take-off. When it did that it would disappear for a long time; there was considerable suspense waiting for it to reappear, a little yellow Piper form crawling up the far wall a few feet above the rocks.

Next morning I woke a little before dawn and watched from my bag on the floor as Hugh went out the door with a 30-30. Next time I woke up it was to the aromatic sizzling of big steaks and eggs and toast. After the feast we did some more work on the “launching ramp” and watched Garavanta’s departure on his search for the horses.
Hugh said he wanted that we should go over to his friends’ ranch nearby, partly because, “There’s some real perty girls over there about your age, twelve or thirteen I reckon.” ( I was eleven) “You ought to meet ’em.” So we bounced along over rocks and ruts for about a half hour. When the friends’ ranch came into sight, Hugh stopped for a moment and turned to me with a very stern look. “Now don’t you go sayin” nothin’ ’bout what we had for breakfast, y’hear?”

The very pretty girls must not have been at home because I don’t remember anything until later when we picked up Lucille at the line shack and went to see another friend who lived on the way to where Hugh wanted to scout for mustangs. We managed to stick the pickup in the middle of a bed of watercress just down from the friend’s rather large log cabin. I saw a white haired and bearded head in a window for a second and then, very quickly, a Ford Model “T” one ton truck with no bed, just the rails, zipped out from behind the cabin crossed the creek twice threw a chain at us and we were there. The friend had an attic full of antelope jerky. He told me that every year after the first big snow he’d go out and shoot a lot of antelope and keep them in snowbanks until he’d gather them up and make them into jerky. He had a big fireplace at one end of his cabin and a chimney at the other end. The attic and the smoker were one and the same.

I chewed on one piece of antelope the whole rest of that day as I supposedly watched with binoculars for wild horses from the bed of the truck, while Hugh and Lucille fought some more in the cab. A bouncing truck bed is not an ideal platform for looking through binoculars so of course I didn’t spot any horses. Actually, I may have seen a couple; but not enough of them to mention.