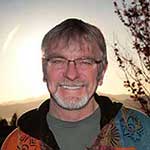 The frantic activity at left is Trish and Deon Reynolds, with the able and enthusiastic assistance of Mark Salinas, mounting a photo mural, and it is the prelude to big doings in Carson City this month. The mural faces west on a small structure at the edge of the Carson City Nugget parking lot and is entitled “Roper”.

The city is launching its NEA Big Read program in celebration of Charles Portis’ True Grit novel on Thursday, May 3rd at 5:30 pm at Western Nevada College’s Bristlecone Art Gallery. Big Read is presented in partnership with the Carson City Library and the Nevada State Museum.

With events almost every day in May ranging from “Children’s Cowboy Concert” to Nevada Rattle Snake identification workshop, there are 35 events to take part in. 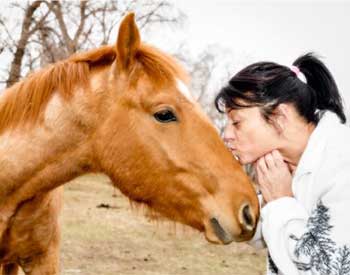 Tanja Musselman has been taking photographs since she was about 10, excelling during her time at Carson City High School. “Every photo is pleasing both visually and spiritually”, says Gallery owner Robin McGregor. Tanja’s work is on special display during May at the Carson Art Gallery at Curry and 2nd streets with an Artist’s Reception on Thursday, May 3rd, 4-7 pm.

Says Tanja, “I love to go it alone and let the wind lead me to my next discovery; and getting down in the dirt to capture the veins on a leaf or a frog’s eye in a pond is where you will most likely find me.” She will be on hand for a meet and greet, and light refreshments will be served. 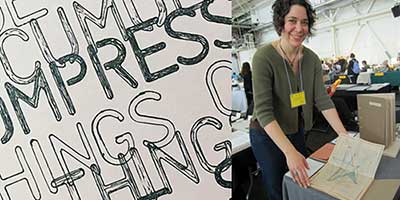 In Fallon the Churchill Arts Council will be having an Artist’s Talk & Reception with Join Inge Bruggeman, Director of UNR’s Black Rock Press. On Saturday, May 5, she will talk about her exhibit “Deposits: New Work”, at an Artist’s Talk & Reception from 5 to 7 pm. Her work will be on display at the Classroom Gallery in the Oats Park Art Center till July 14. Check out the upcoming Events at this magnificent venue. For more Information, call 775.423.1440.

In Reno the theater community is buzzing over the gender-bending story of Hedwig and the Angry Inch. This is an ambitious production that could only be done with two of Reno’s powerhouse Theaters  —Bruka Theater and Good Luck Macbeth — combining their talents. It comes together with power and emotion as “Hedwig and the Angry Inch” hits the stage at Good Luck Macbeth.

“Hedwig and the Angry Inch” is a cult rock musical by John Cameron Mitchell and Stephen Trask with music inspired by the likes of Iggy Pop and David Bowie. First performed in 1998 in an off-Broadway production to much critical acclaim and awards, it is directed here by Bill Ware. 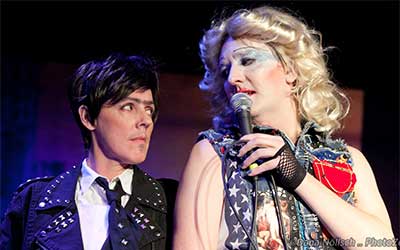 Hedwig is a raunchy rocker with plenty of ghosts and demons from the past. Growing up in East Berlin, Hedwig played a high price to escape and create a new life. Joe Atack plays Hedwig to perfection in both the musical performances and with the emotion of the haunted rocker stuck between wanting and being.

Hedwig’s partner and husband, Yitzhak, is played by Amy Grinder. Yitzhak is playing second fiddle to Hedwig but not for much longer. Amy has plenty of opportunities to show her powerful voice as Yitzhak finds his voice with the help of Hedwig. When Amy opens up and belts out a song the audience knows that they are in the presence of something special.

Then there is the band, the Angry Inch. 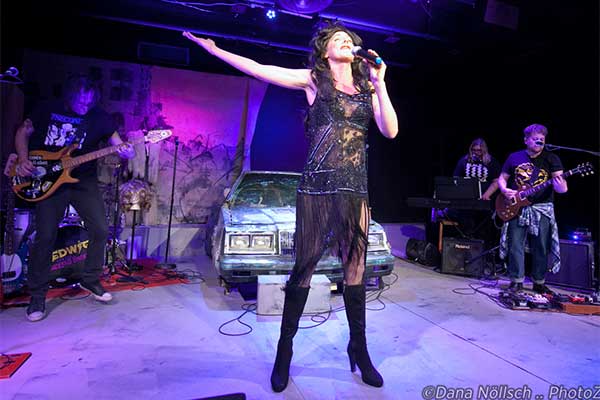 They are loyal to Hedwig if not always happy to put up with the attitude. Trust me, the band is as close to perfect as one would hope for. Powerful and tight the band adds authenticity to the Punk Rock influenced music.

This is a very ambitious production and the cast and crew do not disappoint. I have to give a big shout out to the crew who have created the atmosphere, blending with the music and attitude.

“Hedwig and the Angry Inch” plays through May 12th. Listen to me on this! Get your tickets now before they sell out!