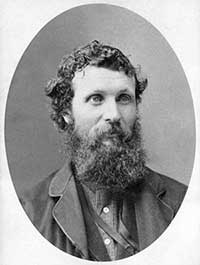 Nevada is one of the very youngest and wildest of the States; nevertheless it is already strewn with ruins that seem as gray and silent and time-worn as if the civilization to which they belonged had perished centuries ago. Yet, strange to say, all these ruins are results of mining efforts made within the last few years. Wander where you may throughout the length and breadth of this mountain-barred wilderness, you everywhere come upon these dead mining towns, with their tall chimney stacks, standing forlorn amid broken walls and furnaces, and machinery half buried in sand, the very names of many of them already forgotten amid the excitements of later discoveries, and now known only through tradition — tradition ten years old.

While exploring the mountain ranges of the State during a considerable portion of three summers, I think that I have seen at least five of these deserted towns and villages for every one in ordinary life. Some of them were probably only camps built by bands of prospectors, and inhabited for a few months or years, while some specially interesting canyon was being explored, and then carelessly abandoned for more promising fields. But many were real towns, regularly laid out and incorporated, containing well-built hotels, churches, schoolhouses, post offices, and jails, as well as the mills on which they all depended; and whose well-graded streets were filled with lawyers, doctors, brokers, hangmen, real estate agents, etc., the whole population numbering several thousand.

A few years ago the population of Hamilton is said to have been nearly eight thousand; that of Treasure Hill, six thousand; of Shermantown, seven thousand; of Swansea, three thousand. All of these were incorporated towns with mayors, councils, fire departments, and daily newspapers. Hamilton has now about one hundred inhabitants, most of whom are merely waiting in dreary inaction for something to turn up. Treasure Hill has about half as many, Shermantown one family, and Swansea none, while on the other hand the graveyards are far too full.

In one canyon of the Toiyabe range, near Austin, I found no less than five dead towns without a single inhabitant. The streets and blocks of “real estate” graded on the hillsides are rapidly falling back into the wilderness. Sagebrushes are growing up around the forges of the blacksmith shops, and lizards bask on the crumbling walls.

While traveling southward from Austin down Big Smoky Valley, I noticed a remarkably tall and imposing column, rising like a lone pine out of the sagebrush on the edge of a dry gulch. This proved to be a smokestack of solid masonry. It seemed strangely out of place in the desert, as if it had been transported entire from the heart of some noisy manufacturing town and left here by mistake. I learned afterwards that it belonged to a set of furnaces that were build by a New York company to smelt ore that never was found. The tools of the workmen are still lying in place beside the furnaces, as if dropped in some sudden Indian or earthquake panic and never afterwards handled. These imposing ruins, together with the desolate town, lying a quarter of a mile to the northward, present a most vivid picture of wasted effort. Coyotes now wander unmolested through the brushy streets, and of all the busy throng that so lavishly spent their time and money here only one man remains — a lone bachelor with one suspender.

Mining discoveries and progress, retrogression and decay, seem to have been crowded more closely against each other here than on any other portion of the globe. Some one of the band of adventurous prospectors who came from the exhausted placers of California would discover some rich ore — how much or little mattered not at first. These specimens fell among excited seekers after wealth like sparks in gunpowder, and in a few days the wilderness was disturbed with the noisy clang of miners and builders. A little town would then spring up, and before anything like a careful survey of any particular lode would be made, a company would be formed, and expensive mills built. Then, after all the machinery was ready for the ore, perhaps little, or none at all, was to be found. Meanwhile another discovery was reported, and the young town was abandoned as completely as a camp made for a single night; and so on, until some really valuable lode was found, such as those of Eureka, Austin, Virginia, etc., which formed the substantial groundwork for a thousand other excitements.

Passing through the dead town of Schellbourne last month, I asked one of the few lingering inhabitants why the town was built. “For the mines,” he replied. “And where are the mines?” “On the mountains back here.” “And why were they abandoned?” I asked. “Are they exhausted?” “Oh, no,” he replied, “they are not exhausted; on the contrary, they have never been worked at all, for unfortunately, just as we were about ready to open them, the Cherry Creek mines were discovered across the valley in the Egan range, and everybody rushed off there, taking what they could with them — houses machinery, and all. But we are hoping that somebody with money and speculation will come and revive us yet.”

The dead mining excitements of Nevada were far more intense and destructive in their action than those of California, because the prizes at stake were greater, while more skill was required to gain them. The long trains of gold-seekers making their way to California had ample time and means to recover from their first attacks of mining fever while crawling laboriously across the plains, and on their arrival on any portion of the Sierra gold belt, they at once began to make money. No matter in what gulch or canyon they worked, some measure of success was sure, however unskillful they might be. And though while making ten dollars a day they might be agitated by hopes of making twenty, or of striking their picks against hundred- or thousand-dollar nuggets, men of ordinary nerve could still work on with comparative steadiness, and remain rational.

But in the case of the Nevada miner, he too often spent himself in years of weary search without gaining a dollar, traveling hundreds of miles from mountain to mountain, burdened with wasting hopes of discovering some hidden vein worth millions, enduring hardships of the most destructive kind, driving innumerable tunnels into the hillsides, while his assayed specimens again and again proved worthless. Perhaps one in a hundred of these brave prospectors would “strike it rich,” while ninety-nine died alone in the mountains or sank out of sight in the corners of saloons, in a haze of whiskey and tobacco smoke.

The healthful ministry of wealth is blessed; and surely it is a fine thing that so many are eager to find the gold and silver that lie hid in the veins of the mountains. But in the search the seekers too often become insane, and strike about blindly in the dark like raving madmen. Seven hundred and fifty tons of ore from the original Eberhardt mine on Treasure Hill yielded a million and a half dollars, the whole of this immense sum having been obtained within two hundred and fifty feet of the surface, the greater portion within one hundred and forty feet.

Other ore masses were scarcely less marvelously rich, giving rise to one of the most violent excitements that ever occurred in the history of mining. All kinds of people — shoemakers, tailors, farmers, etc., as well as miners — left their own right work and fell in a perfect storm of energy upon the White Pine Hills, covering the ground like grasshoppers, and seeming determined by the very violence of their efforts to turn every stone to silver.

But with few exceptions, these mining storms pass away about as suddenly as they rise, leaving only ruins to tell of the tremendous energy expended, as heaps of giant boulders in the valley tell of the spent power of the mountain floods. 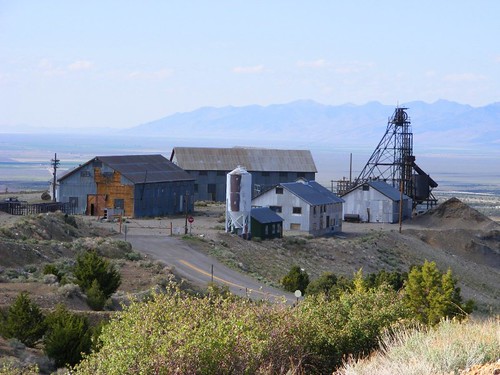 In marked contrast with this destructive unrest is the orderly deliberation into which miners settle in developing a truly valuable mine. At Eureka we were kindly led through the treasure chambers of the Richmond and Eureka Consolidated, our guides leisurely leading the way from level to level, calling attention to the precious ore masses which the workmen were slowly breaking to pieces with their picks, like navvies wearing away the day in a railroad cutting; while down at the smelting works the bars of bullion were handled with less eager haste than the farmer shows in gathering his sheaves.

The wealth Nevada has already given to the world is indeed wonderful, but the only grand marvel is the energy expended in its development. The amount of prospecting done in the face of so many dangers and sacrifices, the innumerable tunnels and shafts bored into the mountains, the mills that have been built — these would seem to require a race of giants. But, in full view of the substantial results achieved, the pure waste manifest in the ruins one meets never fails to produce a saddening effect.

The dim old ruins of Europe, so eagerly sought after by travelers, have something pleasing about them, whatever their historical associations; for they at least lend some beauty to the landscape. Their picturesque towers and arches seem to be kindly adopted by nature, and planted with wild flowers and wreathed with ivy; while their rugged angles are soothed and freshened and embossed with green mosses, fresh life and decay mingling in pleasing measures, and the whole vanishing softly like a ripe, tranquil day fading into night. So, also, among the older ruins of the East there is a fitness felt. They have served their time, and like the weather-beaten mountains are wasting harmoniously. The same is in some degree true of the dead mining towns of California.

But those lying to the eastward of the Sierra throughout the ranges of the Great Basin waste in the dry wilderness like the bones of cattle that have died of thirst. Many of them do not represent any good accomplishment, and have no right to be. They are monuments of fraud and ignorance — sins against science. The drifts and tunnels in the rocks may perhaps be regarded as the prayers of the prospector, offered for the wealth he so earnestly craves; but, like prayers of any kind not in harmony with nature, they are unanswered. But, after all, effort, however misapplied, is better than stagnation. Better toil blindly, beating every stone in turn for grains of gold, whether they contain any or not, than lie down in apathetic decay.

The fever period is fortunately passing away. The prospector is no longer the raving, wandering ghoul of ten years ago, rushing in random lawlessness among the hills, hungry and footsore; but cool and skillful, well supplied with every necessary, and clad in his right mind. Capitalists, too, and the public in general, have become wiser, and do not take fire so readily from mining sparks; while at the same time a vast amount of real work is being done, and the ratio between growth and decay is constantly becoming better.