In the fall of 1968, a man named Frank van Zant was driving west on I-80 in a 1946 Chevy pickup truck. Frank was a divinity school drop-out, a 20-year deputy sheriff in Sutter County California, and a retired private investigator. Now he and his third wife were beginning a new life together. Near the old railroad town of Imlay, the old truck broke down. Frank managed to get it off the highway and into the sagebrush where they set up camp. When the owner of the property came along and offered to sell the 5-acre property at a bargain price and easy terms, they bought it.

And then things started getting interesting. With desert flotsam and bags and bags of cement, he and a small number of volunteers began to build a phantasmagorical structure, completed to its present state in 1975 or thereabout.

Built of desert flotsam and concrete, the monument is an astonishing work of art, as powerful and intriguing as the Watts Towers. During construction, a small population of kindred spirits joined in the effort, living here and there in the surrounding canyons and attempting to connect with the spirituality of the ancients. Quoting a Washoe prayerman

he said: “‘In order to be one with the power, you’ve got to get up every morning one with the power.’ And this is essentially the only lesson we teach here.” Variously described as a monster and a visionary, Rolling Thunder”s presence attracted a small community of spiritually directed residents all building, gardening and otherwise working to expand and maintain the shrine. “The only qualifications we’ve ever had is that they aspire to the pure and radiant heart.” 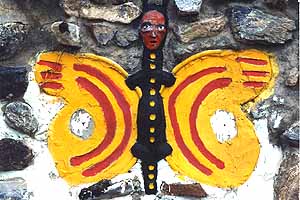 I stopped in to visit in 1975, when I was updating the first edition of The Nevada Traveler (as we spelled it then), and spent an interesting hour with the gaunt, sad-faced man. He’d been a tanker in WWII, and had been burned in the advance into Germany, he told me. He didn’t mention his 20 years as a Sutter County Deputy Sheriff, or having retired as a private investigator, but he did know a lot about the wrongs done to the California tribes.

One of his displays inside the eccentric structure was a circle of human skulls on the dirt floor, dedicated to the memory of the hundreds of Shasta and Wintu Indians poisoned to death at a feast the whites invited them to in 1851.

Rolling Thunder is gone now, and his followers dispersed. The property is occupied and protected by his grown children who welcome visitors for self-guided tours.

The strangeness of the place is somewhat daunting without Rolling Thunder’s personal welcome, but even a brief visit is an unforgettable experience.

The fantastic vision represented by the rock and concrete structures with their spidery arches, antic figures, stoic silences, buttresses, ladders, ramps, doorways, paths and the profusion of sculptures all combine to transport you . . . elsewhere.

On my last visit I didn’t see the item that most represented Rolling Thunder’s theme in my memory — a rusty pedestal (an ore car from a nearby mine? a safe? a stove?, with a heap of bleached bones and skulls piled on top and spilling off onto the ground) and the single word painted across it: Promises.

The compound has been cleaned up (“My dad spent 20 years hauling junk,” says his son Dan, “and I’ve spent almost that long hauling junk out.”), and the structures fenced off to prevent vandalism and injury. The paint, so vivid when it was splashed and daubed on, has faded and been worn away; the structures and figures are slowly crumbling, the television screens, railroad ties and roadside debris falling to earth, devolving back to junk.

Acknowledging the monument’s artistic and historic value, the state has no intention of acquiring it. Too big a liability, costly to maintain, etc etc, all perfectly legitimate objections. So Dan Van Zant, Frank’s eldest son, is seeking a buyer or benefactor for the property. E-mail him here.

The story of Frank Van Zant, better known as Rolling Thunder Mountain, is told in great detail on the extensive website maintained by his son Daniel, with insightful text and photos by Richard Menzies, from his book “Passing Through: An Existential Journey Across the Outback of America”. The monument is pictured here in all its colorful glory while the actual artifact grows more fragile with each sun-baked, wind-scoured, ice-frozen day.

The story of Roy Frisch’s murder in a previous NevadaGram prompted several interesting notes from afar, including one asking how it was that eastern gangsters came to hide way out west.

The answer is that Reno was a one-stop shop. The local police are looking the other way, so depending on who else is looking for you, you can be a little more comfortable here. Not only that, the hot money you have in those suitcases can be dispersed to customers over the faro, roulette and 21 tables at the Bank Club for a modest 15%. And of course there were girls and liquor too. That’s why, when Alvin Karpis got away with the $100,000 Hamm kidnapping ransom, he made his getaway to Reno, waited awhile, and went home with $85,000 in clean money.

Cold Case Clue: Another note contained a stunning surprise, the tale of a second sighting of men in suits in a big black car on the morning after Roy Frisch’s disappearance! The area the writer describes is in Stillwater, home to an Indian Reservation and a wildlife refuge. The Fairview Mine is 39½ miles east of Fallon, and then a mile and a half south of US 50, into the hills. Stillwater is 11 miles east of Fallon, and the spot described below is a few miles north of the highway. Stillwater is off the direct route between Fallon and the Fairview Mine, but it is definitely in the neighborhood, less than 30 miles away, and it’s easy to conceive of plausible reasons for the men who threw Roy’s body down the mine shaft to be where this story puts them.

“I think it was 1978, my uncle was helping me move my trailer house to Reno, and he was talking the whole time. My uncle was quite a talker, and he knew a lot about Nevada, having drilled water wells all over the state for 50 years. So on the way down the Truckee on I-80, he told me stories about Pat McCarran as we passed the McCarran

homestead, and he had a story for just about everything that we passed.

“The subject came around to the farm; he had bought the acreage as a young man from the Kent family in about 1918, and all of us in the family had lived there at one time or another.

“He told me that one morning he was working on a fence about half a mile from the house, and a man in a suit came up to him, and offered him $50 to pull his car out of the mud. So my uncle harnessed the horse, and brought rope and other necessary apparatus, and pulled this long black car out the Stillwater mud, and collected his $50, which was a tidy sum in the 30’s. He told me that he knew who they were when he read the paper about Roy Frisch the next day, so he went to Old man Kent, who was the patriarch of the district, and asked for advice.

“But Mr. Kent told my uncle to keep his mouth shut, and my uncle, who wasn’t the mouth shutting type, told the family (which my sister Jo told me years later) that he had just rescued a bunch of movie stars from a fling in the desert, and that’s where he got the $50. But 44 years later, I guess he felt it was safe to give me the real version.

“That story haunts me every time I hear about Mr. Frisch.”

How long has it been since you’ve dined like royalty? The thoughtful folks at Harrah’s Lake Tahoe have made it easy and irresistible with a monthly series of Winemaker Dinners at The Summit, the elegant 16th floor dinner house. The first is scheduled for Thursday evening, Oct. 4, with Chateau St. Jean Winery of Sonoma County, each course (Appetizer : pancetta wrapped Ahi Tuna with fingerling potatoes, leek and Chantrell mushroom ragout; salad: pan roasted squab with mache, frisse and pomegranate vinaigrette, served with a teaser of candy striped beet; fennel and ginger soup; entrée: a Silka venison chop and a wild boar tenderloin, accompanied by an Italian baby fig compote with Rosti potato and roasted spaghetti squash; dessert: a selection of handcrafted cheeses, with lychees and Asian pear strudel) accompanied by a harmonious wine. Price: $95, reservations: 775-586-6230. Reception for the dinner begins at 5:30 pm. The second Winemaker’s dinner is scheduled for November 1, with wines from the Brassfield Estate Winery of Clearlake Oaks . . .

Since everyone has already taken the Wine Train, the Virginia & Truckee Railroad has scheduled The First Annual Beer and Brats Train Ride, for Saturday, October 13 at 4 pm. Participants enjoy a barbequed brat with all the fixings, a cold beer and a scenic ride through the heart of the famous Comstock Bonanza mining ruins from Virginia City through the Yellow Jacket railroad tunnel to Gold Hill and then to American Flat. The $35 ticket includes train ride, food and Oktoberfest music (earplugs optional). For more information visit the Virginia City website . . .

On the following weekend (Saturday October 20) the Goldwell Open Air Museum will present a Halloween-themed arts festival Albert’s Tarantella at Rhyolite (4 miles west of Beatty via Nevada Highway 174) from 7 pm – midnight. The event features a performance of “The Methuselah Tree” by Las Vegas’ Cockroach Theatre, modern dance by Threshold Dance Company, new audio tours of Kymaerican Rhyolite by Eames Demetrios, exhibits by Nevada artists, and a Saturday night reception under the stars featuring western entertainer Rodney Leach. Tickets $20 in advance, $30 at the gate . . . Ellen’s Acres is a pre-school age animated cartoon series set in a Hotel “40 miles from Tonopah” in a region of abandoned emerald mines(!); “Finding innovative ways to attract tour groups to the desert 39 miles outside Tonopah, Nevada is a full time job.” . . .

You’ll get a generous dose of cowboy poetry and some cowboy music too, at the 20th Annual Rhymers Rodeer in the Carson Valley Inn‘s Shannon Ballroom November 2 and 3, 2007. The shows will be hosted and emceed by humorist McAvoy Layne in his Mark Twain character. A rodeer, for those who weren’t around when I looked it up last time, is a gathering . . .

And then the 3 Blonde Moms come back the next weekend with comedy about being a mom, having a mom, kids, schools, husbands, in-laws and more . . . We’re all accustomed to finding odd websites, but here’s a dandy. If you make it as far as Gallery 4 you’ll find the Wig Wam Cafe in Fernley and the Sparks Nugget represented . . . Bocce, anyone? Bocce Ball has started up again in the Genoa Town Park. Beginners are welcome. For more information, call 775-901-2114.

Overheard at the Oasis Bar at Ryepatch Dam: “Dancing is like singing with your feet.”