In this episode instead of traveling through the Nevada landscape, we’ll travel back through time.

And in the process we’ll offer a new solution to one of Nevada’s enduring mysteries.

We are in 1934, in Reno, on a wintry night in March. A man is walking carefully on the icy sidewalks toward the center of town. He is Roy Frisch, scion of a prominent Reno family and the cashier of the Riverside Bank. He’s 41, lives at his parents’ large home at 247 Court Street and he’s going to the movies.

He walks carefully down Court Street to Virginia, then north past the bank, which is in the Riverside Hotel at the corner of Island Street. It’s tempting to wonder what he was thinking about as he walked by, crunching the ice beneath his careful feet north across the bridge, the dark Truckee River roiling beneath him. Behind him the bank was roiling just as dark and even deeper.

It is one of the Wingfield banks, and here we pause for a quick background briefing. George Wingfield was a horse racing cowboy who borrowed $200 to get in on the Tonopah boom and parlayed his brains and aggressive nature into ownership of numerous mining properties and other enterprises. Among his associates was a San Francisco gangster named Bill Graham who came to town to manage the Big Casino, Tonopah’s biggest brothel. In the 1920s these Tonopah and Goldfield men moved to Reno. Wingfield now owned banks, hotels and mines around the state. And he didn’t just own politicians, he owned the political parties they belonged to. Graham and his partner Jim McKay ran the famous Stockade, the Bank Club and similar hidden-in-plain-sight enterprises.

They also did some hiding out-of-sight too, providing hideouts for eastern gangsters who needed to chill. Alvin Karpis spent some months in a cabin near Hawthorne, Ma Barker was a customer, and Baby Face Nelson visited to Reno from time to time when he wanted to lower his profile. He sometimes served as a bouncer at the Bank Club, probably out of boredom. Graham and McKay controlled the Reno city council and had friends in every city office who co-operated in keeping Reno crooked.

They had been using the Riverside Bank (located in Wingfield’s Riverside Hotel) as a bunco store where con men all over the country steered their marks. The suckers were escorted right into the busy bank, sat down across the desk from the “President” Jim McKay, reviewed the documentation, received assurances, signed the papers and handed over the money. Roy had handled the paperwork, and he was an eye-witness to the transactions.

for New York, far from their fix. They were indicted for mail fraud.

Roy had had a police guard for a while, but that had ended. And now a subpoena had been issued for him to appear as a witness at their trial. Did he step along a little faster as he turned toward the lights of the Majestic Theater? The cashier didn’t remember selling him a ticket that night, but as he walked home afterward a neighbor saw him a block and a half from home, and they exchanged hellos.

He was never seen again.

When they left town a few days later, it was to team up with John Dillinger, rob midwestern banks and shoot G-Men. The G-Men shot back and killed Dillinger in July, Nelson in October and sent John P. Chase to a life sentence on Alcatraz.

While on Alcatraz Chase told investigators how he and Nelson had watched Frisch leave the theater, and then waited for him near his house. When he reached the corner, Nelson had blocked Frisch’s path with the black Buick sedan he was driving, and then picked a fight with him. He knocked Roy down, and then threw him into the back of the car. They had driven out of town, he said, eventually pulling off the highway near Yerington, where they killed Frisch and burned his corpse.

But when the G-Men took Chase off of Alcatraz to show them the spot, he couldn’t find it. They concluded it was a sham, just Chase fishing for a break and a pleasure trip to Nevada.

That is where the investigation ended, with Roy Frisch’s murder a practical certainty, but his body never recovered.

All that has been known for many years. Now comes the new part.

It is 1966, a warm Reno day in late spring, trees leafed out, the sky blue above Ralston

Street where I sit on the front steps of the Nevada Museum of Art watching my kids visiting Old Mr. Rogers next door. He gave them peanut butter and jelly sandwiches and they were having a nice visit on the porch.

I took him to be a man in his 60s. He had curly hair and a pleasant face, standing in the dappled shade of the towering trees.

I don’t remember his name, or even if he gave it to me, but I remember everything else he said as if it were yesterday.

“I think I can tell you what happened to Roy Frisch,” he said, and when I assured him I was interested in hearing more, he went on. “In that spring of 1934 my partner and I were leasing the Fairview Mine from George Wingfield, and we had closed down production to do some maintenance work. We were working a drift near the bottom of the main shaft and water was collecting in the sump faster than we could pump it out.

“On the morning after he disappeared I was in Fallon picking up groceries and supplies. My partner was in the machine shop, out of sight of the shaft and the hoist house, working on the new pump we were going to install. His wife was in the kitchen making lunch and saw a big black car coming up the road and past the house. There were three men in it, she saw them clearly as the car drove past, the driver and two men in the back seat.

“A few minutes later she saw the car drive out again, with two men in the front seat. She took it that a visitor had been left at the machine shop.

“When her husband came in for lunch she asked him where his visitor was. ‘What visitor?’ he said. He hadn’t seen a car, hadn’t had any visitors.

“When they went outside they could see fresh tire tracks in the snow extending toward the mineshaft and then in a big loop back to the entrance. 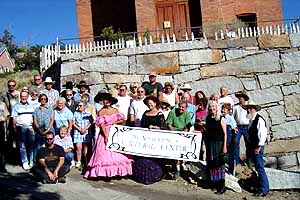 “They told me about it when I came back from Fallon, but we decided the third man must have been in the car after all and didn’t think any more about it.

“We installed the new pump and it was a big improvement. So we went back to work, drilling and blasting, just the two of us; one in the drift down below, one working the hoist at the surface.

“But after a few weeks the pump started to act up. It had a gasoline engine, and it pumped the mine water through the cooling jacket, but the filter kept clogging up with some kind of gummy fibrous material. It would start all right, and run fine for a while, but then the filter would clog again and it would heat up, and I’d have to take it apart and clean it of this stuff I’d never seen in a mine before.

“Over the course of a few days the clogging decreased and finally stopped completely, but I was curious about this stuff and I set some aside. I thought maybe we’d run into more of it.

“At that time there was a doctor in Fallon who had come out from New York for a Reno divorce, liked it here and set up a practice. He had also built a fairly sophisticated laboratory, and so I took this stuff to him. He didn’t have any idea what it was, just a wad of brown stuff, but he agreed to look into it.

“When I stopped by the next week, I asked him if he’d been able to identify the stuff.

He’d never told anyone but me, he said. At the time, weeks after the disappearance, his partner and his wife convinced him they didn’t want to get involved in anything involving George Wingfield and Baby Face Nelson. So this is the first time the story is told publicly.

At the time I heard it, it was already impossible to verify it. I might have written down names; his, his partner’s and the wife, the Fallon doctor . . . but I didn’t.

But even with that information there’s no way to have proved Roy Frisch’s body was dumped there. Even with unlimited resources and easy access to the mine, what kind of evidence would have survived 32 years in the water at the bottom of the shaft? But I believed the story when he told it to me and I believe it now. If anyone asks you, Roy Frisch’s corpse was dropped down the shaft of the Fairview Mine on the morning after he vanished.

The Nevada Commission on Tourism has launched a series of new national ads featuring Wayne Newton in waders, Elvises on mountain bikes and showgirls on skis in an effort to show the world that there’s more to the state than Las Vegas. And the NCOT website is being overhauled to good effect.

Quick notes from beyond the mountains: There’s a cattle drive in the works for the 26th, 27th, 28th, and 29th of September. A thousand head of cattle will be moved from about 20 miles south of Vya at a place called Home Camp, to Lake City California arriving on Saturday the 29th with an “End of Trail” party afterward at the fair grounds in Cedarville. Dr. Larry Milham of the Old Yella Dog Ranch will be the trail boss and you can saddle up and come along too. More info from the Surprise Valley Chamber of Commerce in Cedarville (530-279-2001) . . . You can own Eureka. The Owl Club, a Main Street landmark, is for sale, including its non-restricted gaming license for slots and table games and liquor license. The Eureka Best Western down the street is also for sale, and for that matter the Jackson House is too. If you’ve got a steamer trunk full of 100s, this may be what you’ve been waiting for — call Ron Carrion at 775-318-0325. Eureka is 77 miles west of Ely and 64 miles east of Austin on US 50 and is one of the most attractive communities in the state . . . Virginia City has a great news site, check it out.

Overheard at D’Vine’s in Carson City: “You can only be young once, but you can always be immature.”