I’m still unpacking from a 9-day, 1400-mile trip through the sagebrush. Some highlights:

In Hawthorne people were already buying red, white and blue petunias to plant in their gardens for the Armed Forces Day celebration, always held on the 3rd weekend in May. Hawthorne is Nevada’s Mayberry, comfortable and drowsy (except when the wind is blowing 90 mph), but it bristles with guns, bombs and missiles in the big Armed Forces Day Parade. Hawthorne has been home to the military ammunition dump since Lake Denmark New Jersey blew up in 1926. First operated by the Navy, and then by the Army, it’s now a civilian-managed concern operated by Zimmerman & Day. The last recorded explosion here was in the early 1990s when one of the bunkers went up after a summer thunderstorm.

Tonopah is pleased as punch about the Mizpah Hotel coming back to life, but the opening date is uncertain as the entanglement from bankruptcy proceeds. Nevertheless it is clear that new owners are intent on bringing the old hotel back in the high style intended by Frank Scott. Scott was the Las Vegas builder who fell in love with the old hotel as a kid. He bought and restored the old hotel in 1979, only to see it rushed to open before it was completed on account of a mining boom that overtook the old city.

Guy Rocha writes from the State Archives in Carson City: “Working with the Nevada Dept. of Business and

Industry, Mechanical Unit, my research indicates that the oldest, operating electric passenger elevator in Nevada is found in Tonopah’s Mizpah Hotel. The Otis Elevator Co. built the elevator in 1907. The Goldfield Hotel also has an electric passenger elevator. However, it has not been operating for many years. The Goldfield Hotel last closed in Oct. 1945.”

Lester O’Shea built a free-standing elevator shaft behind the Goldfield Hotel when he attempted restoration in the 1980s, but it’s unlikely there’s an elevator in it. The original elevator is still in place too. Lots of restoration activity in Goldfield, but none visible at the hotel yet, despite an optimistic new owner last summer.

I whizzed through Beatty too quickly to notice much except the new paint on the Beatty Club.

Pahrump looks more like a young Las Vegas every day. It is hard to find the distinctive blue-roofed tower of the Pahrump Winery among the roofs of the new homes that surround it now. The winery that Jack Sanders built has new owners. They have added a major RV Park with the winery as its centerpiece. Jack Sanders, meanwhile, is building a new Sanders Winery at the Villa Teresana. What will be a green and gracious Tuscan-style vineyard and winery is now a large tract of bare dirt bristling with survey stakes, enclosed by a formal iron fence. When Kellogg Street is extended, it will be the first exit from Highway 160 on the

An April morning in Pahrump and the breeze is stiff and crisp from the northwest. Palms are trembling and waving their fronds, flags snap straight out from their lanyards, and the mountains to the west stand sharp and stark against the sky. Who wouldn’t like it? But during the morning the wind increases, and by noon it is daunting, with sand blowing in the air and doors blocked against it.

From Pahrump I drove to Overton. Big change, from bustling boom town to quiet village. Overton is a great place to sleep, and you can choose from the restored classic Plaza Motel on Main Street or the Best Western on the north end of town. Overton is also home to the intriguing Lost City Museum, with its recreated Anasazi pueblo to explore.

Overton to Pioche is another big change, from lowland farm town to a silver mining town in the mountains. Along the way US 93 passes through the lush Pahranagat Valley with its beautiful lakes, one of Nevada’s most beautiful spots, and in the mid-19th century a favorite pastureland for horse thieves from four states and territories.

Caliente is so different without the railroad switching yard in the center of town — not only is it quiet, but the two business blocks now have a clear view of one another. The transformation of this remote hamlet into another Sun Valley was planned but never consummated, but it attracts many summertime visitors to the state parks in the vicinity. Cathedral Gorge in particular is a unique attraction and popular destination. What separates this smallish wash from countless others in this wild country is that its walls are made of a chalk-soft suede-textured tan bentonite clay which has eroded into a fantasyland of intricate shapes. Cathedrals, yes, and wedding cakes; fortresses and hunchback men; pillars and dragons; palaces and melting elephants; baroque architectural creations and structures as yet undreamed of — lacy, filigreed, fluted and feathered. A Visitor Center at the entrance to the park is open from 9 to 4 daily.

Next time, the rest of the journey: Pioche, Baker, Ely, Eureka and Austin. 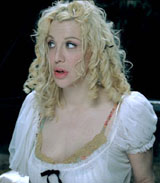 Weird celebrity sighting: No, it’s not Melvin Dummar again, it’s Courtney Love, the diva of grunge. She was spotted at Harvey’s Lake Tahoe the other day and I’ll bet you can’t guess what she was doing. No, no, and no — She was conducting weddings, as in “With the power vested in me. . . .” and when she was done, 22 couples of the traditional male-female configuration had been converted from single to married. But why? The folks at Harvey’s are just as baffled as you and I.

Overheard at the Alamo Club in Pioche: “The Main problem with life is there’s no soundtrack, so you’re never quite sure how to feel.”