I don’t quite know how to introduce the strange place in the desert we visited early in July. 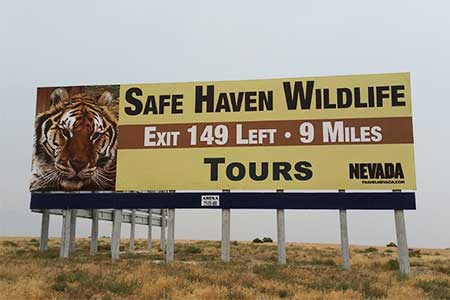 It is only ten miles off Interstate 80 at Mill City but far removed from what you expect to find in the Buena Vista Valley. It’s called Safe Haven Wildlife Sanctuary. You’re welcome to visit, but call ahead first — 775-538-7093 — to make sure the gate is open. From Mill City drive south on Nevada 400; about 10 miles along you’ll pass a small tan cinderblock structure on the right and then take the first road to the right, maybe a quarter mile farther on.

This graded gravel road leads straight to the base of the mountains, but the marked turnoff to Safe Haven is about a half-mile along. Pass through the gate as pre-arranged and continue to the small compound that is headquarters for the fenced and double-gated retirement community for wild animals unfit for the wild. 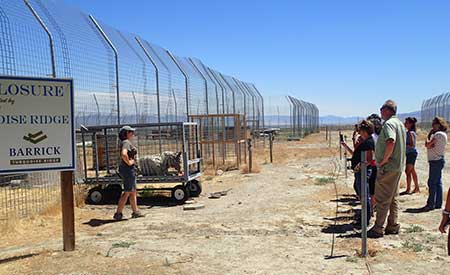 It is not a zoo, it is a refuge. For a variety of reasons — defanged or declawed, born in captivity — the animals here can’t survive in their natural habitat. The tigers, the bears, the lion, the coyotes and the various cats will live out their lives here.

The extreme fencing is one of many requirements imposed to ensure the animals don’t wander off. The enclosures are quite spacious, furnished with shade and climbing platforms, and constantly overseen and maintained by a paid staff of two and as many as five interns depending on the season.

Demanding as the care and feeding of the residents can be, raising the money that pays for it isn’t easy either. 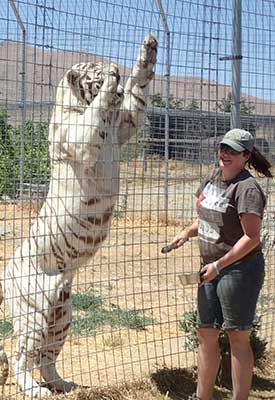 Corporate sponsors include mining companies active in the area and a number of foundations that have supported the effort since it relocated here in 2006. In addition to the daily tours described at right, fundraising events include a Full Moon Tour just completed (Snores ‘n’ Roars), and a Tee off for Tigers golf tournament held at Reno’s Arrowcreek Country Club on Saturday, September 29.

This story began more than 20 years ago when Lynda Sugasa was driving in rural Illinois and saw a little raccoon lying beside the road. She stopped and began a frustrating search for help that taught her how little help is available for injured wildlife, and how hard it is to find.

She eventually located an animal rehab center where the raccoon was taken in and by the time it was released back into the wild, Lynda had enrolled as a volunteer. There she helped heal and rehab the local wildlife brought in for treatment: orphaned fawns, injured opossums and flying squirrels, all kinds of critters to be restored to health and released back into the wild.

In 1998 Lynda and her husband David established the 5-acre Safe Haven Wildlife Sanctuary in Illinois, and for the next eight years they cared for and reintroduced hundreds of native fauna, and took in an increasing number of abandoned and surrendered exotics. These can’t be reintroduced to their original habitats even if they haven’t been declawed and/or defanged by previous owners, because they’ve become habituated to humans and lack appropriate fear, or they’ve never learned survival skills in the wild.

The required security improvements and the space limitations impinged on the operation. David Sugasa had been baptized in Winnemucca and has relatives in Lovelock; his awareness led them to Buena Vista Valley.

In the dozen years since they arrived, Lynda, David, the Board of Directors, the interns and volunteers have made the Refuge into a highly respected, fully licensed and accredited facility that receives rescued animals from all over the USA and around the world. Neighboring ranchers, wary at first, have become enthusiastic supporters.

Make a visit to Safe Haven, maybe you will become a supporter too.

Overheard at Cafe Del Rio in Virginia City: If you break your neck, if you have nothing to eat, if your house is on fire, then you’ve got a problem. Everything else is an inconvenience. Life is inconvenient. Life is lumpy. A lump in the oatmeal, a lump in the throat, and a lump in the breast are not the same kind of lump. One needs to learn the difference.

What They’re saying About Us: “Let’s make Hoover Dam into a giant battery.”