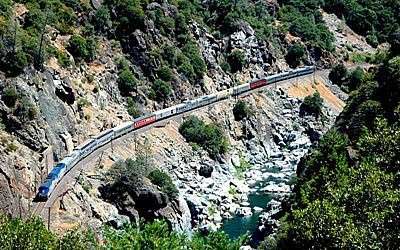 The 34th National Cowboy Poetry Gathering is scheduled for January 29-February 3 next year. Its theme will be “Basques and Buckaroos: Herding Cultures of Basin, Range and Beyond” and tickets will go on sale to Western Folklife Center members on September 5. The line-up for the Gathering will be announced this month and the ticketed shows and workshops will be announced in early August.

And for the first time that I’m aware of, there will be a special ‘fun train’ called the Cowboy Express coming from the Bay Area. The announcement reads, “We invite you and your family to travel with us by private charter train from the San Francisco Bay Area, Sacramento region and Reno/Carson City areas to Elko, Nevada to enjoy the 34th National Cowboy Poetry Gathering.”

On the eastbound leg the train departs Emeryville in the East Bay at 7 am on the morning of January 31, and takes the Feather River route made famous by the California Zephyr with its trademark VistaDome cars. That leg ends at Portola, buses bring the travelers to Reno in time for a 4:30 departure for Elko, arriving at 9:45 pm.

“Why fight the icy and snowy roads over Donner Pass and across the Nevada desert,” the invitation reads, “when you could ride in comfort onboard our Cowboy Express made up of private rail cars dating from the late 1940’s and early 1950’s during America’s classic streamline era for passenger trains. Each passenger car has been refurbished to its original condition. Step back in time and enjoy our classic train which includes coaches, lounges, domes and Pullman cars for your exciting train riding experience.”

The westbound train departs Elko at 8 am on February 4, reaches Reno at 1:30 pm, climbs the Sierra, crosses over Donner Pass to arrive in Sacramento at 7:15 pm and to Emeryville at 9:10 pm.

Pricey, as you’d expect but an unforgettable railroad experience with all that cowboy poetry in the middle.

Comstock Mining Update:
Those of us who live on the Comstock know how rich our communities are in what matters most: friendships, co-operation, love and respect for our neighbors.

That’s why CMI’s presence here struck such a sour note from the beginning. Our corporate neighbor for the past 7 years has never made a friend, has never shown respect for its neighbors. CMI is an intruder, a self-serving braggart that has imposed its disruptive heavy industry on our peaceful towns over the protests and resistance of the local people.

CMI never earned our trust. Instead it has wooed the County Commissioners in Lyon and Storey Counties, persuading them to ignore the local residents in favor of the mining industry’s gaudy promises.

Clandestine meetings with some Lyon County Commissioners and the Commissioners’ subsequent votes hare resulted in two lawsuits now before the Supreme Court. In Storey County the County Manager in a public meeting announced Storey County would no longer enforce the company’s long-standing Special Use Permit so that it could then run haul trucks on the public highway. Ore trucks on the road we all use every day!
If Storey County’s officials had lived up to its commitment to the public, that could have been the end of CMI’s sad story. But that is not the Storey County way.

Instead, the landscape above Devil’s Gate has been ripped away and the pit was dug deeper and deeper — until the fragile east wall collapsed and the highway fell into it. After all this, at a cost of $200,000,000 of investors’ money, the company still hadn’t made a dime. 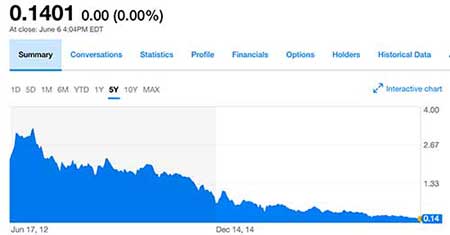 In September 2012 CMI share price was $3.27. On May 25th 2017 the stock opened at 17 cents and the mail brought a notice from the SEC: “The Company’s securities have been selling at or below $0.20 per share since April 27, 2017, and, pursuant to Section 1003(f)(v) the Company’s continued listing is predicated on demonstrating sustained price improvement or effecting a reverse stock split within the next six month period, that is, no late than November 27, 2017. The Company is required to stay in contact with the NYSE and discuss any new developments, regarding progress on its strategy, plans for implementing a reverse split or otherwise.”

The company’s annual meeting was held June 1 at the Gold Hill Hotel (on the market for $900,000, reducd from $1.4 million; the company is peddling the properties it was buying up as the stock was on its way down) and the SEC Notice was announced. Also in the Notice: “The Company’s common stock will continue to trade under the symbol ‘LODE’, but will have an added designation of ‘BC’ to indicate that the Company is below compliance with this NYSE MKT’s listing standard.”

BC are the NYSE’s scarlet letters, and CMI shares are wearing them now. Here’s the company’s filing.

CMI’s golden promises have proven empty, its pretenses and posturings recognized for what they are. Its death rattles will no doubt continue for a while. Will it carry out the reverse stock split to pump up the share price? Probably, since that will prolong the struggle — and the paychecks for company executives will continue uninterrupted as long as there’s a dollar left in the till.

It’s not just the locals who are glad to see CMI go down. Reaction on the Yahoo message board has been brutal:

“I can’t believe there are still suckers here posting on the LODE/GSPG board and still buying this #$%$” Skull Krusher posted. “Gold is a great investment and there are many great mining companies but unfortunately for you all, LODE is certainly not one of them. The BS this company has put forth over the past 10 years is incredible but I guess there is a sucker born every minute. The CEO De Gasperis has not provided any increase to shareholder value since he’s been here. How does a CEO stay on board for so long under these conditions? He’s a well trained financial manager and that’s his value to Winfield because he is adept at keeping the financial engineering going.It’s not about mining for gold. It’s about mining your pocketbooks.”

Yahoo Reader wrote, “Gold keeps rising and CEO Gasp.Corr keeps smiling, while shareholders are gleefully left to suffer. This is so pathetic, and the company needs a complete revamping….NOW!”

From the previous week:
“Watch what happens now. leading up to the sure to come reverse split, the pps will probably be manipulated higher and higher. shareholder value and share price are now at all time low.”

“what a week! just when you didn’t think things could get worse, it does. and management just sits back and picks up paychecks and no worries about pps or the shareholders.”

Dreez: the former home of Biltoki in Elko has been attractively revamped by new owners. More about it here:

Capriola’s store in Elko has an item in its inventory that I find irresistible (Or did until we upgraded to a new RV with a bed in it): 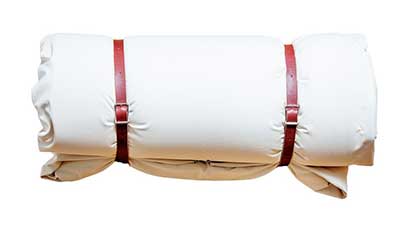 The classic Cowboy Bedroll. Who doesn’t want one of these?

Western water managers are dong their best to juggle competing issues throughout the Sierra Nevada watershed. Concerns about burgeoning reservoir storage and dangerous, potentially damaging downstream water flows have operators watching air temperatures closely for spikes in the snowmelt. Click here to see this Spring update for the Tahoe Sierra.

Overheard at Sharkey’s in Gardnerville: “If they can get you asking the wrong questions, they don’t have to worry about the answers.”