One of the most memorable episodes in “Roughing It” recounts how young Sam Clemens hiked up to Lake Tahoe from Carson City. 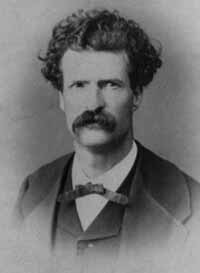 He told how he and his companion staked a timber claim and accidentally set the forest on fire. The two escaped with their lives by rowing their skiff out into the lake and waiting for the flames to die down.

But for all its admirable qualities as prose that flirted now and then with poetry, Twain’s description of his Tahoe excursions — he actually made two visits to the lake, but conflated them into one in his book — lacked

geographical specificity, and scholars ever since have wondered just where it was that he had made camp. Speculation placed the camp at several different places on both the Nevada and California sides of the lake. But it was just last summer that a group of curious Twainiacs figured out exactly where it was.

Lead investigator in this effort was Bob Stewart, who had already become conversant with Clemens’ Nevada adventures from the research he did for his book “Aurora, Nevada’s Ghost City of the Dawn”.

Here we diverge from the usual narrative path of these Nevadagrams. There are four main parts of the story, and each one is linked in order below. 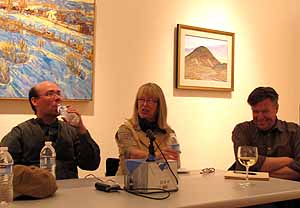 They each open in a new browser window, so you can move through the series by returning here and clicking the next link in order, and then either closing the new window or setting it aside and returning here for the next one.

Chapters XXII and XXIII in Roughing It by Mark Twain.

Making it Official by McAvoy Layne

In the waning days of January we realized that one of the great art events of the year was taking place only an hour away at the Oats Park Arts Center in Fallon: an exhibit of paintings by four northern Nevada artists — John Bogard from Planet X near Gerlach, Jeff Nicholson and Jean LeGassick from Silver City and Ron Arthaud from Tuscarora — plus an hour’s public conversation with them led by Bill Fox of the Nevada Museum of Art.

The paintings are magnificent and the painters’ talk was entertaining and even edifying.

The show will be up through March 11.

If you are anywhere near Fallon before then, do your eyes a favor and make a detour to point them at this exhibit. This is Nevada art at its highest level. Spectacular!

Our group of six stayed over and had breakfast at Jerry’s the next morning. We all wanted to go back over to the center and look at those paintings some more.

Quick notes from beyond the mountains: The Nevada Northern Railway in Ely is offering“Winter Steam Spectacular Photo Shoots” the first two

weekends in February, details here, and the debut of the Be Mine Valentine Limited, Valentine’s Day Train on Monday, February 14.

With seating for just 20 couples, this exclusive train will feature an intimate, romantic ambience. Passengers will be treated to aphro-disiacs, including chocolate truffles and cham-pagne. Beer, sparkling cider and soft drinks will be available. Rumors persist that the train may make its way through the “Tunnel of Love,” though they may be just eager fantasies.

Spouses, friends, and lovers, those infatuated and significant others are encouraged to get tickets now, as seating is extremely limited aboard this romantic train. Tickets are just $64 couple ($59 for White Pine and Eureka couples). The railroad has posted this disclaimer: “The Love Train of Old Ely assumes no liability for anyone who becomes love struck during this ride and, certainly, magical things have been known to happen at this sentimental time.

In fact, anyone wishing to get married aboard the train or renew vows, please call the NNRY to make arrangements. Board the train for a memorable evening of nostalgia and romance – don’t let the moment pass. We look forward to having you ALL ABOARD!” . . . Roadside America subscribers were alerted to three noteworthy Nevada oddities in the latest bulletin: the world’s largest chocolate fountain at the Bellagio and the Hawaiian King Kamehameha Statue at the Hawaiian Marketplace, both on the Las Vegas Strip, and the Wilbur D. May Museum in Reno. If you visit the site you’ll find plenty more Nevada goofiness represented . . .