Despite its affinity for famous people from Kit Carson to Frank Sinatra, Nevada has relatively few notable natives. Even Wayne Newton came from somewhere else. How many Nevada-born celebrities can you name?

Emma Nevada was a famous Opera singer in her day, born in Austin. Wovoka, the originator of the Ghost Dance, grew up in Yerington. Who else? Nevada hasn’t provided the USA with a president yet, but Pat McCarran was a national figure in the US Senate, as was Paul Laxalt a generation later, and now Harry Reid, all Nevada-born. We’ve produced actors, artists, athletes, authors and others in the public eye, but very few true celebrities on a national scale.

So when I first made her acquaintance at the Humboldt Museum I was surprised that a Hollywood movie star could be so completely forgotten in her home state. Even the millions who had seen her over and over again, as Charlie Chaplin’s leading lady in the movies that established him as a star of the first magnitude, scarcely knew her name.

Who? Edna Purviance, born October 21, 1895 in Paradise Valley and reared in Lovelock, left for the bright lights of the big city — and became a movie star in Hollywood. Wouldn’t you think Charlie Chaplin’s co-star would be remembered here? She isn’t.

It didn’t seem right to me that she be so forgotten, and with the encouragement of Linda Wada, the world’s leading authority on Edna and her life, Jim McCormick (a ruthless slavedriver in the guise of a benevolent old professor) and I decided to honor her on the occasion of her 115th birthday with a party at the Martin Hotel in Winnemucca.

A local man wrote to me after our visit: “Growing up a couple hour’s horseback ride from Paradise Valley, or just ‘Paradise’ as we called it,

we never imagined that any glamorous movie star from there could inspire an annual posthumous birthday pilgrimage, complete with mini movie festival. But watching Edna in all those early silent Charlie Chaplin movies, I couldn’t help feel that Paradise was the perfect place to produce such an antique beauty.”

In “The Tramp” we saw “the little fellow”, as Chaplin called his famous creation, save young Edna from a terrible fate. And after he was set upon by the crooks and knocked acrobatically around, we watched Edna nurse him back to health. We saw “The Vagabond”, with further exercises as “the

little fellow”, and “Burlesque on Carmen” which was, um,well, you know. Charlie played Darn Hosiery, and Edna, of course, was Carmen.

Earlier in the day we had made the 45-mile drive to Paradise Valley, the enchanted village where Edna was born in 1895. If Edna has been rediscovered by a few of us here and there elsewhere in the world, she’s still forgotten in Paradise Valley.

No-one we met could say where she lived exactly; the name wasn’t familiar. But we must have seen her childhood home, because we saw every structure in town. We saw the Paradise Bar inside and out, with nourishment and refreshments enjoyed in the process.

We also drove north and east out of Paradise Valley to Martin Creek in search of the flour mill that had attracted Madison Gates Purviance from Idaho to this little community in the waning years of the 19th century. We didn’t find that either — someone seems to have switched the geography around since we were here last — but we soaked up the atmosphere and made a mental picture of those long-ago times when Edna was a little girl here.

It wasn’t much different from today, except no pavement on the roads back then, and maybe a little busier. But almost all the buildings we see are a hundred years old or more. There are some manufactured homes and other modernities, but the overall ambience is of a small town of 120 years ago, stuck in . . . not amber but fresh air.

We met in the early evening at the Martin for a convivial gathering, and then adjourned to the banquet room in back for our dinner and the program of talk and movies. Those of us returning to Reno via Amtrak were up at 4:30, aboard the westbound California Zephyr at 5:15 and back in Reno at 8:30.

I’m confident that this was the finest birthday party Edna’s had in many years, and because it was such a spontaneous and heartfelt expression of high regard for her achievements, maybe it was one of her best ever.

It was certainly an enjoyable evening for us, and it has had a curious effect on me. Since that night I have felt supercharged with energy and some kind of low-level psychic excitement that provides focus and clarity far beyond what I’ve been experiencing lately.

I’m a huge skeptic about matters of spirits, ghosts and the supernatural, but I will accept the idea that I’m getting the benefit of all the good vibrations that were created by the generous spirits in the room that night. I hope everyone else who was there got a good dose of it too. For that we can surely thank Edna.

Does the pioneer era seem a long way back in time? Sometimes the combination of antique clothing styles and horse-drawn transport suggests that the people using them are different from us. This news story from the Goldfield NEWS of July 28, 1905 suggests that people haven’t changed all that much in the past hundred years or so (to be fair, there were automobiles in Goldfield in the summer of ’05)

Quick notes from beyond the mountains: In the small counties of the state, some cautious citizens make a point of gathering bumper srickers from all the candidates in the local elections. Then, when the results are in, they slap the winners’ stickers onto their cars and pickup trucks . . .

Sourdough Slim will be appearing at the Death Valley 49ers Encampment November 10-16, and at the National Cowboy Poetry Gathering in Elko . . . And now in a different musical direction: the dynamic cross over quartet, Break of Reality — three classically trained cellists and a percussionist — presents works from Bach to Metallica and back again at 8 pm Saturday, November 13 in the Barkley Theatre at the Oats Park Art Center in Fallon. 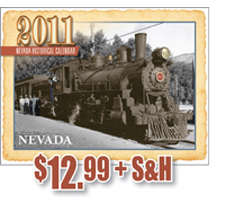 The band will also hold a free and open-to-the-public informal conversation on their sources and inspirations at 3 p.m. on the day of the performance. Doors open at 7 pm and there will be a non-host bar; $17 for CAC members, $20 non-members, $10 children/students. Call 775.423.1440 for more info . . . Nevada Magazine sends word that the 2011 Nevada Historical Calendar has been printed and is ready to ship. To order yours, e-mail, call 775-687-0603 or buy it online. Nevada lovers prize this calendar for its large format historical photography from around the state . . .

Boulder City‘s Nevada Southern Railway will be operating on Friday November 26th (the day after Thanksgiving Day); departures will be at 10:00, 11:30, 1:00, 2:30. And you can order your tickets in advance for the ever more popular Santa Train, running on December 4 and 5, and again on December 11 and 12) . . . Jim Higgins writes from Primm: “Over the past month, Las Vegas has been highlighted on a new Wednesday night TV show on CBS. Previous Vegas-based movies and TV shows have thoroughly covered casinos, hotel rooms, strippers, dive bars and porn stars. The Defenders showcases one more Vegas institution that has thus far been underrepresented: billboard lawyers. In The Defenders, Jim Belushi and Jerry O’Connell play a pair of fast-talking (but upstanding) lawyers based loosely on real local attorneys” . . . Also in Las Vegas, the breakfasts at Lou’s Diner at Alta & Decatur behind the Walgreens are getting rave reviews on Facebook . . .

Overheard at the bar in The Winnemucca Inn in Winnemucca: “Trouble’s just another side effect of drawing breath.”