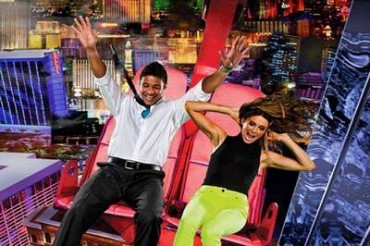 How often do you visit the Rio Hotel & Casino? You might be missing out if you have not taken a tour of this just-off-the-Strip location. It’s easy to get to if you’re not driving. They have a free shuttle bus that runs every 30 minutes from 10 a.m. until 1 p.m., and you can pick it up at either the Sports Book side of Bally’s or in front of the Front Lobby at Harrah’s. The return trip pickup is by the Carnival World Buffet.

While you are there check out the Voodoo Zip Line, located up the escalator in the Masquerade Tower. The line runs between the Rio’s two towers, some 490 feet in the air, from the 51st floor Voodoo Lounge. This is a good place to start if this is your first attempt “zipping.” It is controlled and will take you forward and backward, and you have plenty of time to look out at the great views. It is open 7 days from noon until midnight for $27.49 a ticket, and re-rides are $17.49. Hints: (1) Check out Groupon for a discount. (2) If you get the GoPro video done on the SD card, make sure you have them check when you get back to the 1st floor to see if the whole trip was recorded. Otherwise, you should get another ride with another recording, and check the SD on this trip too! (3) You can’t take anything on the ride, including glasses and flip flops, so use the free small lockers on the top floor by the ride. You will pay for the lockers on the 1st floor.

If you have the munchies after your ride, head on down the walkway to Burger King. Yeah, I know, “Burger King?”, you say? You might have seen a few of the BK Bar’s across the country. If not, that’s right, BK now serves beer at a handful of locations! Right now you can add a beer for $4 with your burger purchase. 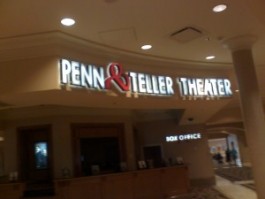 The Penn & Teller Theater is known for the renowned illusionists who were performing on Broadway this summer. They returned to Las Vegas on August 22 for their 9 p.m. shows nightly, dark on Thursdays and Fridays. The World Series of Poker’s November 9 is scheduled in the Penn & Teller Theater starting November 8th. Tickets are free for this event; however, you will have to camp out in line hours before the event to see if any tickets are available. Tickets are first given to the November 9 winners for their family and friends, and they enter at 11 a.m. After that, there may be seating open for first come first serve.

If you do get there early, try Hash House A Go-Go for breakfast. Great food, great prices and great service. It is located between the lobster tank and Penn & Teller Theater.

I consider myself a perfect gentleman in almost every way, but sometimes my wife throws me in the doghouse. What can I say? It comes with being married. But now, thanks to Michael and Jenna Morton at CRUSH inside MGM Grand Hotel & Casino, I have found a new way to say “I’m sorry” and it’s only going to cost me $1,000. CRUSH has a special four-course ‘Forgive Me’ prix fixe menu prepared by Corporate Executive Chef Billy DeMarco. The apologetic make-up menu begins with chilled Oh Toro tuna with white Alba truffles, followed by Loup de Mer sea bass with Russian beluga caviar. The main entrée is Kobe beef ribeye and spiny lobster tail. The meal concludes with Dom Pérignon Rosé Champagne and gold leaf covered chocolate strawberries. Being in the doghouse never tasted so good. 702-891-3222.

The closest I’m going to get to the presidential race in the coming months is the DJT Lounge (DJT is Donald J. Trump) at Trump International Hotel, across from the Fashion Show Mall on North Fashion Show Dr. That’s where Master Mixologists Antonio Olvera and Andrew Almanza are creating innovative drinks and where traditional cocktails are getting a makeover.

“It’s all about the ingredients,” said Almanza. “Summer fruit is at its peak and that gives the cocktail its many layers of flavors. For instance, the Watermelon Basil is sweet watermelon juice that complements the basil in an infusion with Ciroc Red Berry Vodka. At the same time, you can taste the fresh pineapple and orange juice that is in the drink.”

In addition, the mixologists keep a running list of special “off-the-menu” drinks made previously for specific clientele and documented as visitor favorites. They are only offered by
special request. Go ahead and request. 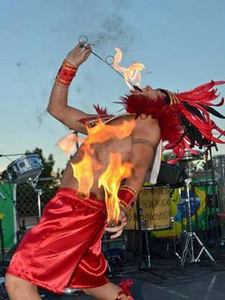 Via Brasil Steakhouse Hosts Outdoor Brazilian Festival: The 2015 Brazilian Outdoor Festival is returning to Via Brasil Steakhouse at the Ft. Apache Commons Shopping Center in Summerlin on Sunday, Sept. 20 from 4 to 10 p.m. This event focuses on the South American culture with traditional Brazilian food and drinks, live music, samba dancers, stilt walkers, Capoeira performances performances – an art that mixes martial arts and dance – plus fire dancers and fire breathers highlighting the entertainment lineup.This year the event ticket sales will benefit Opportunity Village. Advance general admission tickets are on sale now through Sunday Sept. 13 at Via Brasil Steakhouse for $10 and after that $12.

Tule Springs Fossils Return to Nevada: In 2002, around 10,000 fossil specimens were excavated from the Upper Las Vegas Wash by scientists from San Bernardino County Museum where they have since been curated. In June, the fossil collection was legally transferred from the Bureau of Land Management to the National Park Service, and the fossils were transported from California to the Nevada State Museum, Las Vegas, where they are now exhibited. The collection of specimens includes Columbian mammoths, camels, bison, saber-tooth cats, horses and llamas.

Anastasia to publish the book “Gotti’s Rules: The Story of John

Alite, Junior Gotti and the Demise of the American Mafia.” This Author Talk is free with museum admission and free for Museum Members. On Wednesday, Sept. 23, at 7 p.m., the Mob Museum will present its next Courtroom Conversation: “Fighting Organized Crime in the 21st Century.” The event is made possible by a grant from Nevada Humanities. The museum has assembled a panel of national and regional experts on organized crime including: Virginia Commonwealth University Professor and Criminologist Jay S. Albanese; Assistant Special Agent in Charge Patrick G. Brodsky of the FBI’s Las Vegas Division’s Criminal Branch, Support Services Branch and SWAT; and Thomas P. Ott from the U.S. Treasury Department’s Financial Crimes Enforcement Network. Tickets are $25; museum members receive a 10 percent discount, call 702-229-2734 for information.

Famous TV Comedy Writer Ken Levine Visits Las Vegas: Writer Ken Levine, the name behind some of TV’s best comedies “M*A*S*H,” “Cheers,” “Frasier,” “Wings,” The Simpsons,” and “The Jeffersons” has written more than 200 episodes for network television. Levine will visit and share anecdotes from his road to success during his talk “By Ken Levine” at 7 p.m. on Wednesday, Sept. 2 at 7 p.m. at the Las Vegas Academy of the Arts Lowden Theater downtown. His visit will be a fundraiser for the nonprofit Doberman Rescue of Nevada. Tickets are $29 and $49 through Eventbrite.