The Hawthorne Tornado: The first damage done by the tornado was out at the “Base,” Area 49, just east of town. A building there sustained not only roof sheeting damage, but the structure (roof trusses) was damaged, too.

The first structure hit as it came into town was a billboard. It virtually blew up and was severely damaged. Across the street, it struck two mobile homes back to back.  Another billboard 50 feet to the south of the swath was untouched.

Continuing along the north side of 5th street (Highway 95), the tornado was cutting across the parking lot of the Monarch Motel when a gal opened the door to her room, face to face with the funnel.  It blew the windows out and part of the roof off, but she was unscathed.

Right across the street to the west, 82-year-old Wilma Moody was sitting in her wheelchair while, in seconds, half of her roof blew off, collapsing part of her east wall. She was, remarkably, unhurt.

The twister continued westward, tearing out a tree and then turning over a 20-foot long steel cargo container. Next, the tornado made a couple of doglegs and tore off the front of the Old Nevada Pizza building, while a 4 x 8 plywood sign was leaned up against the building across the street — and it didn’t budge.

No one was hurt, and within minutes locals were out helping those in need. 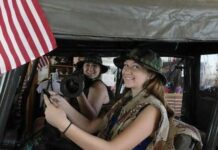