If you’ve ever visited the Carson Valley in your lifetime, you can probably still see it clearly in your memory.

The broad green valley, speckled with grazing cattle, made lush by rivulets from mighty granite cliffs shoved up into the western sky, craggy summits white with snow. That’s in the spring or the fall; in summer the snow is gone from the peaks, and in winter the snow descends to the valley floor from time to time.

In any season it is surprisingly, unforgettably beautiful.

The first person to say so to the world was Horace Greeley, of all people. He came early on, riding a mail wagon west from Salt Lake City in 1859 — before Sam Clemens even — and sent a dispatch back to his newspaper, the New York Tribune, when he arrived in Placerville. 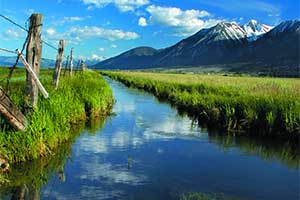 “I had previously seen some beautiful valleys,” he wrote, “but I place none of these ahead of Carson. I judge that portion of it already in good part under cultivation, about thirty miles long by ten to fifteen wide. . . . This valley, originally a grand meadow, the home of the deer and the antelope, is nearly inclosed by high mountains, down which, especially from the north and west, come innumerable rivulets, leaping and dancing on their way to form or join the Carson. Easily arrested and controlled, because of the extreme shallowness of their beds, these streams have been made to irrigate a large portion of the upper valley, producing an abundance of the sweetest grass, and insuring bounteous harvests also of vegetables, barley, oats, etc.”

This was the first part of Nevada to be settled. Brigham Young was aware of the region since John Reese established Mormon Station at what became Genoa, and he sent settlers to establish farms. A few years later he called them home to Salt Lake City to protect Deseret from federal invasion, and though a few stayed put, most of them returned, abandoning their farms which were then taken by ‘gentiles’.

Greeley happened through just as these newcomers were meeting to establish local government at this far edge of Carson County, Utah Territory. Nevada Territory was formed in 1861 with Carson City as its capital and when Nevada was made a state in 1864 Genoa was continued as the seat of Douglas County government.

Gardnerville was established in 1879 at a more centrally convenient location for the farmers in the valley. Next-door neighbor Minden was created when the V&T Railroad extended its rails south from Carson City, and became Douglas County seat six years after a disastrous fire at the county poor farm spread to take much of Genoa in 1910. 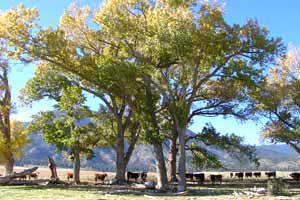 When travel was by wagon, each crossroad had a name and a saloon, but at 45 mph we tend to think of the Valley as a single entity, with neighborhoods called Genoa, Gardnerville and Minden.

The early history of this far western corner of Nevada is now one of its principal attractions. Genoa especially dotes on its past and so we began our visit there. Coming from Lake Tahoe, take the Kingsbury Grade over the spine of the Sierra and swoop down into the valley on an easy descent offering spectacular views. This was once a steep, rocky stagecoach road — the very road that Horace Greeley took to the lake on his way to Placerville (“Keep your seat, Horace, I’ll get you there on time!”). Turn north (left) on Foothill Road.

From Carson City go south on US 395 and take Jack’s Valley Road to the west (right) at the top of the hill. This is the old stagecoach road too, built for wagon traffic, and it seems to meander on account of the rolling hills as it leaves the highway behind and even though we drive Priuses and Mercedes nowadays it still seems like horse-and-buggy country.

On summer weekends local volunteers man an information kiosk at the central intersection and are happy to help you find what you’re looking for. On other days and at other seasons you must rely on the internet, not nearly as informative.

Genoa’s historical attractions are the Mormon Station State Park, the Historic Court House Museum and the cemetery, all of them on the north side of town, and the Genoa Bar & Saloon, Nevada’s oldest such social center (est. 1853), a few steps south of Genoa’s central intersection. 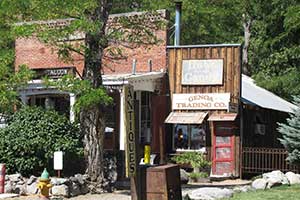 There is shopping too, an interesting collection of small shops, heavy on gifts and antiques, and four quite different places to eat. The Country Store at the heart of town offers a deli with home made ice cream, a full bar and tables outside where Shorty is welcome. The Genoa Station Bar & Grill is popular (hint: the fried tomato BLT) all day long (also outside seating), The Pink House, beautifully restored inside and out, is now a charcuterie (and you can get an excellent latte) and La Ferme is a regionally famous and classically French dinner house that draws customers from Lake Tahoe and Carson City as well as from around the valley. 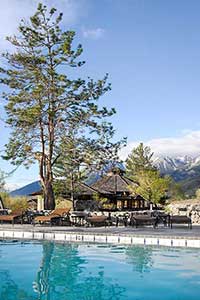 If you decide to stay overnight in Genoa you have three options: the Genoa Country Inn and two B&Bs, the Wild Rose Inn and the White House Inn, all maintained to the highest standard; advance booking recommended. 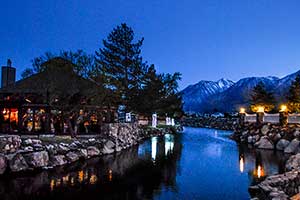 And then there is David Walley’s Hot Springs Resort just a mile or so south of town which combines all of Genoa’s attractions — food, lodgings and history — having been established in 1862 as a resort for the nabobs and wannabes of the Comstock Lode who came to loll about in the hot springs just as we still do today.

But it’s not all lolling around. There are bicyclists everywhere on the network of sparsely traveled two-lane roads, and hikers using the trails that have been developed in and around the valley. 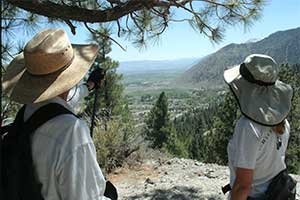 As for bicycling, that’s easy, just bring your bike, point it any way you like and go.

For hiking, consult the Carson Valley Trails Association for the details about the valley as a whole, or just the spectacular Genoa Trail System. And we can hardly overlook golf, which has brought visitors to Carson Valley for a generation now.

And so you can hardly avoid enjoying yourself in Genoa, which is why some visitors to the valley get no farther than this. Those who do get farther in find even more to like. Rather quietly the Carson Valley has become a cool place to visit, and we’ll come back for more before the snow falls.

A Postcard from Shorty: I went on the ramble to Genoa and had a nice time. I always have a nice time on our outings. 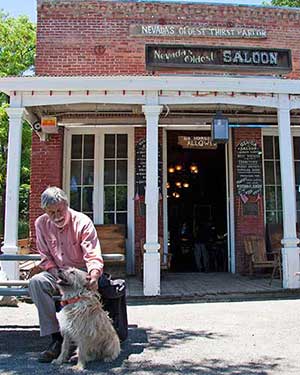 A lady from the state tourism office took my picture and asked a bunch of questions so she could write an article about me. Here it is. I can’t tell you how boring it is to be a celebrity. I want to yawn just thinking about it.

But we went to a real cool place for lunch! The Genoa Bar & Grill serves lunch outside, and that means I can find a spot under the table or near enough to nab any spills, and I always do well when I can use my pleading gaze to good advantage.

Also I’d give thumbs up to the Mormon Station State Park (if I had any) for its soft and yielding lawns. Always looking freshly preened and pretty, and so easy on the feet! Dogs are welcome as long as we’re properly leashed and picked up after. And I liked our stroll in the cemetery. I could smell dead people.