I visited Pahrump Valley Winery a little before Christmas, to see the changes that are being made in that historic enterprise.

The building is the way you remember it, with its trademark blue roof looming above the manicured grounds. And the restaurant is still elegant — well, actually more elegant since the recent makeover. The tasting room and gift shop have been expanded, and the winery itself has been outfitted with new equipment from Germany.

The winery was considered quite a novelty when it was established a dozen years ago or so, but this valley was well-known for wine production in the 19th century.

There are now eight varietals produced and bottled on the premises, made from carefully selected California grapes but zinfandel grapes are now growing in the vineyard and a 2005 zin will be bottled later this year, the first estate-bottled red to be produced in Nevada in more than 100 years.

Vegas). The road is four lanes most of the way now. There are concerts and other public events held on the tree-shaded grounds in good weather but the biggest event of the year is the annual Grape Stomp, held the same weekend as the Pahrump Fall Festival, which will be September 25th through the 28th this year.

I was informed by Senator Bob Beers that my list of Nevada actors was incomplete. Matthew Gray Gubler, who plays Dr. Spencer Reid on the CBS show Criminal Minds is a Las Vegas native. Adds Sen. Beers: “His mother is Marilyn Gubler, former state GOP chair, my seventh grade English teacher, and owner-operator of a Sandy Valley cowboy ranch for tourists.”

And, I am corrected by my friends at the Central Nevada Museum: It wasn’t the Stealth Bomber that was tested in and around Tonopah, it was the F-117A Stealth Fighter. Now they’re being retired, and their last flight is back home to Tonopah. In May of last year six F-117A Nighthawks arrived at the Tonopah Test Range to be tucked away in their original hangars with their wings removed. Most obsolete Air Force planes go to a facility near Tucson, but some aspects of the F-117 are still classified, so they’re being kept under wraps. Eventually all 55 of the $45 million F-117As still flying will be back in their hangars at Tonopah, replaced by the F-22A Raptor.

That Museum web page, by the way, is a part of the redesigned and much improved Tonopah website which also has a section on the excellent Tonopah Mining Park. 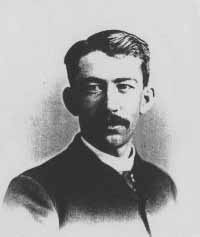 This might surprise you: Nevada is 10th among the states for bird species diversity and 4th (tied with Oregon) for breeding species diversity. This rich inventory brings birders to our flyways and byways in search of elusive critters, and plans are being laid to attract more of them (birders, that is, not birds). Here’s a well-regarded birding site focusing on southern Nevada.

“A Birding & Wildlife Viewing Trail idea makes sense along US 93,” one survey suggests. “Laughlin, Las Vegas, Alamo, Caliente, and Ely can also serve as hubs (as it is anticipated Beatty, Pahrump, and Tonopah will be able to do based on forthcoming site assessments in those regions) for numerous birding and nature tourism opportunities found by radiating outward from each community. The area along US 93 Corridor from Laughlin north to Ely is remarkably varied, highly scenic, and full of marketing opportunities.”

And if you think birdwatching lacks drama, check out the entry for Monday, January 30, 2006 on the Bird Watcher’s Digest blog.

And if you still think birdwatching is for pantywaists, try this: the Carson Valley‘s Eagles

On Wednesday morning, February 20, participants will have a group tour of area ranches and can observe and photograph birds of prey up close as they gorge themselves on the nutrient-rich afterbirths during the winter calving season.

On Friday evening, a Birds of Prey Lecture and Cocktail Reception will feature a wildlife biologist with his live falcon, a local falconer with his live Northern Goshawk, and another falconer with his live Ornate Hawk Eagle. And on Saturday a second group tour of area ranches will be followed by a buffet lunch and group discussion on sightings. After that, there’s an Owl Prowl (visits to nearby barns and owl habitat) & Live Bird Field Demonstration. You can buy tickets here.

The Silver City Guard was called out for emergency duty in Carson City early in December, when Dayton artist Steven Saylor needed models for a painting at the Governor’s Mansion. Saylor is painting a representation of the 1909 dedication of the historic structure for its centennial in 2009.

The Guard, formed in 1860 and wiped out by Indians at the Battle of Pyramid Lake, is Nevada’s oldest military unit still under arms. Designated as Armed Rabble, its specialty maneuver is the Tactical Withdrawal. It has received unit commendations for Graceful Disengagement, and is second to none when it comes to Pell Mell Retreat and the even more demanding Running For Their Lives. The modern Guard is best known for capturing the Bi-Centennial Wagon Train on its approach to Silver City in 1976.

Ely’s Fire & Ice Festival is scheduled for January 19 and 20 at Cave Lake State Park. Last year’s event is featured on YouTube, and you can find a calendar of 2008 events in White Pine County here . . . Speaking of Ely, the Jail House Motel and Casinoacross Aultman Street from the Hotel Nevada has been acquired by the incomparable Jim Marsh, proprietor of Tonopah Station in Tonopah, the Longstreet Inn & Casino at the California border in Amargosa Valley, the Santa Fe Saloon in Goldfield and other landmark Nevada properties . . . The Aquarius Casino Resort in Laughlin is beginning nearly $20 million in room renovations in early 2008. The resort has already spent $40 million to overhaul the overall property of the former Flamingo Laughlin. The Aquarius is the Laughlin’s largest, with 1,907 rooms in two 18-story towers on 18 acres on the west bank of the Colorado River . . . Word has only reached me now that a Churchill County landmark burned down in July. The Salt Wells Villa, a brothel on US 50 some 15 miles east of Fallon, was torched early on a July morning, destroying the old trailers that comprised its workrooms.

View the damage here. It had been closed since 2003 on account of health and building code violations. If I remember correctly, the old pleasure parlor had been firebombed previously by the wife of a Churchill County Sheriff whose husband was spending too much time fighting crime there. Another brothel nearby, the Lazy B, also stands idle and shuttered. Still, a 2004 ballot measure that would have repealed legal prostitution in the county was voted down in a landslide . . . And if you’ve never been to Fallon, you can get a glimpse of its wonders here . . . Keith LaPaille of Minden had a queen-high straight flush in a Texas Hold Em’ game in the Carson Valley Inn Poker Room — but he knew something was up when Claudia Skaggs of Stateline kept raising him. “It was a great position to be in” thought Keith, “I knew I couldn’t lose because of the CVI Poker Room’s Bad Beat prize.” His suspicions were confirmed when Claudia showed her king-high straight flush. Two straight flushes in the same hand! The $1,000 Bad Beat prize was spread out as it is whenever a four-of-a-kind or better hand is beaten by a higher hand. $500 went to Keith, with the beaten hand and $300 to Claudia, the pot winner. The remaining $200 was shared among the other players at the table, who had dropped out early. Everyone’s a winner except the Carson Valley Inn which, if it were a person, would have got up from the table shaking its head.

Overheard at the Overland Hotel in Fallon: “So tell me what you think, Irene, is man God’s big blunder or is God man’s?” 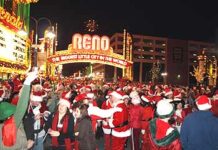 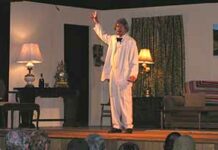 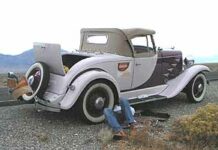 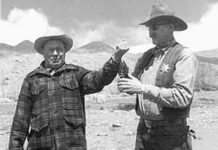 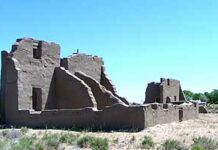