Home Snowbound at Tahoe: The Wettest Start to Winter on Record

Snowbound at Tahoe: The Wettest Start to Winter on Record

by Mark McLaughlin, The Storm King

December 18, 2016 — Heavy rain and high-elevation snow this October and December have gone a long way to mitigating the extreme drought conditions plaguing the Tahoe Sierra. A series of strong Atmospheric Rivers from the Pacific Ocean have pumped up water levels in Lake Tahoe. For the first time in months a strong current of water is now flowing into the Truckee River and the official start to winter is still days away!

The 28.4 inches received since October 1 is more than 50% of what the region averages in a year. In many locations the month of October was the wettest of record.

One storm alone added 11 billion gallons to Lake Tahoe, raising it 3 inches. Despite the boost, Big Blue still remained more than 2 inches below its natural rim. The current pace of precipitation is better than the beginning of Winter 2011, which ultimately ranked in the Top 10 as No. 8 wettest since 1871.

The most recent Atmospheric River this past week delivered nearly six inches of rain in 24 hours. With a summit near 11,000 feet, Mammoth Mountain Resort near Yosemite was slammed with nearly 5 feet of snow on December 16; the California record is 68 inches in 24 hours. Tahoe resorts currently boast upper mountain bases ranging from 3 to 4 feet while Mammoth Mountain’s snowpack is already 11 feet deep up top.

Despite relatively high snow levels in recent storms, the ski slopes are looking good for this time of year. Just in time for the crush of crowds that will be showing up for the holidays.

Early December at Donner Peak as viewed from Old Highway 40.

Sunday January 8, 2017 —  Conditions are ripe today and tomorrow for a major flood in the Tahoe Sierra after previous cold storms dumped close to 8 feet of snow on area resorts this week. Temperatures have warmed considerably since early this week as a potent Atmospheric River of moisture surges into the West Coast. During a 36-hour period that began last night we’re expecting between 6 to 12 inches of water, mostly rain below 8,000 feet in elevation. NWS forecasters are warning that rivers and streams are at high risk of flooding, similar to the 2005-06 event which caused $300 million in damage to California.

Tahoe has received record amounts of precipitation so far this winter. Squaw Valley USA recorded 94 inches in the past 7 days and the power has already flickered several times this morning. Here in the “Banana Belt” at Carnelian Bay we picked up only 3 feet of snow during the storms this week.

Placer County’s snow management is second to none. Within a day or so after the snow stopped falling this rotary snowplow was grooming the residential streets of Carnelian Bay.

This is today’s infrared satellite image from 8 kilometers above the planet’s surface. It shows the classic synoptic pattern of an Atmospheric River with moisture surging into California. A stalled, deep low pressure system off the coast of Canada is spinning in a counter-clockwise rotation bringing copious moisture up from the subtropics. If the cold Alaskan low was closer snow levels would be lower and the Tahoe Sierra would be experiencing many feet of snow as opposed to flood potential.

Statistically, the Truckee River experiences a damaging flood every 9 years or so. It’s been 11 years since the 2005-06 event. This storm is right on time! Heavy rain and wind continues to slam the Sierra today and tonight.
– – – – –
January 10, 2017 — A Blizzard Warning is in effect for the Tahoe Sierra until tomorrow morning. Heavy snow driven by high wind has created whiteout conditions on area highways and forced I-80 in the heavy snowbelt to remain closed all day. Placer County Emergency Services is doing robo-calls to alert residents that travel on regional roadways is highly discouraged except for critical needs only. And for the third day in a row, most Tahoe ski resorts remained shut down due to flood danger followed by overwhelming snowfall and avalanche concerns.

Flood-related damage is being reported all over Northern California and Western Nevada, but main stem river flows on the Truckee, Carson and Walker rivers did not reach the destructive level they achieved during similar conditions in 2005-06 and not even close to the catastrophic New Year’s Flood of 1997.

Snow began to pile up and picked up close to 5 feet of snow in the past 30 hours at the Lake. Snow management gets to be a full time job during storms like this!

Squaw Valley looked pretty good when I there in mid-December, but the popular KT-22 chairlift was not running due to a lack of cover. Since my visit the upper mountain has picked up an additional 12.5 feet of snow not counting today’s blizzard. Once our weather settles down, skiing and snowboarding are going to be epic, just in time for the Martin Luther King, Jr. holiday this weekend.
– – – – –
January 18, 2017— It’s snowing again as the first of 3 storms this week moves onshore from the Pacific to bring more snow, maybe reaching 5 feet in the upper elevations near the Sierra Crest by Monday. Hopefully no one will fault me for wanting a break from shoveling massive amounts of heavy snow. Plus, after experiencing 4 days without electricity last week, I can tell you that no one in my neighborhood wants to see more falling trees taking down power lines.

At lake level in Carnelian Bay the snowpack is looking impressive for so early in the season. With any luck a break in the stormy pattern may be heading our way next week.

This January has been very productive when it comes to snowfall in the Tahoe Sierra.

Snow removal crews worked non-stop during last week’s storms so that when the crowds of people enjoying the Martin Luther King, Jr. holiday took to the roads this past weekend, our regional highway system was in good shape to handle the heavy traffic.

The snow was significantly deeper than this during the Top 10 winter of 2011, but we’re off to a good start this year. At 8,911 feet in elevation, the Mt. Rose Summit on Highway 431 is the highest year-round pass in the Sierra.

Mount Rose is an extinct volcano and both the highest (10,776′) and most topographically prominent peak of the Sierra Nevada range within the state of Nevada. Despite its name, Mount Rose Ski Tahoe is located on nearby Slide Mountain. The ski resort has the highest base elevation in the Tahoe Sierra at 8,260 feet, which means that the slopes there get snow when it rains at other resorts, especially during Atmospheric River events. The resort has picked up 380 inches of snow so far this winter (31.6 feet).

The east side of the Mt. Rose Summit is a heavy snow deposition zone and prone to avalanches. Highway crews use explosives to try and control devastating slides.
– – – – –
January 24, 2017 — The region is now recovering from overwhelming snowfall, frequent avalanches, resort closures, power outages and deadly tree falls. We are now experiencing a break from harsh weather, with the next surge of Pacific moisture about a week away.

Although many Tahoe Sierra resorts set their all-time monthly snowfall totals this January, they didn’t come close to the California record of 32.5 feet measured in January 1911 at Tamarack, California. Click here to see all Sierra Nevada snowfall records.

It’s the perfect time to hit the slopes with Tahoe resorts at full operation again.

But beware, big winters often provide drama and risk for residents and visitors in the mountains. On January 12, while crawling along in southbound traffic on Highway 89 just north of the Squaw Valley intersection, a Tahoe City woman was killed when a snow-loaded tree fell on her Subaru. 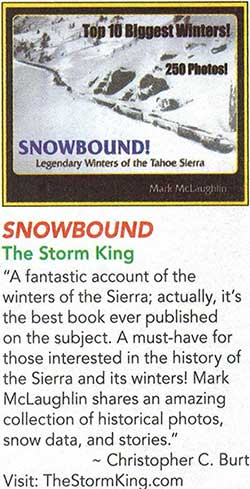 And on January 24 Squaw Valley ski patrolman Joe Zuiches was killed; apparently while conducting Avalanche Control on Gold Coast Ridge there was a premature detonation of one or more of the explosive charges that he was carrying.

This winter is still on a record-setting pace as the wettest starting for the Northern Sierra 8-Station Index. Reservoirs in Northern California and Western Nevada are filling fast and some early storage releases are already in progress.

Lake Tahoe’s water level has been on the rise since the first Atmospheric Rivers arrived in October. Currently Big Blue’s level is at 6,225.08 ft Mean Sea Level, well above its natural rim. This winter has also dramatically eliminated many regions in California suffering from extreme and exceptional drought, including all of Northern California.

On a lighter note, during the morning of Jan. 24 two young men traveling on Highway 89 near Alpine Meadows Road were hit by an avalanche and trapped in their car. The vehicle was suddenly buried under 6 feet of snow and David Ortiz and his roommate Neale were initially panic stricken. But after calling 911 and learning that rescuers were on their way the lucky pair decided to enjoy the moment and began taking selfies of themselves inside the snowbound vehicle. They were freed about 30 minutes later by first responders, one of whom took this photograph.